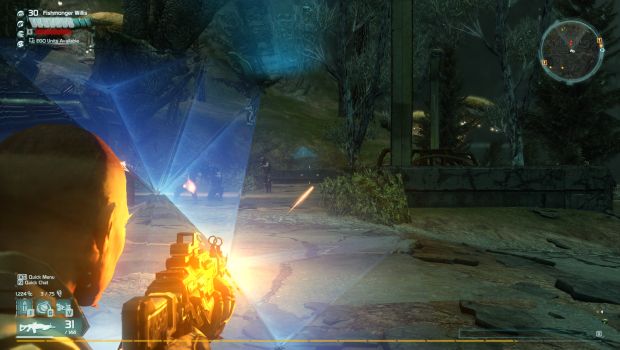 I sit down to write this review with a heavy heart, my friends, because I’ll admit I had rather high hopes for this game. Defiance is a third-person shooter/MMO that was intended to create a great deal of hype for the just-released SyFy series of the same name. However, as tends to happen with gimmicky side-by-side releases, the game itself is bland, uninspired, and repetitive. I could rattle off a host of other unpleasant adjectives, but the bottom line here is that I found myself coming up with excuses not to play this stinker.

The game starts out promisingly enough, with a cut scene whose voice actors sounded like they knew what they were doing, and writing that felt real and engaging. This may have been due to the novelty of playing a brand new game, which is always exhilarating to some degree, but the good times tapered off in a hurry. In truth, it’s a shame – I really enjoyed the initial immersion into the story, a fact that perhaps bodes well for the TV show, but like a quick and brutal deficit for your favorite sports team, my sense of well-being disappeared almost as soon as I’d started playing.

The first problems I encountered popped up during the creation of my character, contained in the fact that there were barely any customization options available. You’re given a scant number of different classes to choose from, none of which are imaginative or interesting in the least. The graphical presentation was lush, and everything seemed to be going off without a hitch, but when I realized how limited my character options were, an inky feeling in my stomach signaled that things had begun to turn sour.

[singlepic id=11715 w=320 h=240 float=left]With the crash-landing of our “ark”, a huge troop transport (apparently) whose destruction resulted in dozens of fatalities and a generally messed-up situation for the crew, the gameplay got underway. You’re given a sort of “I’m-supposed-to-be-helpful” companion named Ego, who acts as your guide through the barren landscape of large rocks and questionable physics. Ego appears as a neon-blue apparition with a voice that quickly came to sound about as soothing as nails on a chalkboard every time she repeated an objective (a frequent occurrence). Half the time I was thinking, lady, give me a second to get oriented, or I swear I’m going to exit so fast it’ll make your ghostly head spin – oh wait, the menu is completely convoluted; by the way, how on earth does this save system work, why can’t I find the exit button, and GOOD LORD I’M TRAPPED IN A GAME. Needless to say, this was not a pleasant train of thought. I struggled with the controls, which were anything but intuitive – imagine playing a piece on the piano that requires you to stretch, cross, and otherwise intertwine your digits in the most infuriating way possible. On my maiden voyage, I managed to last only about twenty minutes before quitting so I could play something else.

[singlepic id=11713 w=320 h=240 float=right]I like to think I’m a patient person. I work in IT support, and people complain constantly – I have to coddle and compliment them, without ever assigning blame, or I’ll jeopardize my job – but this game wore me out. As for the MMO elements, the seamless integration with other players out on a common mission was absent for the most part. It was usually impossible to find ammo crates, even though I repeatedly ran out of bullets, and enemies managed to detect me and swarm my position en masse at the slightest provocation – fun, if you like mowing-down-a-horde-type games, but how enjoyable can it really be when every single enemy is identical? For me, the lack of variety (on several levels) brought the game down from basic mediocrity to the realm of “this is just bad.” This glaring flaw may have been most noticeable in terms of the quests themselves, which were all of the “go-here-and-interact-by-holding-down-E” variety. Oh wait, now go here and interact with three objects using E! How kind of the developers to include some of that spice of life everyone’s always talking about.

[singlepic id=11712 w=320 h=240 float=left]A number of things could have saved Defiance, such as a more refined co-op system. However, people just didn’t seem interested in working together, and I’ll admit it may have had a lot to do with the novelty of trying out a game that was linked to an upcoming, overly hyped television program. The developers touted the “dynamic” events that would enliven the game from within, specifically ark crashes, where giant spaceships would randomly fall to earth, spewing loot and attracting all sorts of hunter-gatherer types. This was meant to create a real melting pot of gameplay, but in practice just fizzled and never went anywhere. Also, the graphics are pretty, but as any serious gamer can attest, sleek visuals mean nothing when the mechanics, plot, and engagement simply aren’t present. Graphics are merely one part of a complex puzzle that relies on all the ingredients to create a polished result, and Defiance fell well short of that mark. There are some enjoyable weapons you can pick up – the generic sniper rifle provided a few happy moments when I was tasked with picking mutant soldiers off a distant ridge – but before long they began to feel bland and unresponsive. The music consisted of little more than one atrocious, vaguely Skrillex-esque loop, which only played when you encountered a bit of action. The voice-acting was decent, salvaging what might have been an otherwise-total loss in terms of the overall soundscape, but the end product winds up as little more than a frustrating mess.

Defiance may have functioned as an interesting way (read: gimmick) to promote a series on SyFy that may have a shot at stabilizing the network’s bipolar ratings, but as a game, it’s barely playable. Perhaps those people (and I’m sure there will be many) who become dedicated aficionados of the show will in turn find this game to be a treat, as often happens with TV series based on games, and vice versa (although, now that I mention it, has that experiment ever been really successful? Anyone remember Survivor: The Game? Look it up, that thing was a disaster), but for people who are willing to shell out $60 of their hard-earned paychecks to download this problematic title, the price is far too high, and the payoff meager. Check out the show, by all means – it looks like a refreshing, shoot-‘em-up romp through the distant future – but at the end of the day, I defy you to play this thing and enjoy it for more than fifteen minutes.