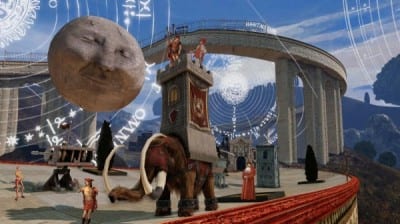 Amidst a sea of XBL arcade titles released in the past several months, Rock Of Ages made its timed exclusive debut at the end of August. We’ve had some time to check it out and share with you what does pass for rock, and what is merely roll.

The single player campaign, really the meat and potatoes for Rock of Ages, sees your progression from the humble beginnings of Sisyphus as he frees himself from the punishment of rolling a boulder uphill in Hades. After breaking out, you begin a series of battles through five distinct ages, each represented by the of art of their respective time periods: Ancient Greek, Medieval, Renaissance, Late Baroque and Goya. Being neither an artist or a student of art, I could identify the period but not the art styles themselves. Sounding too serious? Don’t worry, most of it is used in parody very much like the antics of Monty Python animated interludes and has no bearing on the game itself.

[singlepic id=3342 w=320 h=240 float=right]
In fact, the presentation and cutscenes are just missing some hideous monster eyes and some killer sheep to be right from Cleese and crew – the animation and humour is dead on, and the only modern equivalent of the animation style I can think of is a kids show called Wonder Pets. There are moments in Rock of Ages that are simply brilliant during the level loading screen, but you will likely see them more than once and they quickly get old. You can skip by them once the level is loaded though, so at least you’re not forced to watch them in their entirety each time you fail a level.

The basic game is about one quarter tower defense to three quarters navigating your somewhat fragile boulder down your opponents defended paths to break down their gate to squish your opponent. As you take damage from the defenses or running into solid objects, your boulder breaks apart bit by bit, layer by layer. The smaller the boulder and the slower the impact on the gate, the less damage you do. Under normal circumstances you’re looking at around 3 boulders to win a match unless you’ve managed to score several perfect hits with either full size and momentum or a boulder upgrade. To pay for those upgrades, it is generally a good idea to hit civilian buildings as they earn you more money. You can also use this money to purchase more reinforcements to defend your own path, including towers to defend, animals to herd and disrupt, catapults to damage, giant fans to throw off course, aimed trebuchet shots from your own castle, dynamite, and the like. The problem I had was that until you get half-way through the game, you don’t have enough experience or equipment to create solid choke points where you can use catapults, elephants and the like to actually successfully destroy your opponents boulder, and so the defense of your own castle was secondary to running their gauntlet. In fact, the only point to the tower defense until being out of the Renaissance was to simply slow them down enough for you to get your boulders down there first.

[singlepic id=3340 w=320 h=240 float=right] I have to say, it took a while for the gameplay to actually click with me. The controls for the tower defense portion take some getting used to, and if you zoom out you can move a little faster along your own run, but the problem is that you often cannot move fast enough, or with the pinpoint precision that the enemy does to find and fortify choke points – you end up zooming in and out a lot. The placement of units is a frantic act, since you only have a a short amount of time to select, place and then repeat before the next boulder is ready. Waiting is rarely an option since it is an unlikely event where you will successfully destroy an enemy boulder (certainly in the first half of the game). That means by sitting by and not launching immediately is giving your opponent a clear advantage. Giving more time to set up defenses would have been a welcome addition – even just for the first boulder – just to allow you to familiarize yourself with the level. What it really comes down to is that the controls in the map mode coupled with a camera that sits just slightly too close to the boulder feels like an unfair advantage when the enemy AI is quite swift in its placement and steering of its own stony payload. I found myself simply accepting a loss on the first match just to find hidden keys and get to know the shortcuts and ins-and-outs of each map.

The rolling rock portions were satisfying in terms of the weight of the boulder and its ability to crush buildings – the Unreal 3 engine holds up very well in that portion of game, even if the controls for the tower defense are awkward and less precise than I’d like it to be. I also found myself feeling the rush when you really get moving – managing to keep up your momentum through an entire run and actually hitting the gate was certainly fun, even if it is a rare occurrence. Speaking of fun with giant rocks, at the end of each of the five ages there are boss fights which were a blast.

[singlepic id=3343 w=320 h=240 float=left] On the flipside, the multiplayer aspect of Rock of Ages isn’t really all that compelling. Head-to-head is just an extension of the single player gameplay, and perhaps that may be more balanced, but it isn’t terribly exciting. I think something like a map designer mode, or a two-player co-op mode where two people work together on each side (against either AI or another two opponents) would up the ante in terms of strategy and game re-playability. The skeeball option suffers just as much – it is simply revisiting the same levels only to try and land in a skeeball scoreboard rather than break down a gate. You can maneuver yourself and get the optimal speed quickly, and once again, it’s appeal was overshadowed by how much creativity went into some of the animations.

Rock of Ages is by no means a bad game, but it doesn’t last long, and the things to bring you back for more are, well, more of the same. I did have fun with it, and I’d recommend it to those who can appreciate the presentation and aren’t quickly frustrated by an AI that seems to have an unfair advantage. If you’re one of those who has to have the highest score, this may also appeal – just don’t expect to see everyone on your friends list contributing to your need for a challenge.