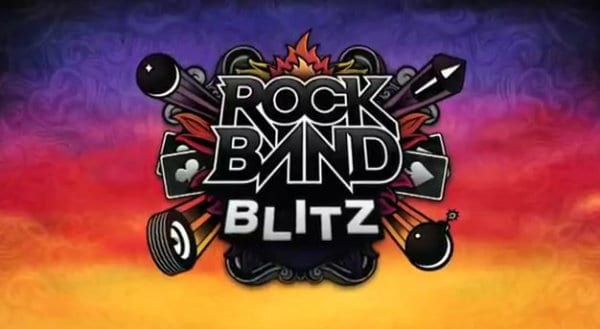 If you’ve been a long time reader of Gaming Trend you’ve probably noticed that I’ve reviewed nearly every single music game ever released. From guitars and keyboards to DJ tables and my ION kit, I own a few peripherals – if anyone knows anything about ‘lugging instruments into the living room’ it’d be me.  There are plenty of folks like me who still wait with baited breath for whatever tracks are coming from Harmonix each week, but plenty of folks have lost the bug for Rock Band.  They may still enjoy playing music titles, but their plastic guitars may have broken.  Harmonix has something that just might bring you back to the fold, only this time you won’t need sticks, picks, or midi adapters.

After the quick 356.43 MB download and a short synch with my downloaded Rock Band 3 library (only the DLC items – not the stuff on the disc, unfortunately) it was time to finally take Rock Band Blitz for a spin.

Similar to Rock Band, there is a quick pair of tutorials to play (if you choose) to learn the basic mechanics of the game, or you can immediately jump in and play. In Rock Band, the meter on the left showed just how close an individual band member was to failing out of a song.  Since that’s not an option here, it instead shows the level for that particular instrument.  Each track needs to be leveled up individually to gain multiplier points to push towards the five star goal.  You do this by using the triggers to move between tracks and by pushing the thumbstick and A button to play the notes that come up on either the left or right of that lane, respectively.  The only other button you’ll use is the X button to occasionally unleash your power-ups – the control scheme couldn’t be any more simple.  It doesn’t necessarily make it any easier, but it IS simple.

[singlepic id=8849 w=320 h=240 float=left]You unlock power-ups through Blitz Cred.  You use those power-ups from your coins that you collect for your song performances.   Playing a new song nets you double coins, encouraging you to try out those tracks you might have avoided when you were playing Rock Band 3. After your song you’ll be rated on your accuracy for each instrument, with a cred multiplier being used to compensate up or down for difficulty.  This is in addition to the usual score / stars scoring method used throughout the series.  It really underscores one of the major underpinnings of Rock Band Blitz – it’s not about how well you play, it’s about what you play and when.

Earning 5 stars is not like it was with Rock Band.  Being a drummer most of my life I sat down and cracked out a 5 star performance on Hard on my first brush with the original Rock Band title – that isn’t likely to happen with Rock Band Blitz.  Without power-ups selected you’ll likely only be able to eek out a 3-4 star run.  In between tracks you’ll find the same little comedic outtakes that were present in the loading screens of previous Rock Band titles. For instance, you’ll get a power-up called “Super Bass” which declares “Bass notes are worth more points! (Bassists, however, are still not worth that much.)” as well as little pokes at the drummer, singer, and even Harmonix alums who worked on the game.

The power-ups I mentioned are really the heart of this game.  What power-up you pick can make the difference between an easy performance and a frantic one.  Your power-ups are split into three categories – your Overdrive Power-Up (6 in all), your Note Power-Up (4 here), and your Track Power-Up (6 here).  Here are a few broken out for you:[singlepic id=8847 w=320 h=240 float=right]

All of these power-ups combine into something we’ve not really seen a lot of in the Rock Band franchise – strategy.  The difficulty ratings might compel you to use the point multiplier for vocals on “Moves Like Jagger” from Maroon 5 as they rate 5 demon heads.  You might use the Bandmate to play a difficult track while you gather overdrive energy on another track to keep him going.  Since your multiplier cap only increases when you’ve got the whole band going strong (read: leveled up) when and how you use those powers is crucial.  Since you can’t select three instrument-specific power-ups at once (remember – one per category) you’ll have to choose wisely when you tackle the stuff in the “Impossible” category of your library.

[singlepic id=8838 w=320 h=240 float=left]Leveling up happens at the end of what Harmonix is calling “Checkpoints”.  You’ll only have a short amount of time to get everyone leveled up before the next checkpoint resets the lanes.  If you’ve got roughly half of the crew at max level at that point you’ll probably get a +1 maximum level bump, allowing you to raise your multiplier by just one.  Getting the whole crew up there can get you +3, whereas having some laggards in the crew (that boring drum track on “Moves Like Jagger” as a for-instance) will cost you as you may get +0.  Leveling up all of your tracks is the only way you’ll succeed at this game.

Power-ups aren’t the only trick in your arsenal; accuracy still matters.  When you’ve played accurately enough you’ll fill the bar above the lanes and unleash the titular “Blitz Mode”.  This mode accelerates the speed of the tracks quite a bit, netting you additional points if you can keep up.   It was at this point that I was most reminded of earlier Harmonix efforts – namely Frequency and Amplitude.  With the rolling hills and twists and turns it was easy to see that the team had returned to familiar territory.

With the speed of what’s going on in the lanes, it’s no wonder that the folks at Harmonix haven’t pushed the graphic engine very hard.  Colors are vibrant and clean, giving you a nice HD interface that serves its function without becoming cluttered or cumbersome.

On the soundtrack side of things, I have to admit I’m somewhat less impressed.  We have a few tracks like “Death on Two Legs” from Queen, “Moves Like Jagger” from Maroon 5, “One Week” from Barenaked Ladies,  “Shout” [singlepic id=8841 w=320 h=240 float=right]from Tears for Fears, and a few other decent tracks, but I have to say that the 25 tracks included just don’t blow me away.  Thankfully, all of my DLC (over 300 tracks) were imported when the game began, so I could conceivably play for months without repeating a track.  This feature alone makes up for the ‘meh’ track list and gives the game some legs.  The fact that tracks purchased on the Rock Band Network are immediately usable in Rock Band 3 is just one more example of what I’ve said all along – Rock Band is the platform, and we are simply renting the tracks.  That alone makes up for any library shortcomings.

So after cranking through several hours of Rock Band Blitz I come away with somewhat mixed feelings.  Blitz doesn’t give me the same satisfaction as cracking out a great track from Slipknot on my drums, but I don’t think that was the intent.  Seemingly aimed at a more casual or space-constrained audience, Blitz revives interest without the need to drag more plastic into your living room.  In the end I came to the conclusion that made the most sense – Rock Band Blitz is another accessory for my Rock Band experience.   When you stop thinking about it as a separate product, picking up this downloadable title just makes sense.