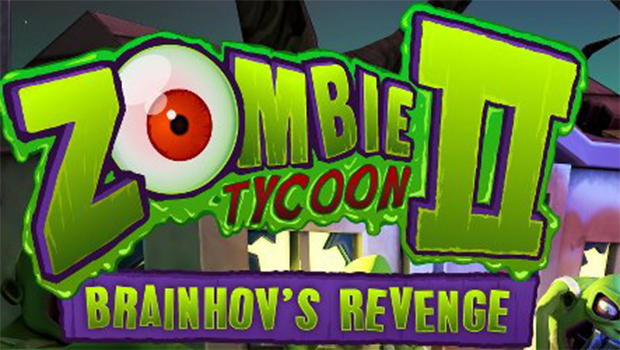 Just when you thought it was safe to remove the boards from your windows and doors, here comes Zombie Tycoon 2: Brainhov’s Revenge. This followup to the original 2009 PSP title designed by Frima studios puts you in control of a vicious zombie horde that will demolish anything on your path to total world domination.

Most fans of classic real-time-strategy(RTS) titles like Command and Conquer or StarCraft probably gave up trying to navigate armies using a console controller a long time ago. I remember the first time I tried playing the PlayStation port of Red Alert…all five minutes of it. There really is no substitute for a mouse and keyboard for selecting and organizing units. I’d pretty much lost all hope on ever playing a decent RTS title on a console system. But guess what: the controls in Zombie Tycoon 2 are awesome!

[singlepic id=12491 w=320 h=240 float=right]Rather than adapt the click and drag, mouse and keyboard system, Zombie Tycoon 2 assigns the four selectable unit types to each one of the four controller face buttons. So moving your entire army is as simple as pushing one of the four face buttons. It works beautifully and I had the hang of it within a few minutes.

The single player campaign is a good warmup for the control scheme and unit familiarity. With only eight missions, it is a little short with not a great deal of variety. But the length of some of these levels makes up for it, with completion sometimes taking over an hour. You control the two opposing zombie factions lead by Professor Archibald Brainhov and Doctor Orville Tycoon as you move through towns and decimate buildings. Each building you take down adds more zombies to your horde, making you more powerful against enemies like the police, army, and rednecks.

The units are unique and diverse and you’re given the choice to select the ones best suited for your task. Engineering zombies can do things like operate machinery and the cleaner zombies are there for safely removing toxic waste from the field. There are even Samurai zombies, which I thought was pretty cool.

[singlepic id=12493 w=320 h=240 float=left]The cartoony presentation is topnotch and entertaining and probably my favorite thing about the game. The clever cutscenes are all performed without words in a charming approach similar to the ones found in the LEGO games. The characters are very expressive and the whole thing feels like you’re playing a show on the Cartoon Network. It’s very high quality and a lot of fun.

But not everything is stellar. I did run into a few glitches like game freezes and units standing in place, refusing to move.  I was forced to reset more than once (did I mention levels taking over an hour?). I also found the missions to be repetitive and linear in nature. There’s a great deal of trial and error involved and there aren’t a lot of options for taking a level. The simplified control scheme comes at the price of limiting the strategy involved. Once I figured out how to beat one level, I felt like I was doing the same thing over and over.[singlepic id=12495 w=320 h=240 float=right]

And that’s where the online multiplayer mode comes in. You choose your faction, choose you monster and set out to embarrass your friend or a random online opponent. The online players I battled were much more challenging than the singleplayer CPU. Even though I lost all my matches, I still found it more engaging than the repetitive play found in singleplayer. Either there are some really good gamers out there or I just really need to practice.[singlepic id=12492 w=320 h=240 float=left]

I thoroughly enjoyed Zombie Tycoon 2. It surprised me with its innovative RTS console controls and it won me over with its charming sense of fun. It’s a simmered down alternative to StarCraft and a good entry point into the RTS genre. It’s unfortunate that a few technical faults and the repetitive single player bogged down the title from being as great as it could have been. But I still recommend this to any casual fan of RTS who enjoys a nice challenge on multiplayer.  Now if you’ll excuse me, I’m going to go practice my zombie leadership skills. Maybe I’ll see you there.