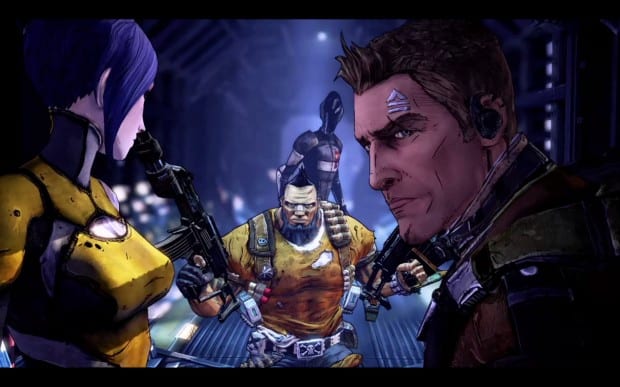 Funny thing about writing reviews – when your subject isn’t on your most-wanted list, it’s a little easier to be objective, but more importantly it means to don’t have to plow through your favorite titles at breakneck speed. I’ve spend a LONG time on Pandora, both in the original Borderlands PC release, and now on Borderlands 2. Is it worth owning? Yes. Have I completed the single player campaign yet? No, and here’s why: Borderlands 2 is big. Really big. With 24 full hours logged into the game (thanks to Steam for keeping track), I find myself getting distracted with completing side quests, and opening everything within reach. It’s a credit to the game that has me saying “I’ve got time to open one more box”.

[singlepic id=9191 w=240 h=180 float=left]Borderlands 2 builds on the elements of Borderlands in every aspect. From the cooperative multiplayer to the maps and enemy variety, it’s all fun. Isn’t that what we’re looking for in this none-too-serious romp in a mission to open Pandora’s hidden vault? The game is built to play cooperatively, and it does so very smoothly. The drop in option exists, or you can set your game to private if you’re feeling anti-social. The game will scale based on number of players and their level, so don’t expect your buddies to completely overcome the game’s challenge. I actually found myself thinking that I should invite some friends in while pursuing the single player campaign – the classes help fill each others weak spots out, and while playing solo is solid, going cooperative is the best way to experience Borderlands 2.

[singlepic id=9189 w=240 h=180 float=right] The combat is fast and fluid, and each character has a special ability and three skill trees to pursue. Though the style of gameplay is straight-up shooter fare, in almost every sense Borderlands 2 stands apart from the FPS genre with its Diablo-esque influence. From the multiple character classes to skill progression trees, weapons, armor, and the obligatory skills enhancements all reek of RPG – right down to fountains of loot that spring forth from your fallen foes.

There is no auction house, but you can transfer stuff you find from character to character, though you will need to meet minimum character levels to use equipment. One nice touch is they’ve done away with character weapon experience, and instead of having hollow achievements that provide no tangible benefit, Gearbox saw fit to change it up with the Badass Gun System. Basically, as each character you play experiences elements of the game (killing bullymongs, for instance) Borderlands 2 keeps track of the achievement and level. When you hit a milestone, you’re awarded Badass points for the achievement, and eventually you get tokens to exchange for stat bonuses for everything from gun damage to shield recharge rates. The bonus values are common across all of your characters and are entirely optional. With them turned on it means your bonuses can give you an advantage on any new ‘toons you create.

[singlepic id=9192 w=240 h=180 float=left] Gearbox did not simply lift the old games assets – the cel-shaded graphics are well done, and the environments feel less sparse. I found that with an ancient quad-core CPU,  Nvida 460GT, and 8GB of RAM the performance was a little lacking initially (with all elements turned up ), however moving the content onto a solid state drive (SSD) made a world of difference. With the PhysX engine on, Borderlands 2 does a fantastic job of adding to the immersion as explosions and dirt spray from stray bullets add a lot to the visual experience. I was particularly impressed with the Sirens’ phaselock ability, and how it draws any loose debris into the globe that surrounds the target. While on presentation, I should point out that the sound effects are no slouch either- Borderlands 2 gave me no reason to gripe about the noises it makes.  Even more surprising is that the voice acting is even better than Borderlands. In fact, I’ve laughed out loud many times  – including moments of  storyline as well as random comments and enemy taunts.

[singlepic id=9188 w=240 h=180 float=right] Borderlands 2 isn’t by any means perfect. I ran into a few bugs in the time I’ve logged with it – including one where the game would not let me progress. I was playing a third character to get a feel for the different classes, and while I had just completed a quest to take me to Sanctuary by escorting Claptrap onto a boat, he didn’t recognize that we were there. I had to save and quit, having no other option since this was the opening area. That also meant I had to wade through all the enemies all over again as there was no close teleport station, and since bosses respawn, I had to face Captain Flynt again (though I managed to run past him). It was by no means a show-stopper, but I’d be remiss if I didn’t point it out, or the occasional time where you get yourself or your vehicle stuck on the landscape. Overall these are nitpicks in an otherwise well crafted open-world game – it isn’t something that should put you off.

[singlepic id=9195 w=240 h=180 float=left] The PC release was promised to get some lovin’, and boy did it ever. Full video options including being able to adjust the field of view (FOV) with a slider. The interface works well with the keyboard, though I do wish they would have included the WSAD working as the cursor arrows in the menu system. It did manage to completely skip the feeling of being just another console-to-PC port. It also doesn’t hurt that it gets all the benefits of the Steam platform, and unlike another major PC RPG release this year, Borderlands 2 includes voice-comm built-in. If you like piles of guns, lots to do and shoot, and a robust leveling system with a natural coop multi-player aspect and aren’t put off by the cel shading, it’s a no-brainer. Borderlands 2 is one of the must-have games this season, and I expect to be playing it well into the winter. With at least 4 DLC addons planned for release over the course of the next year, there will be even more to do in Pandora for the foreseeable future (assuming the Mayans were wrong).