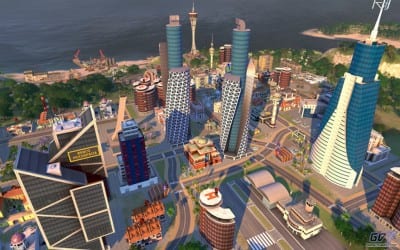 For players who liked Tropico 4 and wanted more, the Modern Times expansion will be a bit of a disappointment. There is a good chunk of new content, but none of it changes the game in a notable way. At 1200 Microsoft Points, this expansion pack needs more substance.

Tropico 4 continues the series of sim-games that is set on a fictional Caribbean nation called Tropico. The player takes the role of El Presidente, a dictator who builds Tropico from the ground up.

Players will quickly realize though, that these new buildings and political choices (known in Tropico as Edicts) are just repackaged versions of the original games content. Organic farms grow more corn, but they still grow corn; high rise apartments are just bigger than their counterparts.

The new buildings are, however, very visually enticing, turning the tropical world of Tropico into a metropolis.

The only addition that really amounts to a new feature is the introduction of telecommunications. Much like electricity in Tropico, a Telecom HQ can be built, allowing the player to give telecom coverage to a portion of their island. Armchair-dictators can choose to police internet usage and decide how telecommunications will affect their island, but the effects are so minuscule that only dedicated power players will be able to take advantage of this. Limiting social media on your island will nullify the game’s connection to real-world social media, a feature that, while referenced in the Edict’s description on the Xbox, is only available on PC.

One would hope that bringing Tropico 4, a game with a very unique concept, into a different era would enrich the gameplay, but this is nothing more than a facelift. Tropico 4 is a great sim-game with fun mechanics, but an expansion pack should bring more than the surface-level changes presented by Modern Times. Third-world politics have fundamentally changed in the 21st century, yet the world of Tropico has been left behind.