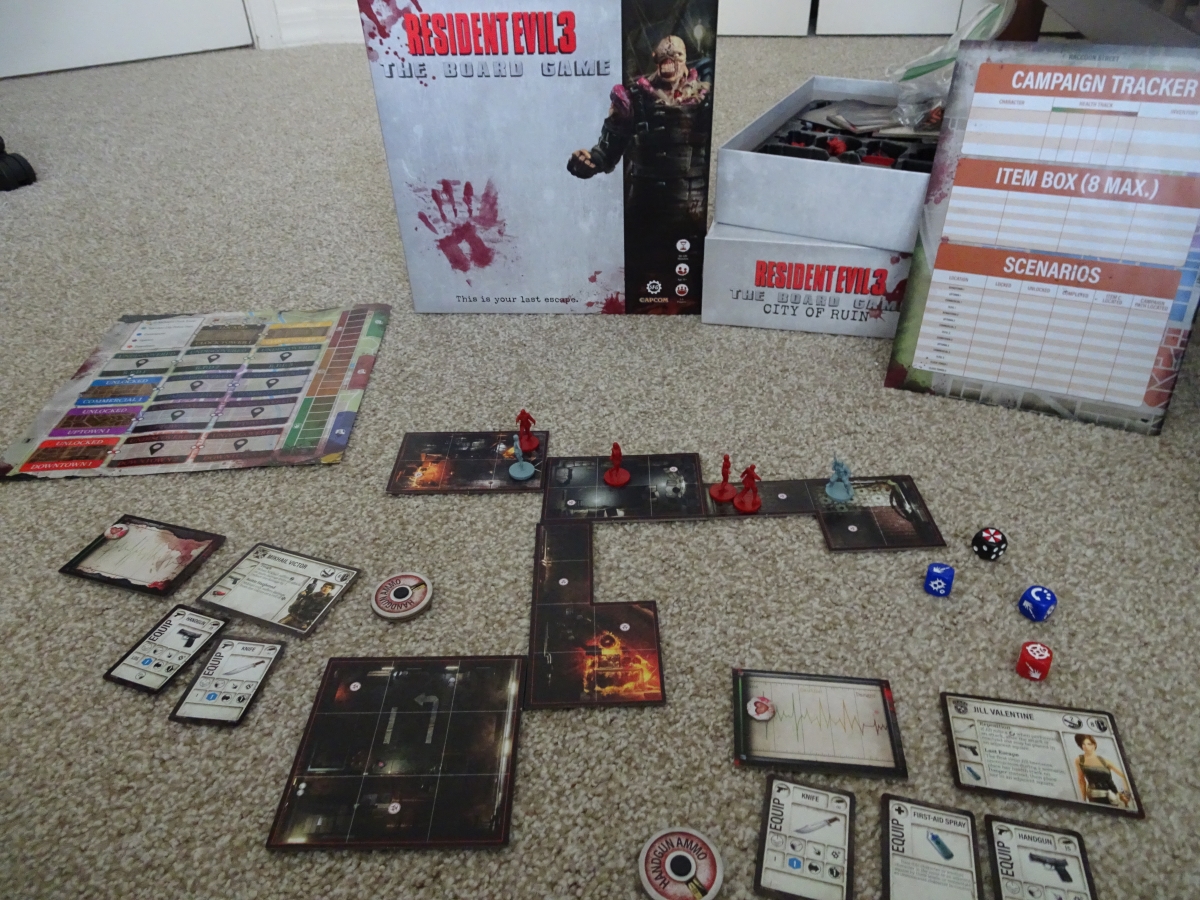 Resident Evil 3 is a 1-4 player campaign style board game based off the PlayStation 1 game, that has players navigate zombie-filled streets in a tactical fashion while constantly dealing with dwindling ammo. Ground-breaking at the time, the original three Resident Evil video games spawned a slew of sequels, clones and copies over the years, and having a board game that goes back to the basics is a welcome surprise. The game is based both on the previous board game, as well as the original source material of the Playstation 1 game, now over 20 years old. Setting up premade levels, players will fight their way through various scenarios ultimately trying to find the escape route out of the city.

Taking on a surprising challenge of trying to transform a 20 year old survival horror game in a campaign style dungeon crawler perhaps isn’t the first thing people think of when trying to make a series of board games. However, while there are some clear problems, once players get into it the overall package offers a legitimate good time and accurately captures some of the feeling of the original series. 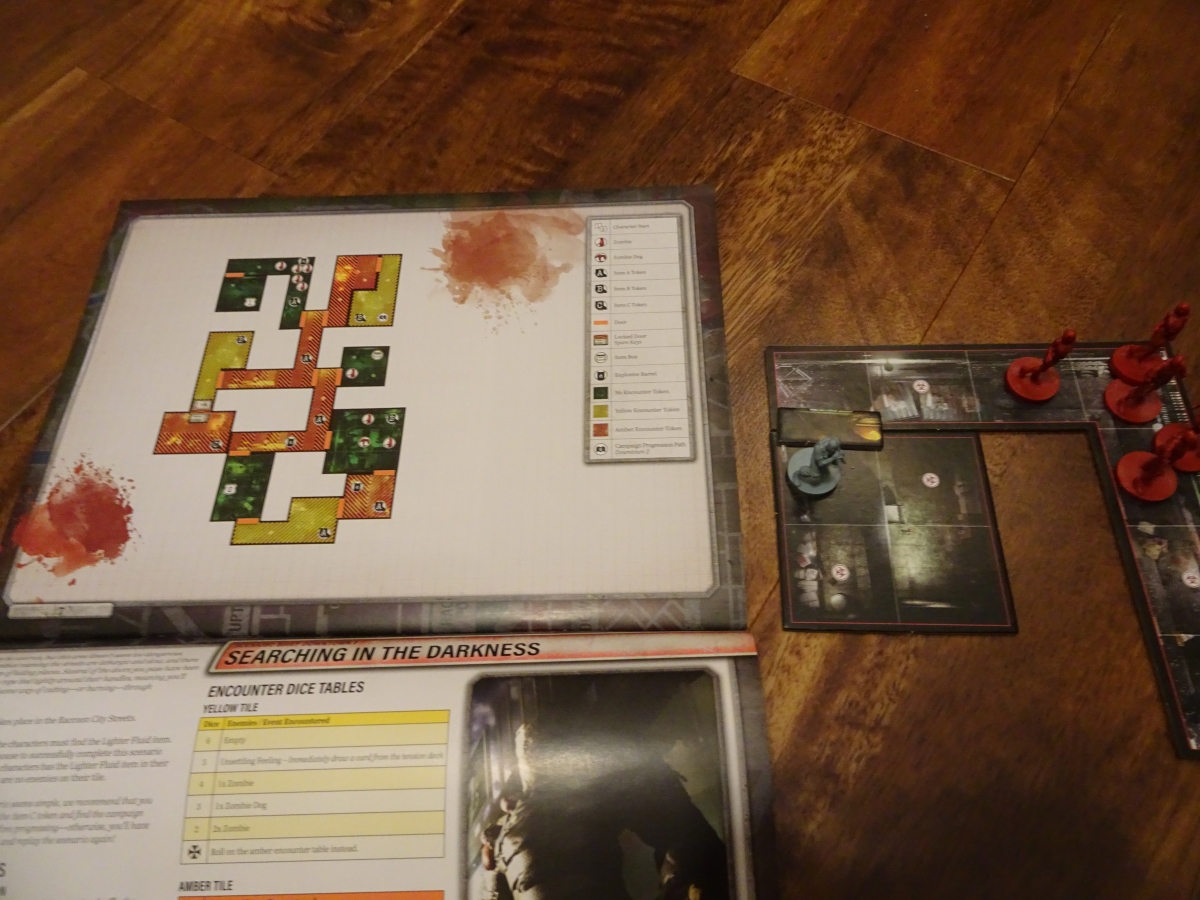 The components are the weakest part of the package, and feel far cheaper than the price-point of the game would suggest. First, the tiles and pieces are largely washed in dark far too much which removes any detail that would make them interesting to look at, and second they fail simply from a gameplay point of view of easily or accurately representing the game-state to the player. Even the models lack detail compared to pretty much every other game in the same price point. The doors are amongst the most egregious. Within the game it is very important to distinguish between a door that is ‘open’ or ‘closed’, but the actual tile is woefully unclear due to very slight differences that are nearly impossible to see from across the table. The tiles in general are so dark; the game would have been far better served simply being brighter, or having a bright big green door tile that merely said ‘OPEN’ compared to how bad these look. The cards were printed on a thinner stock that within the first play were already warping upwards from some sort of humidity issue.

Combat misses the mark in terms of the ‘survival’ aspect the original games possessed. In the original series, ammo was limited, but when players would utilize it, it essentially acted as a type of pressure-relief valve in the form of removing the enemies from the game. In this game, because a kill only happens on a single side of a dice, it is very; very likely sizable portions of a weapon magazine can be unloaded and not even kill a basic zombie. While normally a fan of dice and luck games, the base level of 1/6 to get a kill on a single zombie amidst the hordes that will be fought feels far too lucky and ‘swingy’. The mechanism comes off as obnoxious as even killing that single zombie in front of you feels unnaturally monumental. Even with better weapons, it makes even the simple zombies unnaturally resilient and is utterly unfaithful to the source games. 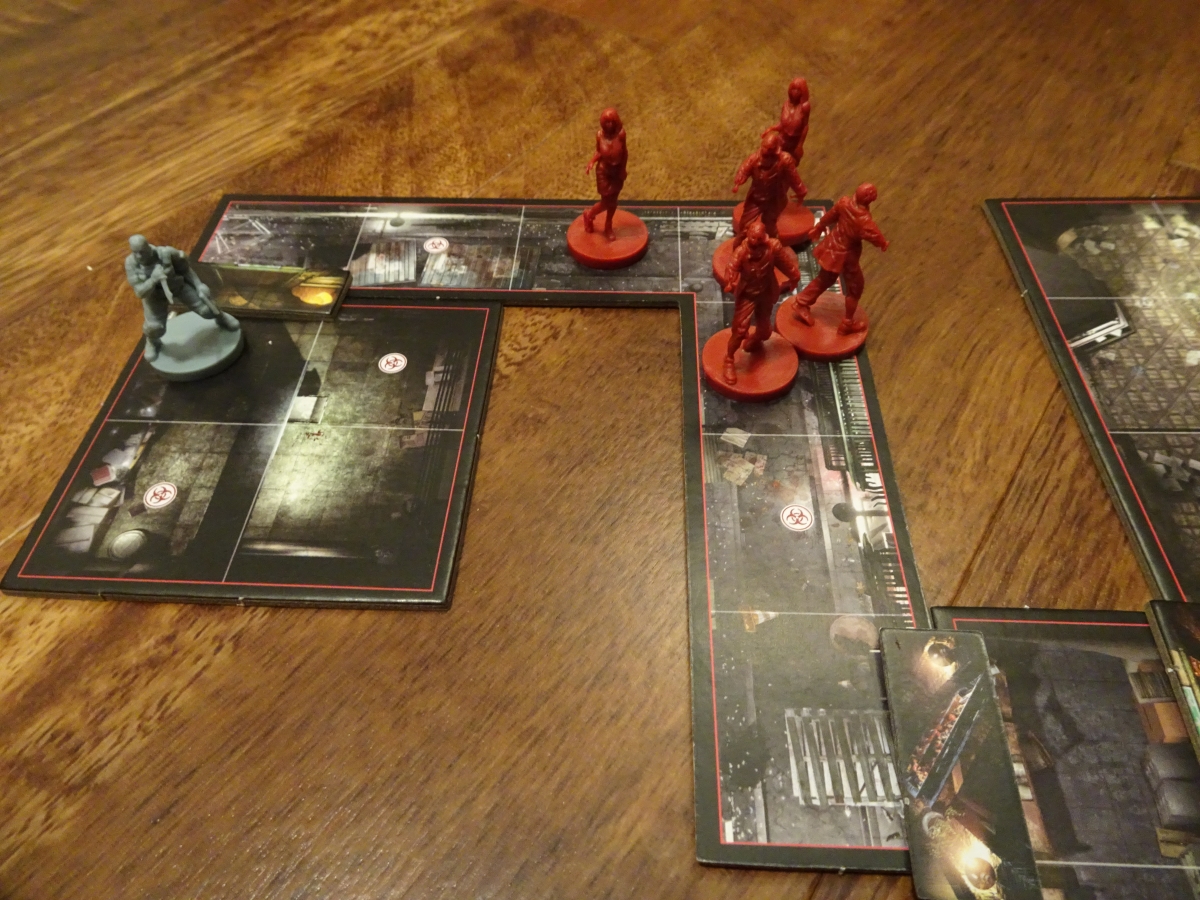 Unfortunately, it leads to an optimal (if very gamey) solution of just running around them and manipulating the AI. This is somewhat of a turnoff being a fan of the series. Of course the video games were never an outright ‘kill em all’ type experience, but to pretend players didn’t leave a sizable body count behind them is disingenuous. So, as a player, when presented with the very typical setting of opening a door, seeing a zombie, running past them and closing the door, it just feels like something core from the experience is missing.

One of the better parts is how they captured the random feeling of not knowing what will be faced, unlike say in Gloomhaven where the whole scenario is wide open in front of you. This is accomplished through using a dice roll to determine enemy placement upon revealing a room, as well as random items being scavenged through the rooms the player will travel through. Setting up a single mission is rough, as there are a lot of different decks to sort through, as well as prepare, as this simulates the various items and events that will be revealed in the playthrough. So at any given time the player will not know what item they may actually find in a room, what event might pop up, or what enemies will appear. Many times, there was a good tension of deciding whether to go into a room and chance finding something good, or just moving on and saving the ammo.

The rulebook, for its massive size, is a bit of a disaster. Fundamentally the rules are not that complicated, but they are so badly explained, mixed with an over-reliance on likewise badly explained symbols, it took a couple of playthroughs to realize certain things like creature attacks are controlled by a tiny symbol that is literally less than a quarter of an inch big on a card. Far too often some little thing would pop up and it would be too hard to try to find the single sentence or exception in the massive rule book that explained it, so there would be a lot of on the fly house ruling, which is never a good thing from a game design.

It is little things like this which pull away from the overall experience. It is sad, because the good parts of the game are actually really good. The feeling of saving a little bit of gear and items as players move from level to level so accurately captures the item management of the original games. Trying to fight through the city, torn between wanting more ammo and being forced to shoot it all up provided good tension throughout the experience. 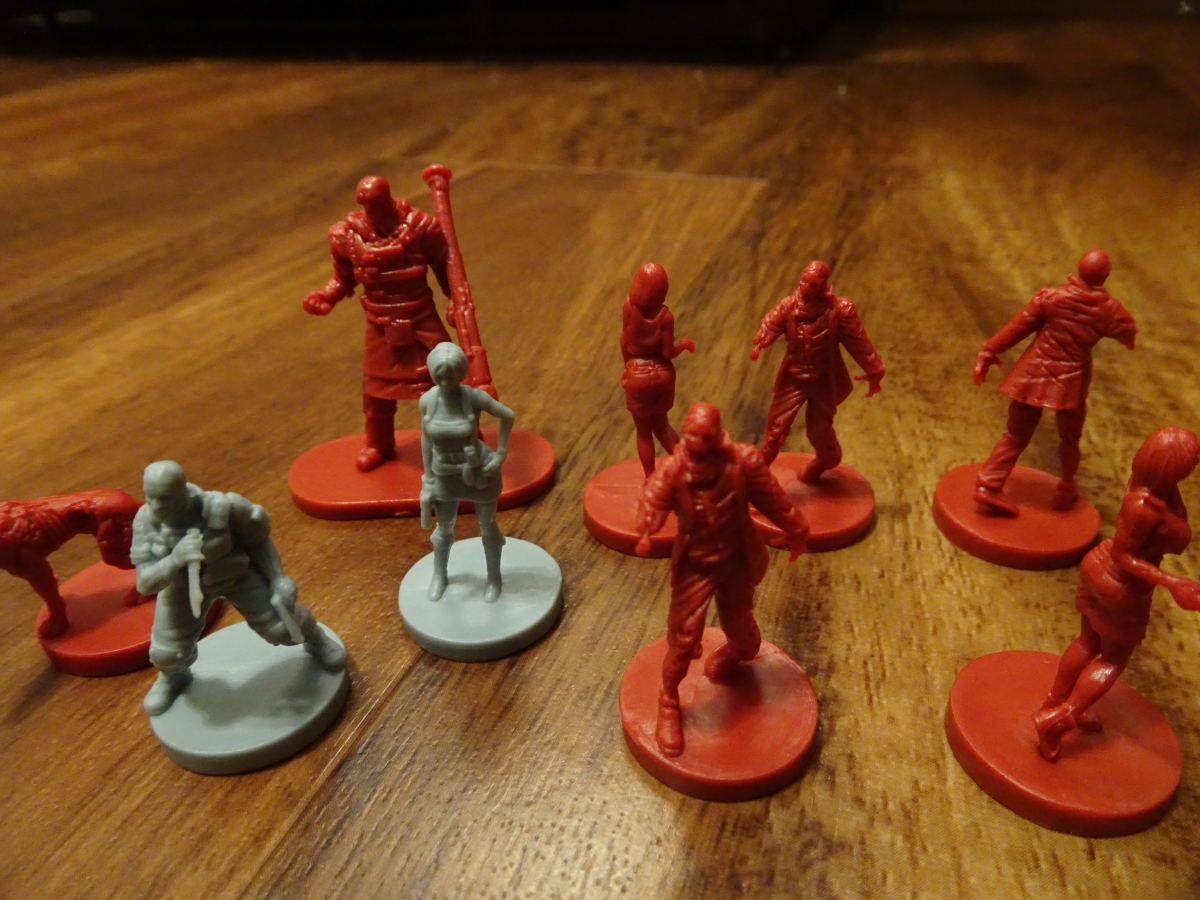 Ultimately though, the whole ‘most enemies only take 1 hit, you just have to actually hit them!’ is far more frustrating than might at first blush seem. Instead of being faced with ‘can I sacrifice a few bullets to kill this guy’ (like the games always were) it’s more like ‘can I get lucky and not have to blow my whole magazine on this guy?’ which is not like the games, and is a quick way to enrage even stoic gamers. Mag dumping a single zombie, or playing a mix of Twister and the Rumba with the enemies in the room does not feel like classic ‘RE’ in the slightest. In the end, there is a feeling of sadness, because as a huge fan of the series, seeing such flaws drag down what otherwise would be a great game is painful to see. Make no mistake, the game is fun, but once you start to see behind the curtain (and it’s wide open in this case) it’s hard to un-see and enjoy the game for what the developers meant it to be.

Cheap components, brutal set up, and bloated rules all conspire to bring down what is actually a pretty fun game. While the combat is painful in both how luck-based and ‘bullet-spongy’ the enemies are, the overall feeling of the campaign actually captured a pretty good sense of the original game. While there are some obvious flaws, overall fans of the source material (and dungeon crawlers in general) will have a good time here if they can look past the very clear flaws.