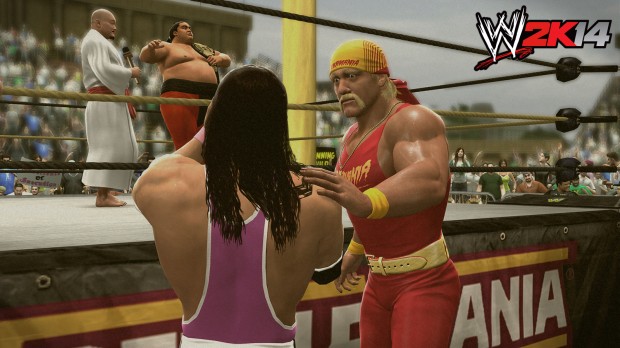 A little over two years ago, the WWE video game franchise — now published by 2K (formerly from THQ) and developed by Yukes — seemed to be caught in a funk. For a consistent number of years, WWE Smackdown vs. Raw (inevitably just called “WWE”) releases were mediocre in every way possible, improving very little on the product they had created. That all changed with last year’s release, WWE ’13, as Yukes created a fantastic mode entitled “Attitude Era.” If you’re familiar with wrestling, you know the Attitude Era as the time when Stone Cold, The Rock, Edge, DX and many others were consistently running wild on Raw and simultaneously making it one of the most exciting shows on television. The mode evoked those memories effortlessly and was a wonderful experience for all wrestling fans. This go around, Yukes has replaced Attitude Era with a new mode, this time called “30 Years of WrestleMania.” The question is, could they manage to capture lightning in a bottle twice?

When a franchise is annualized, you have to look beyond flashy new modes and directly at the heart of the experience: the in-game action. Unfortunately, Yukes did very little to spice up the actual in-ring action this year. The more realistic feel that the past few games have possessed (including a removed HUD, WWE trademark on-screen, etc.) continues in full force. But as with the positives come the negatives, such as occasionally awkward controls that leave you struggling to navigate around the ring.

It’s been a consistent complaint over the years: you can have all the fun modes you want, but if actually playing the game is not that much fun, there’s a problem. Since those complaints began to arise, the developers had taken steps to make the action at least serviceable, which they achieved last year. But unfortunately, this year it seems they took a break in that aspect. Sure, it’s far from unplayable, but it’s clear that Yukes is only halfway up the gameplay ladder; they still have many steps laying ahead of them.

It’s also clear by the lack of innovation in the main part of the game that most of the focus during the development of WWE 2K14 was on their brand new mode, “30 Years of WrestleMania.” If you are unaware, the upcoming WrestleMania will be the 30th anniversary of the star-studded event, so to celebrate that achievement this mode brings together some of the most iconic matches in WWE history. There’s no doubt that the older days of wrestling are far superior to the new-age, John Cena-dominated Raw, which is just one of the many reasons why 30 Years of WrestleMania succeeds.

You begin at WrestleMania I with Andre the Giant vs. Big John Studd in their famed $15,000 Body Slam Challenge. It’s not the most popular match but it establishes what the mode will be about very well. It’s very similar to WWE ‘13’s Attitude Era mode in a sense that you have goals you need to complete throughout each match if you want to break open the plethora of unlockables within WWE 2K14. These goals are always based around events that took place within the actual match. For instance, in the Body Slam Challenge, you have to beat Big John with a Body Slam. Things do get much more intricate later on such as in the Edge/Mick Foley match that features both superstars landing on a burning table.

One issue with the mode is that they rely too heavily on the larger stars of the era. Sure, the mode is based around playing the biggest matches at the biggest events, but being forced to perform as Hulk Hogan over six times is almost as tiring as watching his generic character on television. The same goes for John Cena, the star of today. This disconnect can occasionally lead to some emotionless matches that you are simply plodding through to get to the next section. Though I may be a bit biased, a bit more Edge and Ric Flair, less Cena and Hogan, would have been nice.

That being said, for every one match you plod through, there’s about five that evoke every nostalgic thought in your mind. There were multiple times where I would see a storyline brought up and immediately remember, “Oh, that promo he cut was so incredible….” Which then led me to a YouTube adventure of finding old wrestling clips and matches. The nostalgic happiness that WWE 2K14 evokes from the 30 Years of WrestleMania mode is unparalleled in any other kind of entertainment, including the television shows themselves.

The features pushed forward in years past such as Create a Story, WWE Universe, etc. still all exist and work decently enough. But it’s clear that there is still some untapped potential in both of these modes. Create a Story revolves around forming your own storyline, writing your own promos, and assigning superstars to backstage and in-ring sequences. It’s gone a few years without being majorly overhauled and although 30 Years of WrestleMania is nice, it would be nice to see a bit more life added to the Create a Story mode.

WWE Universe is your standard “GM mode,” a bit less in-depth than the Create a Story feature. You have a match card, a year schedule, and a list of champions. You can then assign matches for Raw, Smackdown, pay-per-view events, whatever suits your fancy, and choose to either simulate for results or play the matches yourself. I will regretfully admit that around four years ago, I gave up over fifty hours of my life to this framework when it was called GM mode. That appeal is wearing off as time goes on, meaning a face-lift may be necessary for this as well.

It’s clear that WWE 2K14 still possesses some of the issues the series has been plagued with thus far. But the recent implementation of modes like Attitude Era (WWE ’13) and, of course, 30 Years of WrestleMania in this year’s installment, make those issues almost entirely forgivable. There’s no better way to put it: Yukes did an amazing job of recreating some of the most memorable parts of WWE history. The 30 Years of WrestleMania mode is, simply put, incredible, and makes WWE 2K14 a must-buy for any wrestling nerd like myself, or even anyone that enjoys watching these heels and baby-faces step in the four-cornered ring each week.

WWE 2K14 still features some unfortunate issues, but those can be easily ignored as the 30 Years of WrestleMania mode soars past every possible expectation you may have. Yukes does an immaculate job of recreating the best years of wrestling and littering in a few hidden Easter eggs that wrestling nerds, like myself, will squeak in glee over. It’s clear the publisher turnover did not hurt the development whatsoever as WWE 2K14 is one annualized franchise that does not disappoint.