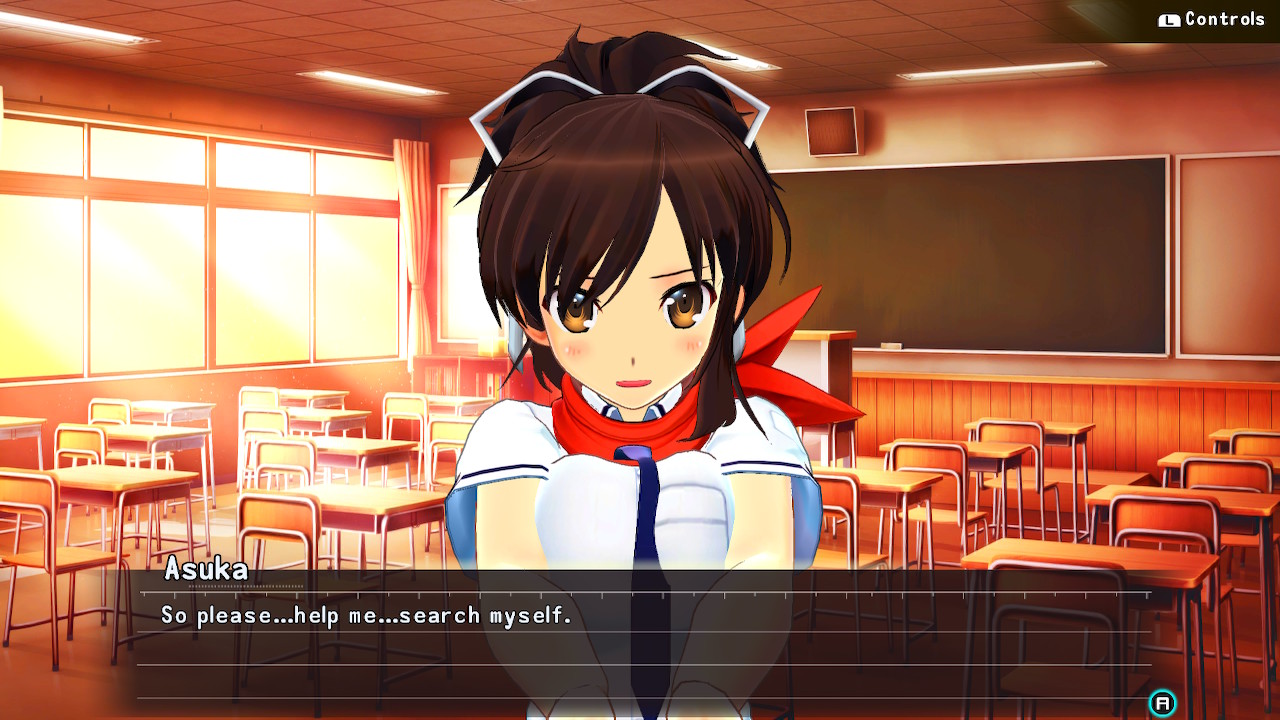 Spin-off games provide opportunities to experience your favorite characters in genres outside of their norm. These can be party games like the Mario Party series, musical games like Donkey Konga, or really any other type of game. Spin-off titles provide nearly boundless flexibility. The Senran Kagura series was initially a side-scroller about female ninjas fighting, but since has branched out into a card battling game, a rhythm cooking game, and even a third-person water gun shooter. This time, the series enters the Ecchi dating sim market with their newest addition, Senran Kagura Reflexions.

Senran Kagura Reflexions focuses on the player being called into the classroom by Asuka in order to help her ease her stress and talk. This is done in three basic steps: Hand reflexology, body reflexology, and glorious reflexology. After Asuka talks a bit about how she’s feeling, she’ll hold her hands out, starting the hand reflexology section. Two cursors show up on-screen, representing the player’s left and right hands. Hovering a cursor over one of Asuka’s palms or fingers and pressing ZL or ZR causes the corresponding hand to start massaging the specified spot. If she’s enjoying it, she’ll say something positive, and it will trigger a dream sequence after a short time. If you have HD rumble turned on, the Joy-Cons will vibrate as well. If she’s not into it, she’ll say that, and the game won’t continue.

The dream sequence transports you both to one of several situations, including Asuka as your tutor, her as a pop idol you’re managing, or her as your sister, just to name a few. The dialogue boils down to her talking about the situation and how you have to massage her because of it; this is the body reflexology section. Asuka stands there as you use the two on-screen hands to touch, caress, and squeeze various parts of her body. She’ll react positively or negatively depending on what you do and where you touch. To be frank, this part of the game feels incredibly pervy. The player can be dirty and touch her breasts or butt, or they can be more respectful and caress her shoulders or back. That doesn’t really make it feel any better, but it’s less dirty at least. After enough touching, the screen is filled with one of five colors, and the glorious reflexology prompt appears.

Glorious reflexology is essentially the climax of each dream sequence, pun unfortunately intended. This section involves a special massage where you must fill a heart meter up to a certain point within a minute. There’s also a satisfaction meter that you’re trying to keep the needle in the middle of. Massaging too hard and fast or too soft and slow reduces how much the meter fills up. You need to find a perfect balance and rhythm in order to fill that meter efficiently. Fortunately it’s pretty easy to do that; in fact, it’s incredibly easy once you understand what to do. After filling up the meter, you hit the A button, and Asuka flops over in ecstasy. There’s no hiding what this is implying, especially when using the roller. When it ends, the final roll slides up her leg and she flops onto her side. So…use your imagination. Altogether, you have a thigh massage with your hands, back of the leg massage with a roller, arm rubbing with a brush, and vibrating massager on her stomach. Yes, some of those are odd, and no, I don’t know why they’re there.

Each dream sequence fills up more of Asuka’s emotional vessel, changing its color depending on what color the screen was at the end of that body reflexology section. The colors are affected by where Asuka is touched, and are reflected by different rings appearing immediately after each touch. The colors don’t seem important at first, until you realize that they play into reaching the end of the game. Each “playthrough” follows five cycles of the aforementioned gameplay before it ends. Each color has a different heart piece that it unlocks, which completes Asuka’s heart, leading to the end of the game. This took me some time to figure out, and once discovered, it allowed me to power through the game.

Powering through the game didn’t even feel like a waste either. The gameplay got repetitive extremely quickly, leading me to find a spot corresponding to the color I was working on, and building up the colorful mood as fast as possible. The ability to skip the glorious reflexology was tempting as well, as it allowed me to speed through the “story” even faster. I place story in quotes because there isn’t much of a story here. It boils down to you trying to help Asuka “find herself” as she puts it. That’s sprinkled in the middle of the gameplay sections, and at the end of each playthrough. The playthroughs don’t take long either unless you decide to take your time with it. The lackluster and quite honestly, pervy gameplay, didn’t make me want to take my time. The game’s description made it sound like there might be actual conversation, choices, and getting to know Asuka, but all I got was touching, squeezing, and massaging. A wash, rinse, and repeat game that gets old pretty fast.

There is one aspect of the game that adds more gameplay value, albeit it only a little: you can use motion controls. In body reflexology, swinging the Joy-Cons causes you to touch, while twisting them inwards makes you squeeze. For glorious reflexology, the exact controls vary; for example, the thigh massage requires you to move up and down like you’re playing a drum, while the roller has you tilt the Joy-Con back and forth. With the lack of actual gameplay in Senran Kagura Reflexions, the motion control option added a reason to keep playing. At the same time, it isn’t nearly enough to warrant any replay value.

Senran Kagura Reflexions costs $9.99, which feels like it’s on the higher end of what I believe this is worth. The graphics are nice, the sounds are clean, and there aren’t any glitches or problems, but there isn’t much to actually play here. There are visual novel games that have little to no gameplay, but those are more about story than anything. This game doesn’t even have story to make up for the boring gameplay. Senran Kagura Reflexions isn’t a bad game per se, it just gets repetitive and ends up being lackluster. If you’re a fan of the Senran Kagura series and want something different to test out, then you may be tempted to give this a try, but if not, then you’re probably better off saving your $10.

Senran Kagura Reflexions is an Ecchi dating sim game that in reality is a touching and squeezing simulator. The gameplay feels pervy at times, and gets repetitive and boring fairly quickly. There are no visual issues, and motion controls make things more interesting, but it unfortunately isn't enough to make it entertaining.

Codi loves to play video games and watch movies. He will watch almost any kind of movie just to experience them. His ideas take inspiration from the shows and movies he watches, and games he plays. He also loves a good pun.
Related Articles: Senran Kagura Reflexions
Share
Tweet
Share
Submit