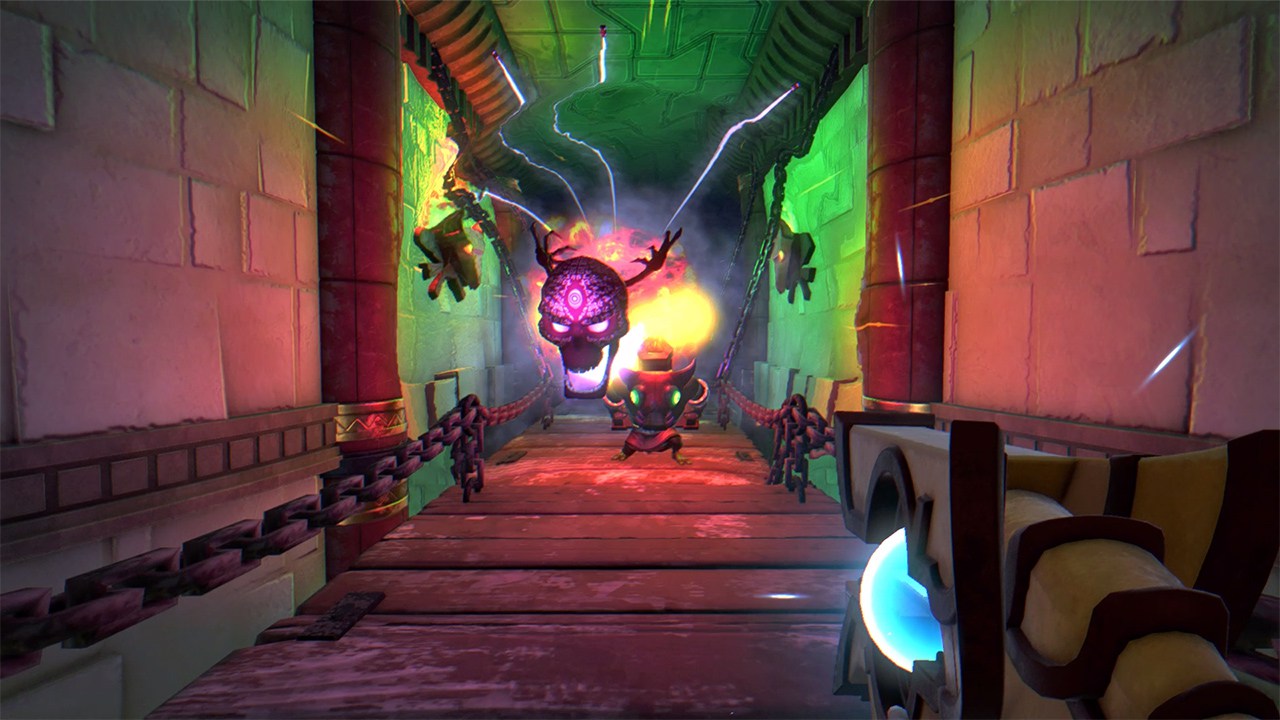 Sometimes, the title of a game is very indicative of what you’ll get to play; Immortal Redneck is a fast-paced rogue-lite FPS where you take control of an undead redneck with a deadly shotgun. The game starts out by explaining how this redneck found his way into the desert. It all started with the redneck taking a vacation to the desert, but meets an unexpected fate when he crashes his dune buggy and dies. He awakes being mummified and brought back to life, ready to explore temples and fight the big bosses inside. Immortal Redneck, being a rogue-lite, has many features that make this genre fun including randomized temples, a skill tree, and replayability.

At first I wasn’t sure what to think of this game. The title caught my eye and intrigued me to explore what it had to offer. Immortal Redneck is a port from PC that has made its way onto various consoles including the Switch. I noticed that one of the new mechanics added to the game in the Switch version was motion controls. In general I am not a fan of motion controls, but decided to try them anyway. The motion controls worked well and moved how I wanted them to move, allowing you to take control of the camera,  but the speed of the game made it a little difficult for me to focus when trying to move my console or controller and evade enemies at the same time. Upon turning off motion controls I was given a more enjoyable experience.

Immortal Redneck contains three big temples for you to explore and conquer. Each temple having its own collection of enemy monsters, challenge rooms, and bosses on the third and seventh floor. The main focus of this game is to head into a temple, fight your way through the floors, and acquire gold to upgrade your skill tree after you die. I spent the first couple of runs getting used to the controls and the monsters you face in each room. As you defeat monsters, they will sometimes drop gold, which you can use to update your skill tree to give you an edge for your next play through the temple. The more I played, the more gold I received, and the more I could make my character stronger for the next run. One thing I noticed is that Immortal Redneck never makes you feel like you can’t win. I spent many hours replaying the first three floors of the first temple, and after awhile I was able to understand how each enemy works and moves, allowing me to take down most of the monsters with ease. Even when fighting the boss monsters, once you figure out their patterns and how to damage them, they become quite easy to defeat.

As your skill tree grows, you unlock various “God Deities.” These gods grant you a new skill and a different weapon loadout upon choosing them. You can only choose the god you want to use after you have died, and you stay this god until you die again. Some gods had better weapon loadouts for my play style then others, but I really liked how each weapon set felt different depending on each god you choose. Along with a new weapon set, each god has a unique skill/ability. These abilities work as slight power ups. Some abilities allow your guns to shoot faster, become invincible for a short time, or even place an object to distract enemies from your character. These varied abilities were a great idea, though I found myself not using them. The abilities to me didn’t really make that much difference or help me in tough spots. I felt like I had to rely more on my knowledge of enemies and navigation of the area I was in.

This game, by no means, is an easy or short game to get through. After playing for hours I was still struggling to beat the first temple. Sometimes getting to the third floor of the temple would take me upwards of an hour, just to die right before I reached the boss, then I would have to start all over from the beginning with not much to show for my spent time. This became frustrating, but it wasn’t because of the grind of the game; Immortal Redneck has this scroll system that can change the outcome of your run drastically. The game started to feel like a more of a grind then it was worth. I got so excited when I beat the first boss, but was then upset when all I received was gold, ammo, and a small power up. I felt like the reward for completing a boss or temple was so minute that all my effort was for nothing special or exciting.

The scrolls are random power ups or power downs that occasionally pop up when you kill an enemy or find a treasure chest, and there is no limit to how many scrolls you can carry at a time. The power ups are great, giving you the chance for more gold, being able to find more health, and increasing your speed. There were times that a scroll powered me up to the point where clearing the first three floors of a temple were a breeze and taking on the next floors would be just as easy, up until I picked up a new scroll that took that all away. This is where the game drops the ball. The power downs can stop you in your tracks and change the game in an instant. Some of the power downs include losing one bullet every time you miss a shot, slowing your movement speed, halving your HP, or changing your entire weapon load out. The game gives you the option to decide whether or not you want to pick up the scrolls. If you don’t want a scroll you can just walk past it; but once you pick the scroll up its effects become applied to your character. Also if you plan on advancing through the temple, you have to take your chances and pick up scrolls, otherwise you will be at a disadvantage for the rest of your run.

Immortal Redneck is a fast paced FPS that has a lot of enjoyable aspects and replay value. With over 50 weapons to choose from, there is no lack of fun and exciting firepower at your disposal. The biggest problem I had with the game was the scroll system, repetitive temples, and what felt like an unrewarding grind. Overall, Immortal Redneck is well worth playing.

From Southern New Jersey, Shaun has always been a huge fan of video games as well as nerd, geek, and pop culture. No matter the topic of conversation, Shaun can always find a way to slip in a movie or TV quote to get a laugh. When he is not playing games or watching shows, Shaun works as a substitute teacher during the day and as a bartender at a local brewery on nights and weekends.
Related Articles: Immortal Redneck, Indies
Share
Tweet
Share
Submit