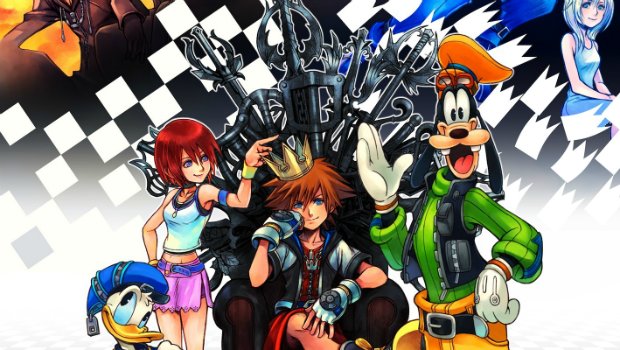 The original Kingdom Hearts is a true classic in video gaming. It is the emotional story of three heroes crossing universal routes to reveal the nefarious plots of once-sealed worlds, all delivered with creative gameplay and perfectly written storytelling. The hybrid of Disney and Square Enix characters and worlds, Kingdom Hearts is an oddity. The sea of confusingly timed sequels, prequels, and alternate universe titles in the franchise have only added to it’s odd nature. After sending us through a mind-warp with each subsequent Kingdom Hearts title, Square Enix now takes us back to the beginning with their repackaging effort Kingdom Hearts 1.5 HD ReMIX.

[singlepic id=16378 w=320 h=240 float=left]Many gamers have played at least one iteration of a Kingdom Hearts title. For those who may have never had the opportunity, the Kingdom Hearts universe opens with the main protagonist, Sora, who goes through an existential and prophetic dream that cryptically reveals his fate to him. After a disturbance on their island begins to devour the world itself, Sora is whisked away to a far-away town, where he meets Final Fantasy heroes Squall Leonheart and Yuffie, who reveal to him his destiny of wielding the Keyblade. Meanwhile, Disney stalwarts Donald (a court mage) and Goofy (a royal knight) are in search of the keyblade’s master. They find their man, Sora, and band together as a team. Thus begins an adventure to find lost loved ones and foil the plans of evil hearts.

[singlepic id=16379 w=320 h=240 float=right]Kingdom Hearts 1.5 consists of three bundled titles. Kingdom Hearts: Final Mix, which was previously only available in Japan, is the original game with added bosses, items, enemies, and weapons. Also available is an updated version of Kingdom Hearts – Re: Chain of Memories, which in and of itself is a remake of a Gameboy Advance title of the same name, save the reply notation. Lastly, the cutscenes and cinematics from Nintendo DS title Kingdom Hearts: 358/2 Days have been included, though the game itself is not playable. All three inclusions have been redone with a very impressive HD treatment.

[singlepic id=16380 w=320 h=240 float=left]The first, Kingdom Hearts: Final Mix, is a long overdue release here in the United States that many diehard fans have desired. Only available in Japan until now, the Final Mix contains many new features that completists salivate over. In addition to the original game, the Final Mix provides gamers with new keyblades, 10 new abilities, 13 new accessories, all-new enemies, and alternate bosses. In addition, new cutscenes and Ansem’s Reports reveal more of the story than the original. Having that crucial information would have been great in 2002, but now it is not as special. While the changes aren’t overpowering and don’t alter the main story in any way, having been held away from the Final Mix’s added features for more than a decade makes having them finally available that much sweeter. The high definition treatment on the game is marked, especially if one has the privilege of comparing it directly to it’s PlayStation 2 counterpart. Everything looks crisper. On the flip side, many of the old textures mainly associated with facial structures overlap awkwardly, creating this strange effect where certain parts of the face are HD, and others are not. The game plays the same as the original did.

[singlepic id=16381 w=320 h=240 float=right]The second playable game in the package is Kingdom Hearts – Re: Chain of Memories. Originally a Gameboy Advance title, the game was remade and released on the PlayStation 2 console. In Kingdom Hearts 1.5, the game has redone in high definition but is largely the same as the PlayStation 2 release. Re: Chain of Memories’ gameplay is based on a interesting card battling system combined with the action RPG elements from the original. Rather than battling enemies directly on the map, battles are staged in alternate screens reminiscent of turn-based RPGs. In these battles, Sora uses cards to attack with his weapon, but also to use spells, summon allies, and heal himself. A gauge must be refilled every time you exhaust your card deck. This game isn’t as fun or as well executed as the original game was, and still doesn’t stand up real well against it. That said, it is still a very fun game.

[singlepic id=16382 w=320 h=240 float=left]Lastly, the Nintendo DS title Kingdom Hearts: 358/2 Days’ collection of cutscenes have been remasted in HD and are presented in a theatre, allowing for a understanding of the story without actually playing the game. There isn’t much to say here, as the cutscenes are really nicely remade, but who really cares when you don’t actually get to play the game they are associated with. This is a really cheap throw-in that will only tantalize the most hardcore of fans.

All in, you’ve got a nice product with two fun games, one of which is arguably an all-time classic. What you also have is a repackaging effort that provides no new content (the latest any of this content was made was 2009), one that mercifully comes at a $40 price tag. For long time fans of the series, this is a great opportunity to relive the Kingdom Hearts experience. Those of you who may have skipped over the games are provided with a chance to get in on the fun. Unlike many other repackaging efforts, Kingdom Hearts 1.5 HD ReMIX does just enough positively, while leaning on its own greatness to create a worthwhile addition to one’s video game collection.