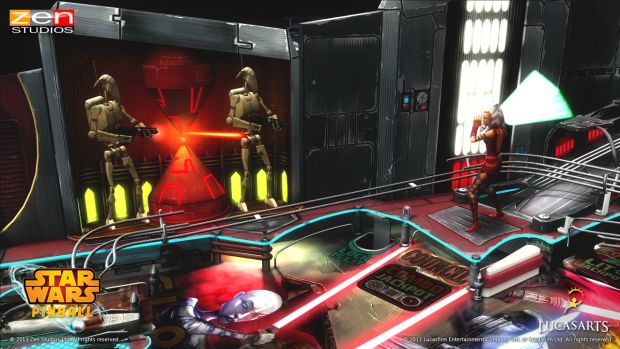 Zen Studios is clearly a developer who loves their pinball. A few years back, they released Pinball FX on both XBLA and PSN and while it didn’t light the world on fire, FX received decent fanfare and Zen was praised for injecting life into what seemed like a dying breed of game. After Pinball FX’s success, Zen decided to branch out from their Microsoft and Sony partners and create a Wii U exclusive pinball title. And what better way to start a new series than a partnership with Lucas Arts and the Star Wars franchise?

[singlepic id=14537 w=320 h=240 float=left]When you begin Star Wars Pinball FX, you’re quickly met with your first decision: Sith or Jedi? This is a question that any Star Wars fan has pondered for years, and you finally have to decide — for the sake of pinball! Once you make your decision, every point you earn while actually playing pinball will go to leveling up your rank such as going from Jedi Initiate to Jedi Padawan. While choosing sides is a decent addition, it becomes rather meaningless in the grand scheme of things.

As is with every Wii U title, it’s always intriguing to see how the developer works the tablet into the gameplay. Zen Studios does a fairly respectable job by allowing the tablet screen to show off some of the visual actions you activate on the table, such as two characters beginning to fight at the top of the cabinet. It also serves as a reminder for your current high score and just how close you are to topping yourself. The issue with these enticing features is that while they’re nice, they’re also quite the distraction. There were many times where I lost a ball simply because I was curious as to what was happening on the screen in my hand.

Thankfully, Star Wars Pinball is one of the games that you can play using only the tablet. It’s always a nice touch when a developer utilizes the tablet in that way and it’s even better when the game loses no visual beauty in transition, which Star Wars does not. Possibly the only issue in playing the game on the tablet is the eye strain caused by having to focus on all the moving parts on your pinball table. Though it may be due to me being prone to migraines, I experienced multiple instances where a headache would arise while playing with just the tablet. It’s great that it’s an option, however.

The thing that this sort of game lives and dies by is obvious: the tables. Star Wars Pinball comes with three different tables at launch: Star Wars Episode V, Star Wars: The Clone Wars, and a Boba Fett variation. The three choices are all understandable selections, but It leaves you wondering: why only three? For a game that costs $10, getting only three tables will be looked at by many as a bad proposition. While it isn’t necessarily a rip off, it’s incredibly disappointing that only three tables were included in this package. Obviously, Zen will sell the rest of the tables as DLC, but that doesn’t rectify the icky feeling you get from knowing you’re also being sold the right to download more tables.

The tables themselves are, simply put, quite impressive. The Boba Fett table is a visual splendor reminiscent to his history in the saga. The animations[singlepic id=14536 w=320 h=240 float=right] on watching Boba fly around as you hit certain ramps on the table are superb. It obviously isn’t only the animation as the table features many unique sequences such as accepting contracts from the Galactic Empire and the Hutts. Similar experiences happen on the Star Wars Episode V table as you choose from multiple scenes found within the movie and interact with them by shooting the ball into highlighted outlets. These special events go a long way in keeping the tables fresh and unique every time you play them. It adds life even after you feel like you’re tired of simply playing “pinball.”

Unfortunately, the three tables do have a weak link and that comes in the form of the “Clone Wars” table. Now, I’ll preface this by saying I’ve never watched the Clone Wars TV show or movie so it may be a problem birthed out of my lack of attachment to the series. But that being said, the Clone Wars table just felt dry at times, lacking the personality the other two tables held so high. It has its own unique sequences, most definitely, but none of them are particularly fun to dabble around with. It feels as if Clone Wars was the afterthought in the development of Star Wars Pinball and the other two tables were the clear focuses. Don’t get me wrong, at the end of the day, the Clone Wars table plays just fine. But in a game with such a simple genre, you have to give something extra. Boba Fett and Episode V have that something extra, Clone Wars does not.

Technically, you won’t find a tighter pinball experience than Star Wars Pinball and the other Zen products. The feel of pinball is incredibly tough to duplicate in a video game — that’s been proven many times before. Despite that, Zen captured that feel with excellent precision. A major part of their execution came in the form of sound effects. It’s a simple thing, yes. But in pinball, sound effects play a major part and if you don’t get them right, your pinball game is doomed to irrelevance. Thankfully, that is something Zen didn’t have to worry about as the many sounds in Star Wars Pinball all explode out of your TV screen one right after another. Rather it’s the clanging of the flippers or simply the sweet sound of you racking up points, Star Wars Pinball knows how to feel like candy to your ears.

[singlepic id=14538 w=320 h=240 float=left]Star Wars Pinball has a few multiplayer modes for you crazy folks out there that enjoy playing games with your friends. The first option is a simple split-screen mode that incorporates both the Wii U tablet and the Nintendo Pro Controller. The other mode relies on a simple hand off system that focuses on you giving the tablet to the other player whenever you lose a ball. The two players are then in a race to see who has the most points at the end of the game. It’s nothing extraordinary but it’s some nice finishing touches on a solid video game.

Coming into Star Wars Pinball, I expected very little. I knew of Zen’s previous franchises and knew they were highly regarded but I’ve never been a pinball lover. Zen quickly changed that once I began to dig through the multiple scenes on the Episode V table. The Boba Fett table only further lamented my enjoyment of the title. The main issue comes in the form of paying $10 for two great tables, one acceptable one, and the chance to purchase future (possibly better) tables. Is that a deal many are willing to take? If you’re a fan of either pinball or Star Wars, you shouldn’t think twice before clicking download.