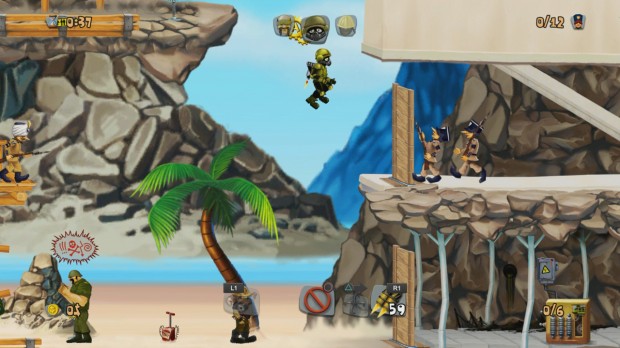 The days of the cutesy 2D action platformer are mostly behind us at this point. As Worms fever passed us by, and Rocket Riot delighted and satisfied our wondrous hearts, we’ve begun to realize that it may be time to move passed this trope. Bloober Games (side note: the best name for a video game developer ever?) refuses to embrace this realization as they have made yet another installation in their A-Men franchise. The franchise is one that takes the “cutesy” setting and builds puzzles around it, while also setting a goal for each level. It is an interesting take on 2D action, but it’s not the “interesting” that matters, it is all about the execution — something Bloober managed to miss entirely.

The aforementioned goals for each level typically boil down to “kill X amount of soldiers.” Once this is completed, a helicopter will then swoop in and take your ferocious heroes back to base. These heroes are categorized into classes such as an engineer, soldier, and brute. The variety in the classes is a welcome feature that attempts to keep the product from becoming too repetitive after each level passes. Unfortunately, the major issue with “each level isn’t the characters directly, but the gameplay that surrounds them.”

In any game where progress is based off of completing puzzles, it is usually a smart addition to add something that will help players if they become stuck.Unfortunately you won’t find that in A-Men 2, leading you to bang your head against…. these wide open puzzles that pop up across each section. Finding the desired solution is made even more difficult by the fact that each of your characters die in one melee hit from the enemy, forcing you to be overly cautious with each step. But this cautiousness can also directly feed into some overlooked parts of the surrounding environment that may help you in puzzles later on. It is a frustrating design that could have been easily rectified by adding a hint system like you’d find in most puzzle-based games….

Level design is also a bit of a hinderance in A-Men 2. In most cases, the larger the level, the more there is to explore and uncover. That is not the case in A-Men 2 however as the breadth of the levels simply leads to confusion. Despite the daunting nature of a huge level filled with unknown solutions, the size will result in you wondering aimlessly, or feeling like you may have simply missed a cue somewhere along the way. The lack of some kind of video or audio clue system rears its ugly head here as well. Sadly, exploring the weak level design with no direction is just not fun.

Bland may be a bit harsh because the levels achieve the cuteness factor they try so hard to achieve. Each class also has their own look which is nice, but nothing that makes you hop out of your seat. This “cuteness factor” is pushed even harder by the jubilant and upbeat music that serves as the soundtrack for A-Men 2. Although it can become a bit repetitive, it is possibly the best part of the game. The occasionally relaxing synths do a decent job at putting you to ease after becoming immensely frustrated with the game at large.

That frustration turns into painful sadness on more than a few occasions, thanks to the absolutely abysmal writing. It’s clear that the writers were trying to build further on the whimsical style A-Men has set up, but they fail oh so miserably. The dialogue never instigates a laugh with most of the humor falling completely flat. In fact, the characters themselves consistently remind you that they are just as bored as you are, spouting such lines as “I’d love to, but not really” and “Ready and bored” whenever you attempt to control them.

Bloober’s attempt to edge their own name into the 2D puzzle platformer market is an intriguing one from the outside looking in. The game boasts a concept that could be fun for a few hours, but very early on becomes nothing more than a boring puzzler rife with dead ends and one-hit deaths. It makes you ooze frustration after every section, and never really satisfies you the way a sweet puzzler should. A-Men 2 doesn’t deliver on the nostalgia we all remember from our favorite 2D puzzle platformers, coming up short in almost every way.

Bloober Games’ cutesy 2D platformer does more than disappoint and frustrate level after level. It boasts an interesting concept but ultimately struggles to capitalize upon it. The visuals are not to die over, nor to die for with the actual puzzle design being the root of all evil in A-Men 2. Lack of new-age help features and visuals cues leads you to banging your head against a wall. Which coincidentally, sounds more fun than playing A-Men 2.