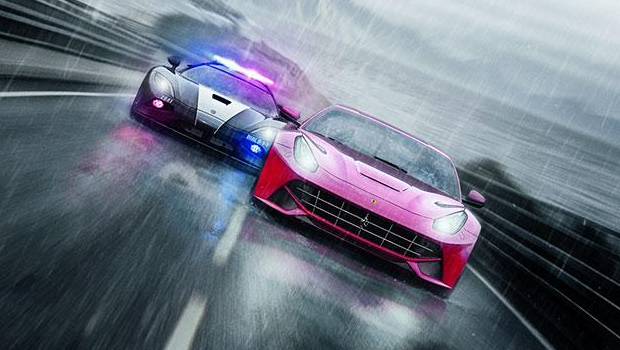 Need for Speed is a franchise with a long, storied history, and Rivals marks the 20th entry in the series.  The franchise has been a bit lacking in recent years, and I’ve been waiting for an entry that gives me that indescribable feeling I had the first time I drifted through Olympic City in Need for Speed Underground 2 back in 2003.  Developer Ghost Games strives to give the series a much needed shot in the arm with this most recent iteration.

The game takes place in the fictional Redwood County, where cops and racers have been battling it out, constantly one-upping the opposing faction into an insane rivalry.  As you progress through the game, the plot unfolds in between races as cutscenes that are enough to pull you through the game, but don’t expect to get too invested in any aspect of the story.

Players choose between cops or racers, and each faction has their own separate events and objectives.  Switching between either is a simple matter of heading back to a safehouse and choosing to swap factions.  Cops spend most of their time trying to bust racers, smashing them off the road or taking them down with their pursuit tech (the weapons used to gain an unsportsmanlike advantage against racers,) while racers usually try and outrun cops and get into high speed races.

One of my favorite mechanics in the game was the ability to overlap events.  A player can be flying away from the cops and challenge another racer in the middle of their own event.  Before you know it, you’ve got cops chasing both of you in a hot pursuit as you race to the finish line.  This creates some insanely high intensity moments that you’ll want to talk about for days after.

The cars all handle insanely well, and I never felt like I was ever hindered because of the controls.  Even at an entry level, I was able to satisfyingly drift and slide around turns within 30 minutes of play.  Supreme handling and simple controls enable players to start having fun from the moment they start up the game, instead of working around a bloated tutorial or fumbling with adjustments like in other racing games.  That said, while the intuitive handling lends itself well to beginning racers, racing game aficionados may be unimpressed with the game’s lack of specific customization.  You won’t be tweaking any suspension or picking out fuel injectors.

The core of Need for Speed Rivals lies in its seamless singleplayer to multiplayer AllDrive mechanic.  Players can drop-in and drop-out of a multiplayer match with up to six players almost seamlessly, maintaining their progress through the story as well as any unlocks they’ve gained.  You can challenge them to races or attempt to run them off the road, depending on your play style, in an attempt to steal their SpeedPoints.

AllDrive trickles into almost every aspect of Need for Speed Rivals.  You can see the high scores of other racers for events as well as checkpoints called speed cameras, which clock your speed at intersections and compare them to your friends.  These small bits add fun to driving across the 150+ square mile area boasted by Rivals.

The amount of freedom Ghost Games has given to players is immense.  Players can follow objectives, unlock cars, and progress through the game’s campaign, but that’s not necessary for a fun time.  There are never any voices chirping through your speakers saying, “Take the next jump!”  There isn’t even much punishment for failing a race; you just keep driving and you’re off to the next challenge.

That isn’t to say the challenges, called Speedlists for racers and Objectives for cops, aren’t worth doing.  You can unlock increasingly more powerful cars as well as gain Speedpoints, Rivals’ in-game currency.  Speedpoints are used to customize and upgrade vehicles as well as unlock and upgrade pursuit tech.

The way you earn Speedpoints highlights Rivals’ emphasis on risk versus reward.  As players earn more Speedpoints, a multiplier called “heat” rises, which increases the amount of Speedpoints you earn but attracts more AI controlled cops to your position.  If a racer gets busted or a cop’s car gets destroyed, then his or her points are lost.  This element made for some extremely tense issues.

Need for Speed Rivals is the most beautiful entry in the series to date.  The Frostbite 3 engine looks great, with particle and weather effects being absolutely premium.  Cars shimmer and are stunning, but when I was playing on PS4, I sometimes had to remind myself I was playing on a next-gen console.  The game is inarguably gorgeous, but I just didn’t feel that huge shocking leap that I’ve come to expect when I play a new generation of games.

Sound design is nothing short of amazing.  Cars rev and roar exactly as you’d expect, and playing the game on a headset is really something special.  There’s nothing quite like feeling the roar of a powerful car hit your eardrums.  The soundtrack also suits the game well, with different music sets for cops and racers.

Need for Speed Rivals is a great entry in the series and a huge improvement from Most Wanted and Hot Pursuit. AllDrive brings multiplayer to a new level, and the experience sets the bar for all racing games from now on. That said, since AllDrive is so important to the overall experience, multiplayer gamers will likely get a lot more out of it than those who play alone. But, if you're looking for a racing game that's rewarding, fun, and visually impressive, then Need for Speed Rivals is the game for you.