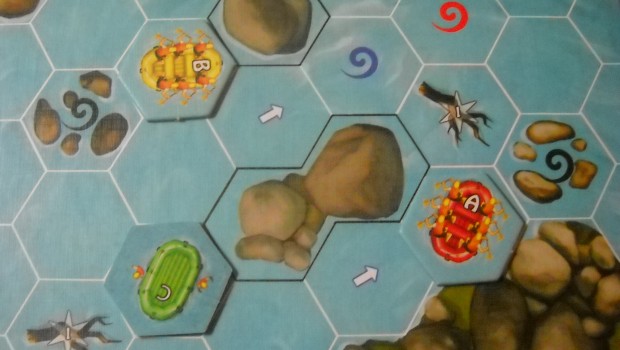 One of the more thrilling things you can do when you’re not playing board games is go whitewater rafting. Actually that last sentence is now false. You can enjoy the thrill of white water rafting while playing the board game Whitewater, designed by Frederic Moyersoen and published by Mayfair Games. Whitewater is not a simulation game, instead it is intended for families and more casual gamers, but as I have explained the rules to different people they’ve often exclaimed, “That’s just like really going whitewater rafting.” Played casually, and using the simpler and shorter base rules, this is an enjoyable game.

What’s in the Box:

The component quality is good but not exceptional. It would have been great if the boats were miniatures, but they are instead flat pieces of cardboard, making them a little hard to pick up and move. The rule book was well done, and I usually teach the game in the same order that the rulebook uses.

Rules
One thing that turns this game from good to great is that you share boats with some of the other players instead of each player having their own boat. At the beginning of the game boats are divided such that you share one boat with one other player and share a second boat with a different player. You also decide secretly which of your two boats you want to double the points for. The sharing of boats means that your boats move twice each round, once by you and once by your partner.

You get two paddlers in each of your boats, so a total of four paddlers that you control, and your paddlers serve as action cards; you exhaust them to use an action point. You also have three energy cards which you can exhaust for an action point. The difference is your paddlers recharge each round, but you need to spend a paddler’s action to recharge an energy card. This is a nice mechanic that lets you work overtime when you need to, but then you’ll need to take it easy later. One of the nasty things that can happen in the game is that one or more of your paddlers can get locked. Being locked represents losing your paddle or being overboard. A paddler who is locked does not recharge at the start of the round. Instead you must spend an action to unlock the paddler, though they remain exhausted that turn.

There are a number of things you can do with action points.

Boats can intentionally bump into each other which results in all of the boats moving in the direction they got bumped, often into bad spots on the river and the river has a number of interesting features in it. Some spots immediately push you in one direction, while others turn your boat around. Others require you to use two actions to move again. The nastiest things are the whirlpools. When you enter a whirlpool you must roll a die that matches that color of whirlpool. The blue die is the nicest and mostly just spins your boats. The black die is the worst and often locks all of the people in a boat (they are thrown overboard).
As boats move off of the last tile you place a marker on them to indicate who finished 1st, 2nd, and 3rd. Then the game ends (even if there are more than three boats in the game). 1st place gets three points, 2nd two points, and 3rd one point, which may be doubled for the boat you placed the double point marker on at the beginning of the game.

I have a couple more comments before getting to the pros and cons. I have not played the game with all of the possible numbers of players, but I expect that two-player game might have a very different feeling. Also, I expect that playing with five or six people might increase the feeling of down time substantially.

The game comes with advanced rules, which allow you to track lost paddles, lost people on the river. Unfortunately, the increased complexity does not match an increase in strategic depth. The additional rules do not open up more interesting decisions and make the game less friendly to casual and family gamers.

Why You Might Like Whitewater
This is a great family or casual game. The decisions are not that hard and often involve deciding between a risky path and safe slower path. Other than the double points token everything is public knowledge, so you can help younger or less experienced players to make decisions. The concept of a race game is to easy to understand, the value of avoiding black whirlpools is clear, and the small range of actions you can take keep the game simple.

There is though some really nice decision making in this game that will keep more serious gamers engaged, even if it will feel too light to them. Much of it is based on controlling your luck, for example deciding whether you should stop next to a black whirlpool and hope no one pushes you in. Other decisions have to do with knowing when to use the energy cards to do a little more on your turn and when to lose an action to recharge them. The bumping also opens up some nice opportunities for you to use one of your boats to push another boat as well as trusting, or fearing, that other boats will bump you.

The semi-cooperative game play, with players sharing some boats with other players, is great and it is the thing that moves this game from good to great. It is great for two reasons. One it makes is a more family friendly game or one that is better to play with non-gamers. Stronger players should end up sharing a boat with younger or less experienced players, helping to balance the playing field. The other reason is that people who you share a boat with have another boat that they are worried about, which makes your cooperation with them imperfect. They might spend their people on recharging energy cards to use on their other boat, when you need them to move the boat ahead. It adds a nice layer of complexity to your decision making. 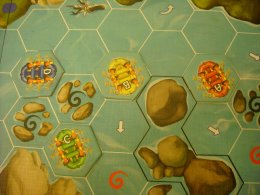 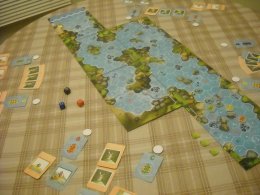 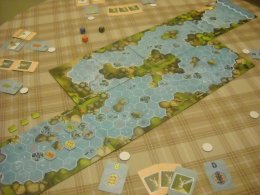 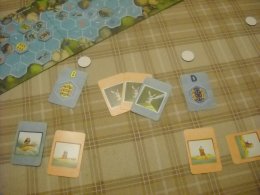 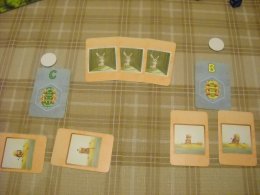 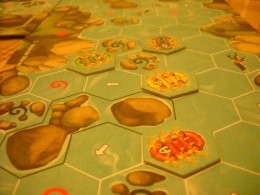 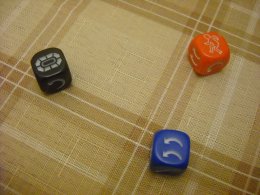 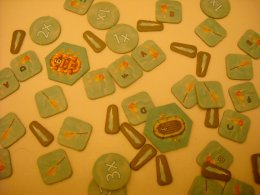 Why You Might Not Like Whitewater
You will not like this game if you hate dice. You have to go through several whirlpools and that is several dice rolls. You might have one of your people locked by a whirlpool while the next boat to enter the whirlpool ends up just having to turn once to the left. It is a light casual game, your decision making will not pay off perfectly, but over the course of the game it will.

The decisions can feel scripted. For example, every time one of my people got locked I immediately spent an energy to unlock them if had an energy I could use. Often where to go on the board was obvious, or we had to choose between two paths. There were though some clever decisions about who to bump, or choosing to back into a whirlpool in hope of getting spun around by it. Not every turn offered interesting decisions, but they were present in the game.

The main complaint, which I can live with, is the boats are hard to physically move, especially without bumping other boats or shifting orientation by accident. They are thin cardboard hexes making it hard to pick them up. Sliding them is not a solution when surrounded by other boats since gaps you can legally get through are not wide enough for hex pieces to slide through. (This is an inherent problem of hex boards and hex pieces, not specific to this game.) I had a group of older players find it difficult at first to tell which way the boats were facing. I don’t think it is a serious problem, but it could have been better.

Who Can You Play With:
This would be a great game to play with the same people you would consider playing Carcassone, Ticket to Ride, or Settlers of Catan with. The game is more family friendly than those games and it offers a much different experience than any of those games. I expect that more serious sorts of gamers will be willing to play this game with others, but they would not request this game or play it with their gaming group.

How Hard is This Game to Learn:
This game is very easy to learn. Only one person needs to have read the rules ahead of time, players won’t need any sort of player aids during the game, and you might glance at the rules once or twice during the game to refresh yourself on uncommon situations.

This is a great gateway or family game. It belongs on the same shelf as other popular medium-light games. The semi-cooperative element really makes this a neat game and good game to play with less intense players. There are some neat decisions, and while they may not satisfy the serious board gaming crowd, they do make for an enjoyable, medium-light game.