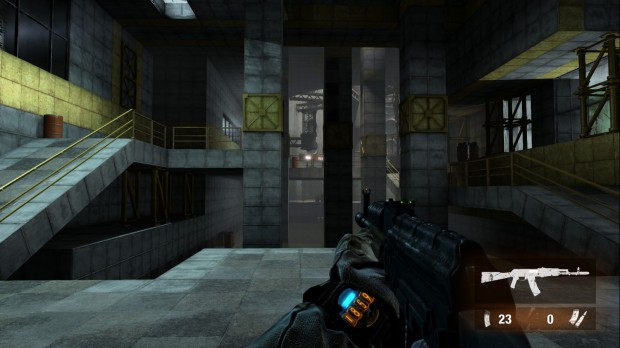 You’ve forgotten about Metro: Last Light, haven’t you?  Shame on you! Go back and play it. Go ahead, I’ll wait here while you get your fill of thick Russian accents and paranoia. You’re back? Okay, what was it you liked most about Metro?  The incredibly immersive environments?  The unique look into a world fueled by need and desperation?  Listening to the banter of your enemies as they gossip about the mutants in the tunnels?  What about the combat?  What if I told you that the latest DLC for Metro focused entirely on combat?

The “Tower Pack” is essentially Unreal or Quake as seen through the lens of Metro. The “tower” in question is a virtual simulator within the Metro universe, and you’ll spend the majority of the Tower Pack inside virtual arenas shooting waves of humans and nosalises as they spawn in.  There’s really no story to speak of–characters spoke of power fluctuations and energy spikes but nothing ever seemed to come of it. That’s a big disappointment, since the things that make Metro great are the little moments you stumble across–a dad explaining fishing to his son, an old man trying to explain what a bird is to children who have never seen the sky, that sort of thing.  All of that is essentially gone.

[singlepic id=16098 w=320 h=240 float=left]If I had to choose a single word to describe the arenas themselves, that word would probably be “adequate”.  Though the maps feel distinct from the tunnels and station of the Metro, they don’t really explore the possibilities of VR, either.   Sure, the between-round loadout screen is full of blue and black lineart polygons, but the rest of the maps might as well be titled “Generic Industrial,” “Generic Portal-esque Laboratory,” and “Generic Sewer.”  Because there’s always–always–a sewer level. One constant annoyance was that there was no way to switch loadouts without restarting an entire round. A few maps are open enough that you can just plug baddies at range, while in others you’re squished up against them so close that waves overlap–and you won’t know which until you’re already stuck with your weapons loadout.

It’s when you’ve got a bunch of baddies on screen that the Tower Pack really starts to grind. Metro isn’t really good at long, drawn out firefights. Guns aren’t particularly accurate, you don’t have a lot of ammo, and bad guys can take a ton of hits to bring down unless you take the time to line up headshots. In Last Light, the ammunition restrictions made sense within the world 4A was creating, but in the virtual arena of the Tower Pack it’s a lot less understandable–especially when the checkpoint system requires you to beat an entire round in one life.  Trust me on this one: do not play the Tower Pack with Ranger Mode enabled. You will crumble into a smoldering pile of frustration and hate.

That’s not to say that it’s all bad.  Some of the arenas are very interesting–my favorite is an extremely vertical square, sort of like a college quad.  Later levels also allow you to pay for helpful AI teammates with the funds you get as a reward for kill-streaks, headshots, and long-range kills.  After each level you’ll also get a chance to upgrade your arsenal.  While the weapon variety is great, you’re not allowed to modify the guns with custom scopes or extended clips and the like–a system both Metro: Last Light and the Faction Pack DLC included.[singlepic id=16099 w=320 h=240 float=right]

It’s not that Metro: Last Light’s combat mechanics are bad.  In fact, 4A deserve a lot of credit for replacing the floaty, meager guns of Metro 2033 with a heftier, more satisfying combat system. But gunplay in the Metro franchise has always been a last resort, if only because the player-character can’t run and gun like it was Call of Duty. This kind of strategic shooting is entirely incompatible with a small, well-lit arena. The combat isn’t bad, but combat is not what makes the Metro franchise interesting. When you get right down to it, that’s the big problem with the Tower Pack: it’s the answer to a question that nobody is asking.

Addie grew up near Detroit. After studying Cell Biology at the University of Michigan and spending a year looking into microscopes, Addie decided to volunteer--playing video games. hobbies run from gaming to music (voice, bass, guitar) to rugby. Addie is a strong supporter of indie and low-cost gaming, an area she thinks is underserved by the media.
Related Articles: Metro: Last Light
Share
Tweet
Share
Submit