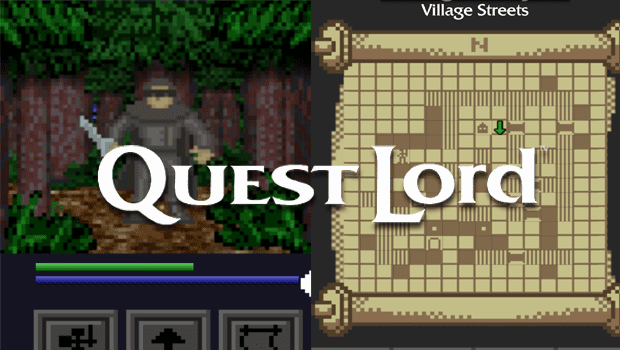 What do you get if you take the spirit, mechanics and graphics of  the hit PC RPGs of the 1980s, distill them down to their core elements, and then use them to create a brand new game for iOS devices? You get QuestLord – a rare gem of a game that’s retro not only in a graphical sense, but in its mood, execution and even core gameplay design. As a guy who still fondly remembers the days when Might and Magic was an RPG series rather than a turn-based strategy series, the moment I saw this hitting the iOS app store I knew I had to get it. Thankfully, my love of blocky, pixelly old-school graphics didn’t steer me wrong this time – QuestLord is a damn fine game, solidly executed, charming, and (for $1.99 brand new) frankly a steal.

Before starting the game itself, QuestLord lets you choose from either a human, elf or dwarf character. No class-selection is available beyond the race, nor do you assemble a party – this is a one-character game. Staying true to fantasy tropes, the dwarf functions as a kind of bulky fighter sort, the elf is more on the magically inclined side of things (and starts with a spellbook close by), with the human seeming to be the mean between the two. Very standard RPG fare, that. Less standard was the fact that your choice of race also changes your starting area and opening quests – a nice touch, and quite a surprise.

The story behind QuestLord starts off rather light on details – you receive a message from a ValKin (still not totally sure what a ValKin is – a kind of valkyrie-angel, possibly) informing you that a great evil is corrupting the land, and that a hero is needed to rise up and oppose it. Lucky you – you are that hero, aka, the QuestLord! This information is accompanied by some quick art and animation, but ‘abundant details’ is something you do not get straightaway. You have to play through the game’s story to really learn about what’s going on in the world.[singlepic id=10675 w=320 h=240 float=left]

This is a 3D style game in the vein of the earlier Might and Magics, and those of you familiar with the Etrian Odyssey series will probably feel right at home with the mix between 3D visuals and a 2D grid map – though, unlike Etrian Odyssey, QuestLord’s map updating feature is automatic rather than requiring you to personally draw walls. Moving around is accomplished by tapping the on-screen arrow buttons that move you forward, back, or turn you left and right – and I found it pretty easy to speed my way through the dungeons, villages and forests in the game after some initial experience. Next to those arrows are buttons that can let you inspect your inventory, take you the mini- and world-maps, browse your spell book, view your quests, and more. The interface is extremely solid here, and if I had any complaint it would be that I often found myself having to switch back to the mini-map quite often in some of the dungeons, just to get a proper sense of my location.[singlepic id=10676 w=320 h=240 float=right]

Actually, “Solid and straightforward” does a very good job of summing up my impressions of QuestLord. The charm here isn’t in innovation, but translation of some old gameplay mechanics into a new game. You’ll pick up items on the ground by tapping on them, then moving them around in your grid-based inventory. Combat takes place via swiping your finger across the screen to attack, clicking a button to shield or stand guard, and clicking a spell book to cast a spell once you acquire it and learn a trick or two. Upon death, you’ll be transported to the last ValKin statue you bound yourself at (accomplished by giving one an offering of food), whereupon you’ll be fully healed with your game progress reverted to the last permanent save that was made. Permanent saves are created whenever you go to the main menu or exit the app, so those of you worried about the game being too punishing of death (a legitimate worry in the old school), take heart – QuestLord is a bit easier than that.[singlepic id=10680 w=320 h=240 float=left]

Describing QuestLord as “Solid and straightforward” runs the risk of making the game sound dull, but I want to stress that that’s not the case. The graphics are well-crafted for what they are, though you have to appreciate pixel art to agree with that estimation, and even then you have to admire the throwback to the 1980s that QuestLord really seems to be going for. There’s a variety of areas to explore, interesting monsters to cut down, and the entire game is charming – even unique, since really, there just aren’t all that many games like this on the iOS platform. The cost of being so true to the old-school games is, of course, a lack of innovation. You likely won’t find anything new in QuestLord, conceptually. But what you will find is an enjoyable game that will likely keep you interested enough to get to the end, if you’re at all a fan of RPGs.

And that’s the ultimate verdict on QuestLord – it’s charming, it was made with a certain presentation and gameplay style in mind, and it delivers. Grab it at Apple’s app store or via Google Play if you want a fun, light-hearted 80s style dungeon crawl.