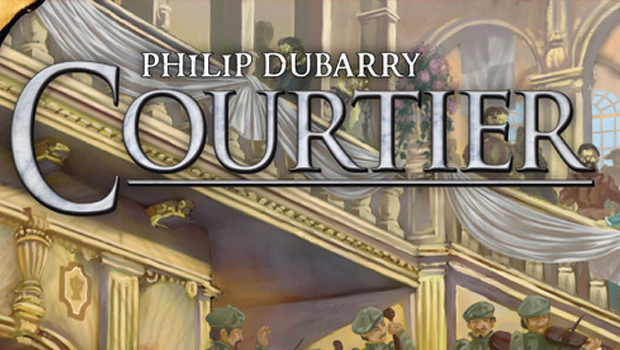 We like cohesive stories. In almost all forms of media we have trilogies, volumes, series and collections. These overarching themes and epic stories can only be told only in small segments or lengthy ones (I’m looking at you, Peter Jackson). Over time, consumers grow attached to their favorite characters and their larger stories take on a life of their own. We see this often in literature and movies, and even in music and art. But, does this paradigm work for board games?

Welcome to the glorious world of Tempest, AEG’s universe full of intrigue, honor and victory points. Currently with five games in the Tempest series, including the dainty behemoth Love Letter, AEG has established the encompassing story of this kingdom. All stories need a beginning. This is where Courtier comes in, introducing the inner workings of the Tempest court and the factions that divide the kingdom.

The opinion of the Queen of Tempest is apparently effortless to sway. If you have a venture that you want to enact, the best way to secure the funding and support is to gain the trust of the key players in the court. Once you have them in your pocket, the Queen will undoubtedly show you favor. In Courtier, players attempt to fulfill the most petitions and collect the most prestige. The rule book has a huge chunk of prose that lays out the story, but ultimately, you place cubes and collect goals.

The board is segmented into areas of power, from the Artisans to the Royal Family. Each area has characters who players will try to influence during the game. The primary way this happens is through the play of influence cards on a player’s turn. Influence cards allow for the placement of influence cubes on to the different characters on the board. Players have a personal petition that they are trying to complete for victory points, as well as a few public petitions that anyone can complete. These petitions are completed when a player controls the specified people on the board.

Each area of the board also provides a perk for the player who has the most influence in that area at any given time. These perks are very powerful and are highly contested during the game. Most of the perks are extra actions that a player may take, or related to scoring victory points.

A player’s turn generally consists of playing a single card, completing one single goal if possible, and then drawing back up to five cards. Cards can come from either the influence deck or the power deck. The power deck contains cards that are primarily for cube manipulation, like switching or removing cubes. Instead of playing a card a player may take an influence cube from the supply and place it in their available pool, or a player may discard any number of cards.

Every time a petition is completed, the cubes on the affected people are removed and a fashion card is flipped over. Most of these fashion cards add neutral influence to an area of the board, thereby aiding in the completion of more petitions. Shuffled in to the bottom of this deck is the game ending “The Queen is Arrested!” card. When this comes up, game play is immediately stopped, and the winner determined based upon the value of the completed petitions and other accumulated victory points.

People familiar with the Tempest line will recognize the different factions and characters depicted in Courtier, as all of the Tempest games are illustrated by the same artist. The layout of the board is functional and clear. The rest of the graphic design is functional. Overall the visual appeal of the game is mediocre. There is nothing really to pull players into the game; it all seems very sterile. It should be noted that the design and art do not detract from the game play, just that they could have embellished a little more. Component quality is high, as we have come to expect from AEG.

The rule book for Courtier is good enough to get the point of the game across, but misses some subtle necessities. In the first few plays there was a lot of referring to the rule book. The only major issue was the rule regarding control of the Royal Family. This rule is not clearly stated in the rule book, the associated faction control card or the game board. It is however clarified on a power card that does not really have to do with the rule. What the rule book lacks in clear statements, it makes up for with dialogue heavy narrative. Due to the simplicity of the design, teaching new player takes only a few minutes.

The game balances players fairly well. In a two player game there is a ‘ghost’ third player that is simply used to offset the control of the two players, and still plays smoothly. Like most area control games, more players can lead to more contention for space. With the full four player compliment, the game can get a little cut throat. Overall, the game plays well within the range of two to four players. Most of the games took about an hour regardless of players.

If you came to Courtier looking for theme, you best be looking somewhere else. Unfortunately, Courtier does not do a ton to add to the ‘lore’ of the Tempest line. This game is a hardcore eurogame, cubes and all. Sure, there is some really small, hard to read flavor text on some of the cards, but this does little to pull you into the story. Listening to people talk during the game, the conversation is about cubes and cards, not influence and power. It is kind of fun to play Courtier back to back with other Tempest games, but there is not much narrative there.

That being said, Courtier offers a simple, yet deep game. It is full of easy to understand, yet far reaching choices. The choice between power cards and influence cards is a big deal. Most of the influence cards are specific to a person on the board, so you are likely to get one that does nothing for your particular petition, but most of the power cards are very specific in how they might help you. I have a feeling the the player who discards their hand, thereby wasting a turn, is put into a better position than the player who wastes their turn placing a cube that they don’t really need. Because of how the board is laid out, it is very easy to take in the game state and come to a solid decision on your turn. 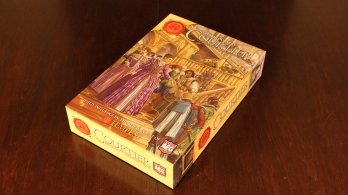 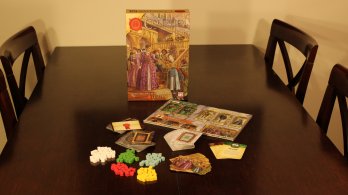 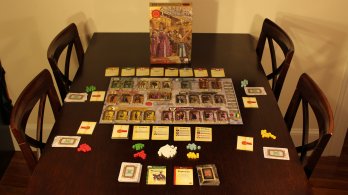 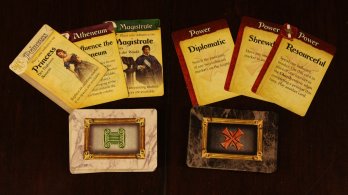 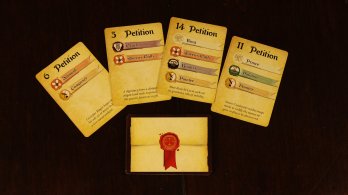 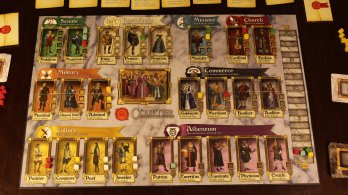 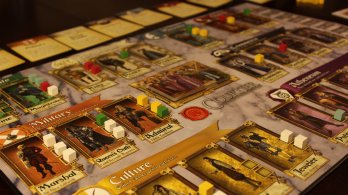 It is not obvious, but the biggest currency in the game are the influence cubes. If a player does not pay attention to how many cubes they have, they are going to run into trouble. These cubes act as a great balancing mechanic for the game. The player who has the most control also has the least ‘currency.’ You quickly learn that the faction perks you get for controlling the different groups on the board are really great. Shortly after, you learn that in order to complete a petition, you must sacrifice your control. This negative feedback loop is very interesting to play with.

The end of the game is randomized and unknown. This lead to some grumblings with the people I played with. All you know is that the game end card is shuffled into the bottom of the fashion deck. This means that the game can span seven to twelve completed petitions. This uncertainty makes the previously mentioned balance of power very unforgiving. If a player chooses to cash in on their influence aiming for the eight round mark, and then the game carries on for another four or five rounds, they will have little power to do anything. The same is true for someone who expects the game to end in twelve rounds. I am not a huge fan of decisions made because ‘it is the last turn;’ however, I don’t think this approach is the right solution.

The effect of neutral influence makes teaching the game very straightforward. For the first few turns none of the personalities are sufficiently filled with influence to have any effect. This means that the first few rounds are rather benign. Nice and cushy for the new player. This feeling changes rapidly once the first petition is filed, most likely causing a flood of neutral influence. From here on out the game is in full swing. The whole dynamic of the second half feels vastly different from the slow, lazy first half.

Courtier is a solid game, but I don't think it is groundbreaking. To its credit, I don't think it was trying to be anything other than a straightforward eurogame. If you are interested in a medium weight game, possibly on the lighter side of the spectrum, Courtier is worth consideration. Unfortunately, there is not a ton in it to lift Courtier above the vast sea of other medium weight eurogames for two to four players. If you get a chance to play it, I highly suggest you give it a try. But if you are looking for a suggestion to buy, you may want to proceed with caution.