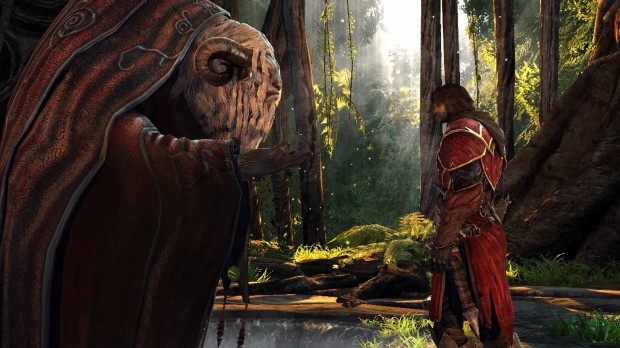 How far can production values get you?  That’s the fundamental question facing anybody when deciding how to rate Castlevania: Lords of Shadow’s Ultimate Edition.  Developed by MercuryStream and Kojima Productions–yes, that Kojima Productions–Lords of Shadow debuted on consoles in 2010 before Climax Studios finally ported it over to the PC in 2013.  Unfortunately, the latest entry in the venerable Castlevania franchise tries too hard to be “cinematic” and suffers for it.

So, let’s just get this out of the way right now: Lords of Shadow is beautiful–and not just because of slick technical feats.  No, Lords of Shadow has an incredible artistic vision reminiscent of Guillermo del Toro. You’ll spend every second you’re playing Lords of Shadow in eager anticipation of the next incredible vista or new creature.  The action is fluid and dynamic–never hitching or stuttering even on my aging PC.  It really is something you have to see to believe.

[singlepic id=15883 w=320 h=240 float=left]Lords of Shadow also boasts a pretty incredible score. Switching effortlessly between soaring choral arrangements and driving drum beats, the music never fails to set just the right mood to match the on-screen action.  It really is that good.  Unfortunately, any good will levied by the score is utterly destroyed by the truly abysmal voice acting.  The player-character speaks so softly that you’ll start to wonder if he’s on sedatives, and somehow the narrator is even worse.  A 30-second monologue precedes each level, and the speeches are just dripping with excess pathos and melodrama. You’ll begin to wonder how badly a Patrick Stewart sound-alike could miss the mark–and then you learn the horrible truth: it’s actually Patrick Stewart!

As bad as the voice acting is, the real shame of Lords of Shadow is the camera. For reasons known to none but it’s developers, Lords of Shadow brings back the camera.  Think back, dear reader.  Remember how much you loved walking into a room, and then walking right back out when the camera switched position?  How about when important plot points and puzzle solutions hide out of view of the camera?  And don’t forget my personal favorite: combat where you can’t see who you are fighting. Not even Lords of Shadow’s interesting light/dark magic gimmick–light attacks replenish your health while dark attacks cause more damage–can bring much fun to the table when the bad guys are hiding off-screen.[singlepic id=15884 w=320 h=240 float=right]

The camera could be forgiven–or at least endured–if Lords of Shadow had more originality to it.  Unfortunately, playing through Lords of Shadow is an exercise in naming other games.  Combat feels just like God of War–only worse.  Platforming feels just like Prince of Persia: The Two Thrones–only worse.  Scaling a gigantic monster feels just like Shadow of the Colossus–only much worse.  Controls are also pretty bad, though you’ll feel it most when the camera switches position and you struggle to get Gabriel to move in the direction you want him to go.  The “interact” button is also really touchy–if you aren’t in just the right place when you try to activate a switch, nothing happens.

For the sake of disclosure, I’ll admit that I didn’t finish Lords of Shadow–and no, I don’t feel bad about it.  I played Lords of Shadow for about ten hours–ten irretrievable hours– and was about ⅔ of the way through it when I gave up on it. The saying goes, “time enjoyed is never wasted,” but Lords of Shadows proves the opposite: time wasted is never enjoyed. I suppose it’s possible that the last third of the game is a magical land of roses and sunshine, but given the fundamental issues with the camera and the overall lack of originality thus far, I really, really doubt it.

[singlepic id=15880 w=320 h=240 float=left]What’s most frustrating is that Lords of Shadow had a ton of potential.  The visuals and artistic design are so good–so mind-numbingly, spectacularly amazing–that despite the horrible voice acting and merely average gameplay, I still wanted to keep playing to see the next piece of incredible art. But that camera ruins all of that.  Clearly, Lord of Shadows wants to feel “cinematic” but it goes too far by sacrificing gameplay on the altar of visual splendor.