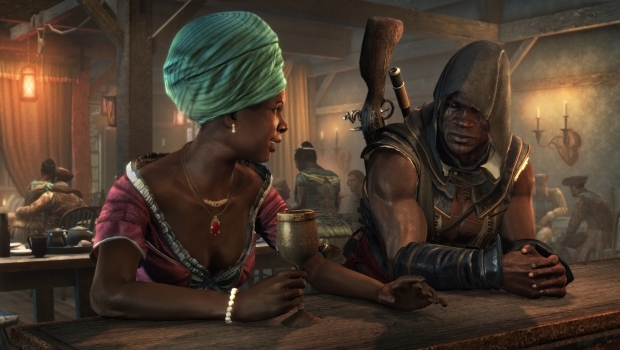 In Assassin’s Creed IV: Black Flag, there is only a pair of references to Adéwalé’s skin color and how it affects his life. He likely couldn’t be accepted by a white crew as Captain, and even Benjamin Hornigold snorts in derision that Kenway ‘lets’ Adéwalé carry a pistol. The Golden Age of Pirates was also the height of the slave trade, and Adé was born and raised on a plantation himself, though he was reluctant to discuss those days. Where Black Flag merely touches on these issues, Freedom Cry isn’t shy about tackling these compelling and thought provoking themes of slavery, the struggle to achieve it, and the price of keeping it. We set sail once again on the high seas, but this time it’s a little bit different.

The year is 1735 — 15 years after the conclusion of Assassin’s Creed IV: Black Flag. Adéwalé has followed through on his training and has become an assassin himself. Having joined the brotherhood, he sets sail to carve his own destiny. Unlike much of the DLC in other Assassin’s Creed titles, this adventure doesn’t take place in an alternate timeline. Adéwalé finds himself embroiled in the real-life uprising of the Maroons – slaves that have been bound to service on the island city of Port-au-Prince.

Over time Adéwalé finds his moral imperative to save the people held captive. Much like when the British held pirates captive, plantation owners will begin murdering slaves if Adé doesn’t rescue them quietly. Much of the content revolves around freeing unfortunate souls from bondage, meaning “tail this person”, “follow that person”, “eavesdrop on this pair of guys”, etc. Instead of being unlocked by diving for schematics and money, rewards are offered at gated intervals. At 25 freed slaves you’ll get another rope dart pouch, at 300 you’ll get a steel-forged machete, and so on until you reach the ‘special reward’ at 500 (It’s not that special – it’s credits for cosmetic multiplayer goodies).

There is a vastly different feel to Adé’s approach to combat. The delicate wrist blades take a back seat to dual-wielding an oversized sugarcane machete in one hand and a blunderbuss in the other. It lacks finesse but conveys the brutality of purpose behind his mission – an interesting juxtaposition to Kenway’s Errol Flynn-esque swashbuckler style. The addition of firecrackers as a tool to attract attention to a specific area is also a nice change, though you’ll do plenty of whistling to pull foes into the underbrush as well.

Freedom Cry is a small slice of a much larger world. The DLC takes roughly four or so hours to complete, eschewing the wide open world of the Caribbean for a tighter focus on the nine separate story missions showcasing Adéwalé and his struggle to free the slaves of Port-au-Prince. Whereas the plantations in Black Flag felt repetitive and similar, they serve as a very real backdrop to this story in Freedom Cry. My complaint is that there is no closure. The real revolt didn’t swing into full force in real life until later in the 17th century, so much of what you are doing here is simply setting the stage. It would be nice to have some sort of mechanic that utilized the 500+ slaves I rescued, like a rebellion or even a small revolt against their colonial oppressors.

I did encounter a few annoying bugs during my journey with Adéwalé. During one mission I was asked to complete a series of objectives without killing anyone – I was careful to do so and received no credit. Similarly, I had a courier with a package get stuck on top of a haystack with no way to take him down other than free-aim shoot him.

The sound in Freedom Cry is remarkable. The music isn’t recycled from Black Flag, instead using music you might imagine you’d hear in Port-au-Prince. The slaves sing songs to keep cadence in their work, and they all speak what sounds like Kromanti. Adéwalé’s uneasy sometime-ally Bastienne Josephe’s voice actress turns in a fantastic performance, and Tristan D. Lalla’s work as Adé is as solid as always. I’d throw it a vote for some of the best audio work across the board this year.

In the end, the DLC is $9.99, or double that for a season pass. While the story is compelling, it’s also fairly light on a meaningful denouement. I enjoyed my time with it, but I can’t help but feel like it could have waited a little longer to polish off some of the bugs, integrate the companion app (it’s unsupported for the entire adventure - no map, no fleet things, etc.) and give us maybe one more mission to add at least some level of closure. I enjoyed my time with Freedom Cry, and I suppose the fact that I want more of it says something.