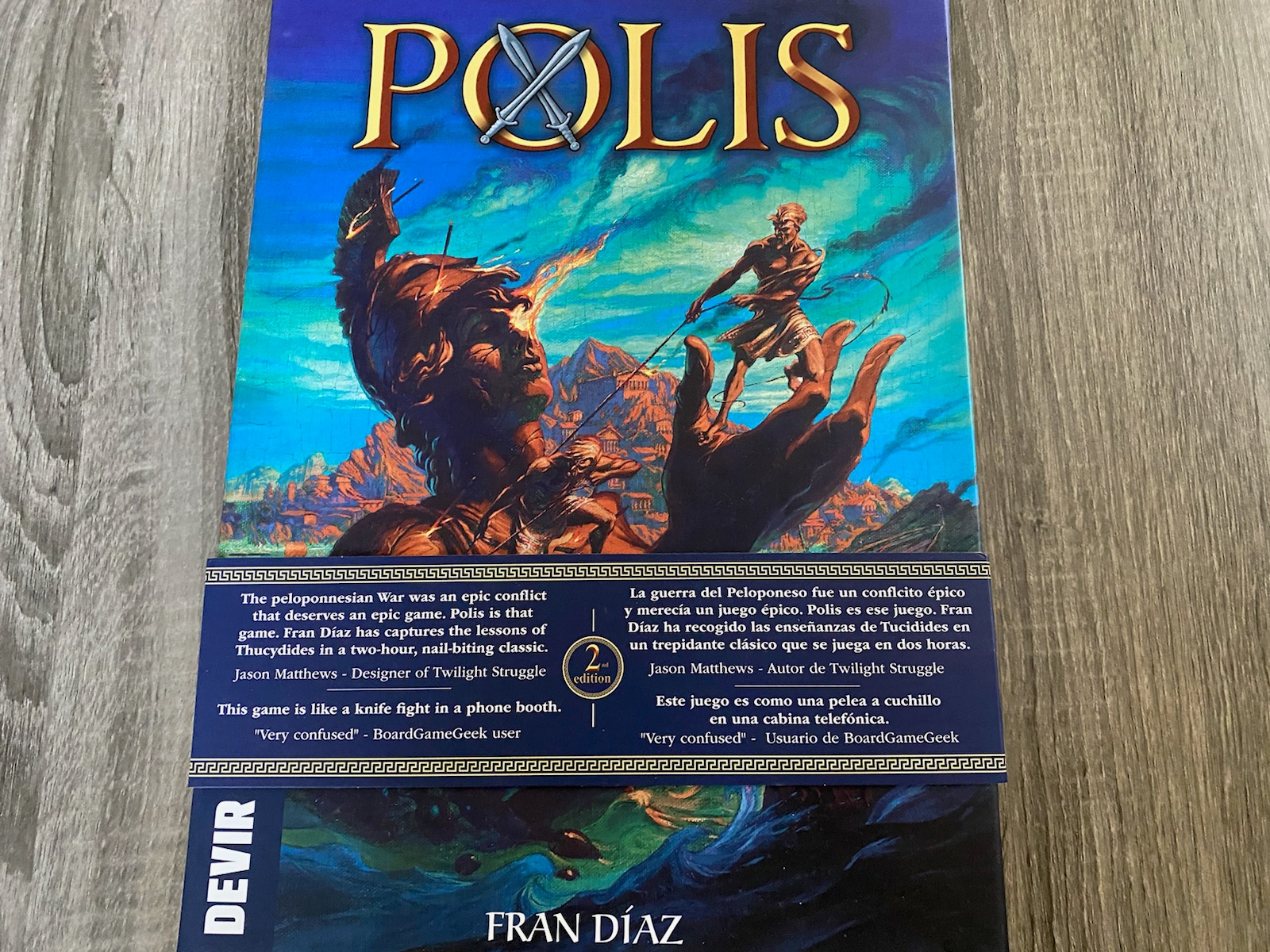 The wrap that the second edition of Polis comes in features a full-throated endorsement from Jason Matthews- the designer of Twilight Struggle, one of the most highly regarded two-player board games to date. It also quotes a BGG user, who likens the game to a knife fight in a phone booth. While I don’t necessarily disagree with this comparison, I contend that a more apt analogy would be no holds barred competitive public restroom use- you’ve got to do something, nothing is all too appealing, and you’re terrified of what your opponent is going to do. And I love it.

The basic progression of the game has players alternating turns of taking two of the game’s eleven actions, each of which leave you second-guessing yourself. Building hoplites, galleys, and merchants enable you to project your military might, limit your opponent’s options, and trade for the elusive wheat you need to feed your people. However, they all cost population, which counts towards your victory at the end of round three. Moving your military units is essential, but that likewise costs prestige, your other victory tally. Trading is one of the easiest ways to acquire wheat, and building projects gives you prestige, but which do you need most? Collecting tribute is your only way of increasing your resources, but that also requires both spending prestige and having hoplites present in the region. You can spend a prestige to lay siege to a polis and convert it to your side, but a protracted siege gets obscenely expensive really quickly. 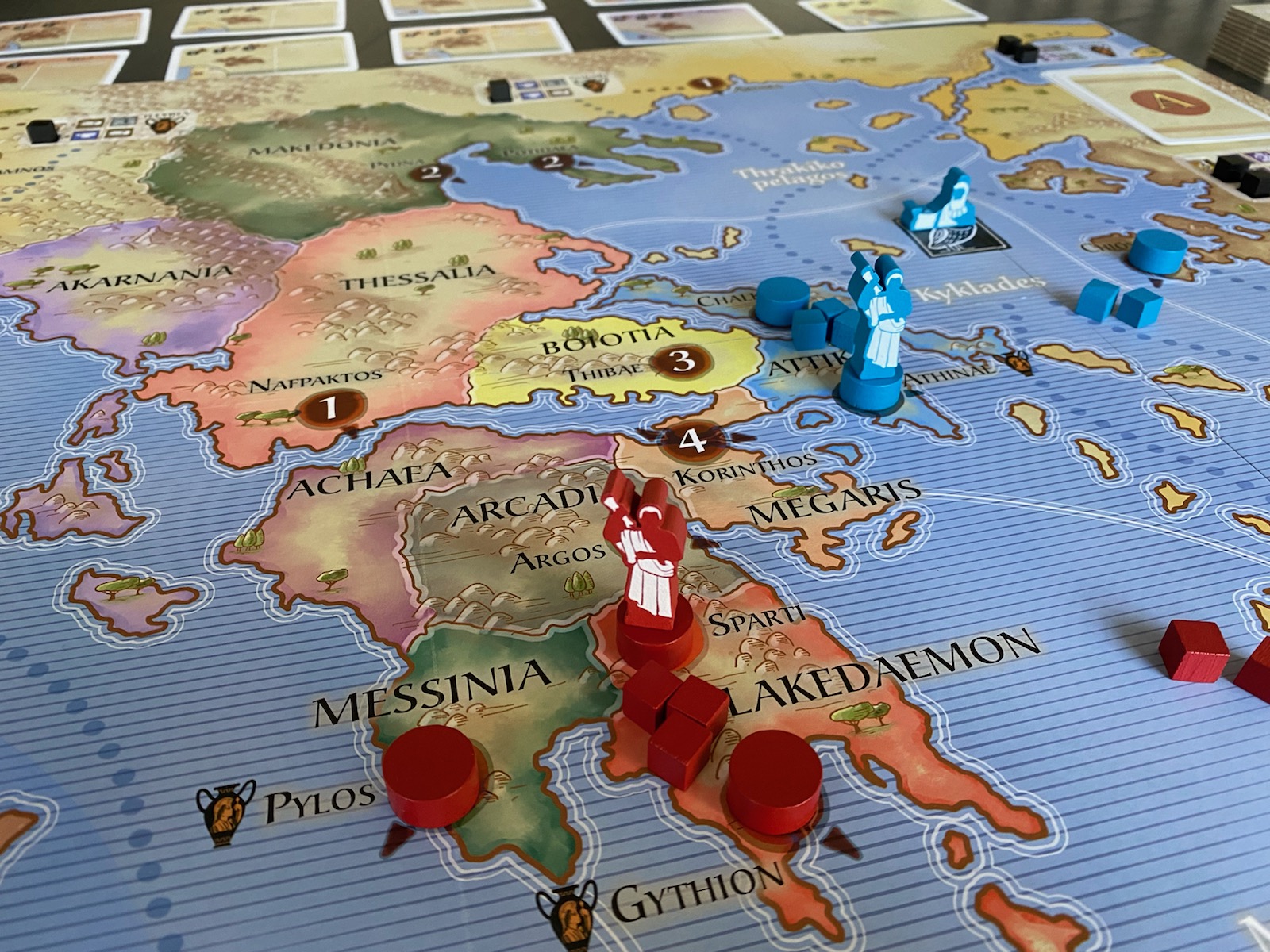 And now we get to my favorite fancy lad, the Proxenos. The rules describe him as a diplomat, but given that all he does is travel between cities and start civil wars, I’d say that is toeing the line of euphemism. Good news, moving your Proxenos is the only action that is potentially entirely free! However, chances are, as the game goes on, he’s going to have to bribe his way wherever you need him, costing you your precious semi-wild silver. Finally, you can start a civil war, bringing a polis into your league, but also costing you a hefty chunk of silver.

All of this has a sense of urgency to it. You can’t afford to waste a single action, because at any time either player can pass, upping the price on anything you do for the rest of the round. On the other hand, can you afford to pass; are you sure your opponent won’t whip out their abacus and pull some economic wizardry to afford a string of uncontested actions that leave you in the dust? After everyone’s done for the round, you feed your populace, and, if you’re Uncle Wheatybags, you can pay excess wheat to grow your populations. Since it’s Ancient Greece and everything’s terrible, you lose half your wine and wheat and head on to the next round. 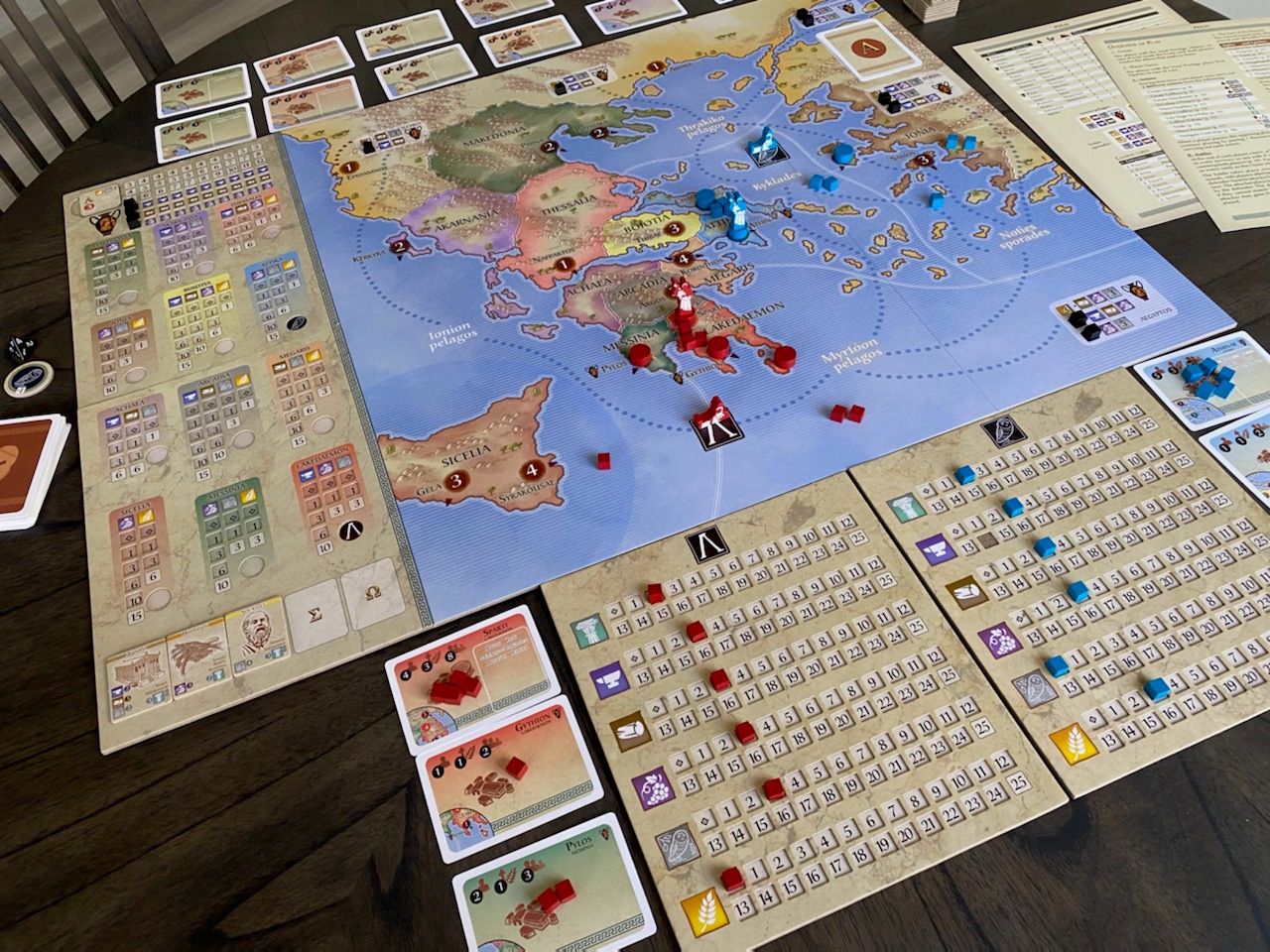 This is where I’ve got to dig the thorn out of my metaphorical paw. At the beginning of each round, you reveal a round event that affects the board state, a mechanic that will be familiar to anyone who’s played Orleans. These events are a bit more drastic and one-sided than those in Orleans, especially a couple of the last round options. In a game that otherwise has a small amount of randomness that can be mitigated by over-preparedness, the events felt a bit out of place. If the depth of mechanics makes Polis a Thanksgiving dinner, the event cards are sweet potato casserole- I’ve already got enough to eat, and it’s a bit hard to justify adding it on top. Although I could be wrong, event cards could be the cranberry sauce, and once people have gotten enough games under their belt, they could add extra complexity to what had become bland.

Because holy moley, does this feel like a game you could get really good at. Sure, both factions have obvious strengths, weaknesses, and needs, but your options for going about dealing with all of those have an absurd amount of permutations. For example, Sparta has a clear advantage on land, but has no ready access to the wheat they need to sustain population. Do they go all in on occupying areas that produce wheat in tribute, potentially stranding their hoplites? Do they start producing galleys, knowing they’ll get pushed around by Athens’ superior fleets, with the idea that they’ll probably be able to sustain at least one trade route and cost Athens a lot of prestige chasing them down? Or do they abandon population entirely, have the minimum one population per polis, and just hope to kick Athens’ teeth in hard enough with huge groups of hoplites? I honestly couldn’t tell you, but I look forward to playing enough to have an idea. 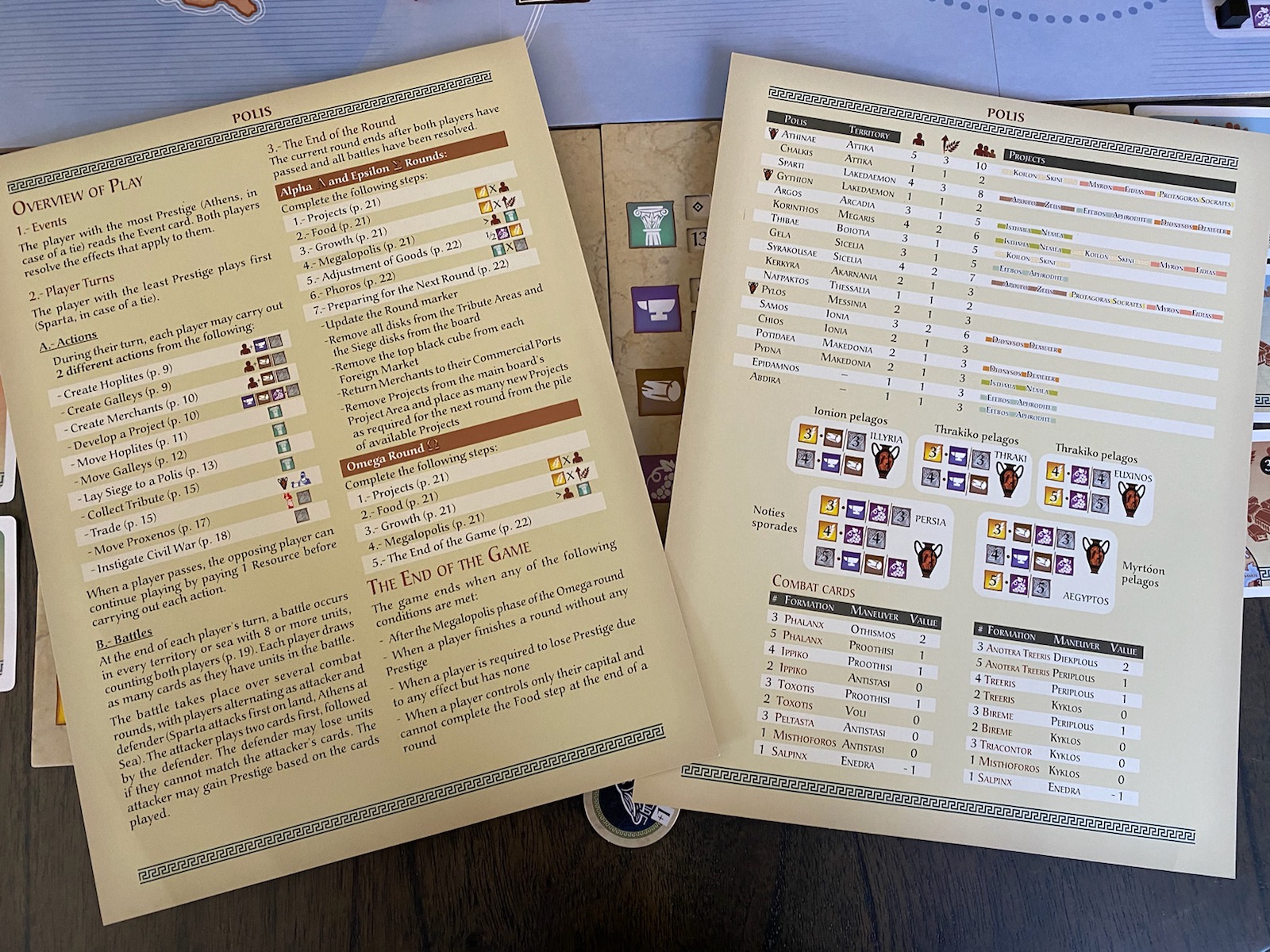 Polis wants you to play it enough to master it. My first game, including teach, took just over two hours, and I can easily see two proficient players turning this into a 45-90 minute game. The rules are almost immediately grokkable, and the map and simplicity of pieces make sure that your mistakes were your own, not because you didn’t see a line that was bolder than the rest, or you confused one mini for another (glares at War of the Ring and Rebellion). Polis achieves its variance and complexity from having its players swing their redwood-sized decision trees at each other, and for that, I think it earns its place in anyone’s heavyweight two player collection.

It takes a lot to take a shot at the crown of heavyweight 2 player games. Polis uses an interesting hybridization of dudes on a map and resource management, combined with a wide-open player-driven game arc, to bury a spear in the throne.

Nick grew up reading fantasy novels and board game rules for fun, so he accepted he was a dork at an early age. When he's not busy researching the intricacies of a hobby he'll never pick up, Nick can be caught attempting to either cook or befriend local crows.
Related Articles: Polis, Tabletop
Share
Tweet
Share
Submit