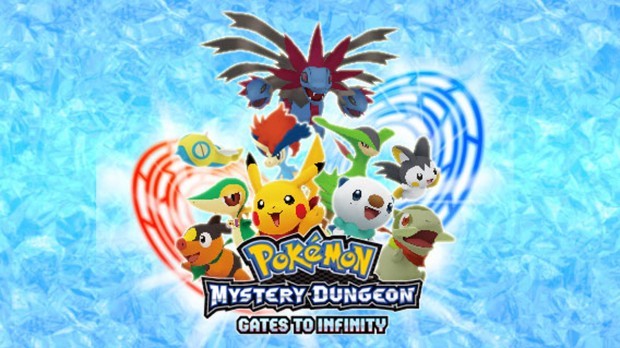 Pokémon games have long been a staple in the portable gaming world with the continued success of each sequel to the red and blue versions that started a phenomenon. Less popular though, have been the Pokémon Mystery Dungeon games, which have been around since the Super NES days and endeavor to create a more hands on exploration game where the player takes on the role of a Pokémon. Pokémon Mystery Dungeon: Gates to Infinity is the next in a long line of virtually similar games, releasing every few years with only minor tweaks.

[singlepic id=11230 w=320 h=240 float=left]If you’ve played any of the Mystery Dungeon games, then you know the drill: you’re a human whose been turned into a Pokémon — again. You answer a few questions, and choose which Pokémon you are, then you start playing. The game revolves around exploring dungeons that are generated randomly, so that you’ll never explore the same dungeon twice even if you enter the same dungeon multiple times. The combat is a turn-based/real-time hybrid RPG wherein your Pokémon level up and become more powerful. A lot of the stuff players learned from the other Pokémon series applies here: Pokémon types create weaknesses and super-effective attacks, and many of the Pokémon moves and items from the classic series make an appearance in this game.

Unfortunately, as has been the case with all games in this series, the gameplay is repetitive, dull, and at times painful to play. Exploring dungeons isn’t at all exciting, and most of the time it’s dreadfully easy. Dungeon layout may enhance the game’s unpredictability, but it leaves out any chance of level design and so players will often find themselves twisting and turning around confusing and backwards dungeons, or enter a dungeon to find the exit has spawned right next to them. The combat isn’t particularly fun either, as the randomness of the spawning enemies and awkward style of combat forfeits any chance of creating strategy.

Of course, you may not take part in very much combat at all, because of the game’s non-stop, repetitive, and poorly written dialogue sequences. Characters drag out conversations, reiterate things one hundred times, and talk about their feelings for literally hours throughout the game. This is especially true at the beginning of the game, where at one point I heard more-or-less the same conversation three separate times throughout a dungeon. I had to take breaks from playing after each exhausting dialogue sequence.

[singlepic id=11231 w=320 h=240 float=right]The controls of Gates to Infinity are appallingly backwards. Players have a short window to pull up a menu of attacks and choose one, and other things that should be simple, like accessing the inventory to use an item, take more time than they should. Other things, like walking down a narrow hallway, can become a task, as each hall is very small and hard to wiggle your way into, with the overly sensitive control pads.

The graphics in Gates to Infinity aren’t bad, but the under-utilization of the 3D capabilities in Mystery Dungeon’s debut 3DS game is endlessly disappointing. Character models are flat and the whole thing seems like it was thrown together for a different platform and then ported. For a game that seems to aim to bring a more exciting approach to a turn-based combat system, the combat animations are very boring. Small, uninteresting blurs float from one character to another in each animation, which draws players even further out of battle.

The music in Gates to Infinity is pretty good, but every other sound in the game is not. Especially the sound of dialogue scrolling across the screen, which you may in fact be listening to for a majority of the game. The sound effects for battles are also pretty annoying, which makes the overall experience on the ears uninspiring to say the least.

[singlepic id=11232 w=320 h=240 float=left]I didn’t have a chance to play the multiplayer as nobody was nearby enough to me to join my game, but I imagine this would be a great functionality. Unfortunately, the game relies too heavily on it. Each time you fall in battle, you have to start from the beginning again unless you can get a friend to jump in and save you. However, if help never comes, this just adds to the already-disappointing game design flaws.

I’ve been a huge fan of Pokémon from the beginning, and it’s hard for me to say that anything related to Pokémon is horrible, but Gates to Infinity makes it easy to overcome my personal bonds with the franchise. With a complete lack of game design, uninspired dialogue, and sub-par technical performance I can safely say that Nintendo phoned it in on this one. If you’ve played any of the Mystery Dungeon games, you’ve all but played this one, and it’s disappointing to see Nintendo ignore the perceived flaws with each of the other games in the series. It’s simply not worth the $35 asking price, and worth even less of your time.