Pokémon Conquest combines the world of Nobunaga’s Ambition with the Pokémon universe.  Nobunaga’s ambition is a turn based strategy game based in feudal japan, and was originally released in 1983 for the PC. Since then, a series of turn based strategy games under the Banner of Nobunaga’s Ambition have hit the shelves, the most recent being Nobunaga’s Ambition: The Way of Heaven released in 2009 for PC, and later for the PS3 and Xbox 360. Pokémon first debuted as a monster catching and battling role-play game in 1996.This franchise has also featured anime, manga, and trading cards, and has become the second most lucrative videogame series ever. One might question how well these two universes can combine in a single video game. However, Pokémon Conquests comes together as a fun and addictive experience. Fans of the Pokémon franchise will enjoy it as the best Pokémon spinoff since Pokémon Snap. But even without the Pokémon label, Pokémon Conquest is a solid turn based strategy game that anyone can pick up and appreciate.

[singlepic id=9289 w=320 h=240 float=left]The game takes place in the region of Ransei, an island that is home to 17 feudal kingdoms. Since the kingdoms were founded, warlords have battled with one another with the ambition of controlling the entire island. However, none have ever succeeded. Legend states that if a single warlord were to unite all the kingdoms, the legendary Pokémon that created Ransei would appear before that warlord. Nobunaga seeks to make this legend a reality so that he can use the power of the Legendary Pokemon to destroy all of Ransei. The player begins the game as the warlord of the kingdom Aurora, and is tasked with the challenge of conquering the entire region and defeating Nobunaga.

Pokémon Conquest hosts some wonderfully deep gameplay. Warriors and Warlords are people with the inborn ability to communicate with Pokémon without words. They use this ability to form links with Pokémon and then bring those Pokémon into battle. The strength of a link is measured by a percentage out of one hundred, and each warrior is only able to form a perfect link of 100% with one species of Pokémon. If a link grows strong enough, the Pokémon will evolve. Warriors can form links with a number of Pokémon, however only one Pokémon can be brought into battle per each warrior. As I played through the game, I never actually achieved a perfect link between any warrior and Pokémon. In fact, I don’t believe I’ve ever even gotten close. My experience is that the campaigns are too short for perfect links to become relevant.

The different kingdoms provide a large variety of battlefields. Each kingdom houses a palace where battles to control the kingdom are held. Battles are also waged in caves, on farms, and in other settings. However, the Palace battlefields are much larger and each provides different obstacles and objectives that hinder and help a warlord on his or her path to victory.[singlepic id=9288 w=320 h=240 float=right]

There are battle mechanics at work in Pokémon Conquest that resemble traditional Pokémon games. For the uninitiated, the first most recognizable is rock/paper/scissors which determine type advantage versus vulnerability. For example, fire beats grass, water beats fire, and grass beats water. Another similarity is Pokémon abilities, many of which are adapted from the role-play games. Levitate, for instance, would prevent a Pokémon from taking damage from a ground type attack in the traditional games. In Pokémon Conquest, Levitate still prevents these attacks from dealing damage, but also allows the Pokémon to freely move over obstacles whilst navigating a battle field.  Finally, the stats system has been simplified, though it remains largely the same. Special attack and special defense have been scrapped from the game, leaving only attack, defense, and speed. Additionally, a Pokémon’s accuracy can be raised or lowered by items and attacks. Pokémon Conquest did add one stat – range – which will be explained later.

The strategy element brings new gameplay mechanics to the table, and sets Pokémon Conquest apart from the (literally) dozens of past games. This is a big step, as the Pokémon franchise is a well-guarded product. The developers have to balance the rabid Pokémon fanbase with bringing something new to gamers, including new character properties. One of these properties is the movement system. Battlefields are divided into tiles, and a Pokémon is able to move a number of tiles in a single turn based on its range stat. As one would imagine, a Pokémon like Eevee is able to move far, while one like Onix can only travel a few tiles. Pokémon attacks also add to the depth of gameplay. Just like a sword swing or bow shot wouldn’t represent the same attack range or space, different Pokémon attacks have different spatial functions. Some only affect the space directly in front the attacking Pokémon, while others snipe opponents from three tiles away. Stronger attacks tend to be more complicated in their attack range, which forces the player to use more strategy as their Pokémon become more powerful.

It’s surprising to see Pokémon concepts in a strategy game. What is more surprising is how well they come together. These mechanics work so naturally that despite the depth of gameplay present, the only learning curve in Pokémon Conquest is understanding type effectiveness, and if you’ve ever played a Pokémon game before, that shouldn’t be a problem.

[singlepic id=9287 w=320 h=240 float=left]Pokémon Conquest offers the player two control options. The first utilizes the D-pad and buttons, and the second takes full advantage of the touch screen. Both of these options work seamlessly, however I preferred the former. With the first option, the player uses the D-Pad to control a curser, and a menu appears when something is selected with the A-button. Many of the other buttons can be used as shortcuts to functions like controlling the camera. The touch screen/stylus option works very much the same way. One simply selects by touching something with the stylus, and a menu will appear. This control system works for everything in the game from moving warriors around your kingdoms, to battling your enemies. In battles, one first selects the Pokémon they wish to activate. Immediately, tiles that can be moved to will become highlighted, and all the player has to do to is select one to position the Pokémon there. After this, a menu will appear giving the Pokémon the option of attacking or waiting. If you select attack, all you have to do is pick a direction to attack in, and your Pokémon will do the rest.

I am really torn over the graphics in Pokémon Conquest.  The game relies heavily on portraits to depict the warriors and Pokémon outside of battle.  These Portraits are fantastic. The detail is magnificent, and I don’t think Pokémon have ever looked cooler in game. Additionally, all of the animations go off without a hitch, and attacks look especially good. However, Pokémon sprites, the world map, and battlefields are underwhelming. There is enough detail to easily recognize what these things are, but they look blocky. The Pokémon Audino in particular looks chunky, and Jigglypuff’s face is… strange. Compared to other contemporary DS titles, Pokémon Conquest’s graphics come off as unpolished.

Like the graphics, I find myself undecided with Pokémon Conquest’s audio. On the one hand, the music is really good. The over world theme, for example, is exciting and noble, and does a great job of creating a feudal Japanese atmosphere. If I were a warlord, this song is exactly what I would want to hear as I trek to rival kingdoms, and prepared for battle. However, there is a very small number of tracks in the game, and many kingdoms don’t even get their own unique music.  The Pokémon sound effects are taken straight from the role-play games, which is good for continuity. However, a lot of these noises sound like the digital shrieking we were treated to in the original Red and Blue games.

Pokémon Conquest’s replay value is through the roof. After the first campaign is completed many more stories that allow the player to control different warlords open up. These different stories have their own objectives that the player has to complete in order to win. After 33 of these stories are completed, a campaign similar to the first one becomes available. In addition to these, more stories can be downloaded from the Nintendo WFC. All of this, combined with online multiplayer, will leave one with hundreds of hours of Pokémon themed turn based strategy excitement to enjoy.

Pokémon is a franchise that I grew up on. I watched the anime, I bought the trading cards, and I played the games. For me, Pokémon Conquest crossed a threshold. There has always been a gap between what a young gamer would see watching the anime, and what he or she could accomplish in the game. Pokémon battles are supposed to be full of spatial strategy, and explosive action. The rock/paper/scissors style fights just never lived up to this. Despite my mixed feelings about the game’s audio and graphics, Pokémon Conquest is a game I have been waiting for most of my life:  We are finally able to strategically place our Pokémon in a battlefield, and use attacks that behave uniquely. This is the way a Pokémon battle is supposed to be fought. 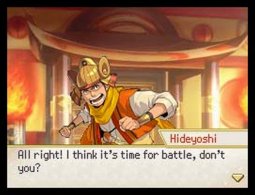 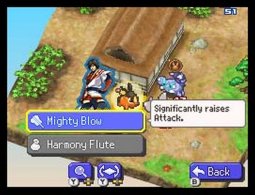 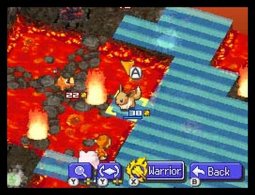 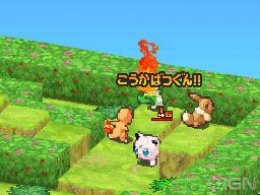 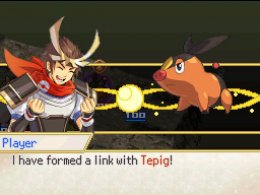 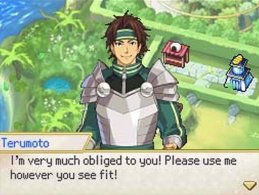 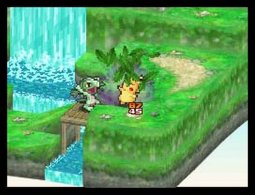 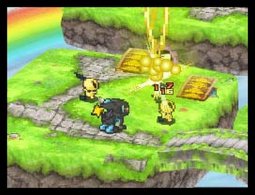 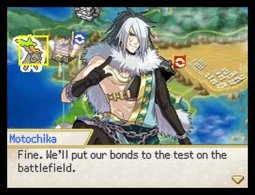 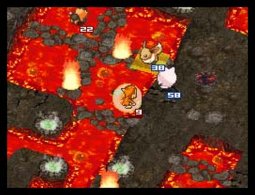 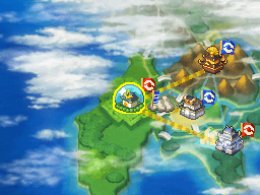