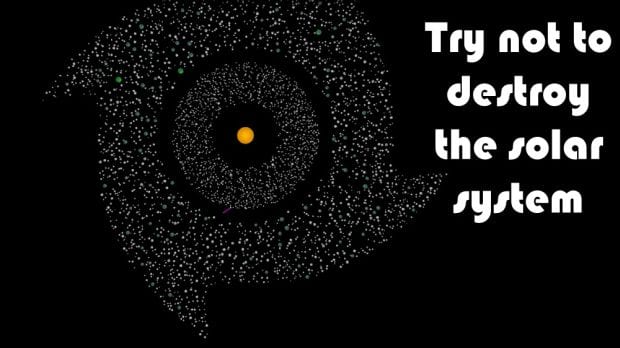 Let me get this point across first: the game is one dollar. That is the amount of money it takes to get twelve fluid ounces of sweet, delicious Dr. Pepper out of the vending machine at work. So when I tell you that the game only took  an hour or so to beat, take that into consideration. The soda lasts me five minutes, tops. Therefore value/time wise I am way ahead on Main Sequence.

This is about as simplistic as you can get in a physics puzzle game. You start off as a small object. If you run into an object that has less mass than you (read: smaller object,  as there is no concept of density in the game) you absorb them. Run into an object with more mass and you are absorbed, game over.

The twist of Main Sequence is that to accelerate you launch a piece of mass outwards.  You stay in motion until affected by the gravity of a larger object, or apply thrust in another direction. It controls like a pseudo-scientifically accurate version of Asteroids.

The goal of the game is to become the largest mass in the solar system. It’s pretty straight forward, and the first level makes it seem that way. None of the other “heavenly bodies”…who am I kidding, they’re balls. None of the other balls are moving, so gaining mass is a cake walk. It’s in the second level where the complexity of the motion mechanic becomes apparent.

In level two, and all the levels after it, the other balls are moving.  The effect of gravity now plays a huge role, as does your mode of locomotion. What I didn’t notice before is that the amount of mass that you eject grows with you, and that can impact the game drastically. If one of the balls is thrown out of orbit and collides with the “sun”, giving it more mass and changing the overall gravity of the level, you can cause a total system collapse. Everything falls into the growing maw, and that’s bad because you want to be the one to consume everything! I wonder if that’s a less than subtle critique on humanity?

Alright, about the “graphics”. They…function. You have a clear understanding of the mass of an object by its size and color. The only real problem is when everything is in synchronous motion but you, it can be disorienting.  Besides that it’s a game full of balls. Main Sequence feels like a very well polished tech demo; we just got to it before the art team did.

What was captured is the sense of scale for a solar system. You can zoom all the way out and see just how tiny you are when you start. You can also see if you have started a astronomical apocalypse. Thankfully the game does have a fun soundtrack. They specifically avoided “space” music and I think that the experience is better for that.

The game play has that perfect level of addictive frustration. It drives you to keep playing even when that slingshot around the “sun” maneuver from Star Trek IV: The Voyage Home doesn’t go as planned.  The motion mechanic also makes you think twice about how you move around the field. Sometimes its better to go with the flow than try to swim upstream. The game creates some very interesting challenges just using the motion and gravity physics. Why bother programming a timer when you can just set another solar system on an impact course with the the player? Sadly there are only ten levels in the game, but even though it’s short Main Sequence is worth the price of admission.

At the end of the day Main Sequence would have felt at home on the Apple IIe. If you enjoy interesting spacial puzzles and can forgive poor graphics, you need to play this. My real hope is that FremontFidelity might earn enough to make a sequel with real art and a ton more levels.

Hell, I would settle for more levels.