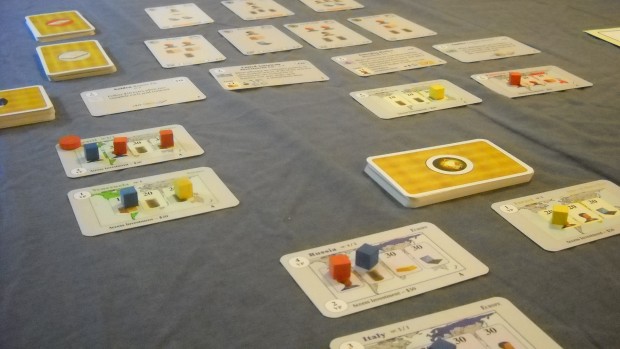 Most people play games to escape from work. Whether that means being a knight, a spaceship captain or an Italian merchant, being something else and making decisions like someone else is the goal. Global Mogul achieves the opposite and brings players into the world of international business with its penny pinching, outsourcing, acquisitions, and market development. For some that might be fun, but for me it is just a return to work.

I received a black set of pieces instead of green pieces, even though there is a green player mat. What I’ve read suggests that this is not uncommon. The cards are rather thin, but luckily don’t have to endure any shuffling after the game is set up. The influence cubes are quite small, smaller than in most other games, and will likely prove frustrating for those with motor control difficulties.

I was disappointed by the rule book. I did not know what was important and what was unimportant, nor what the main activity of the game was. I was overwhelmed by all of the choices without understanding why I would make them.

Unlike the rulebook, I will tell you the goals and main activities of the game right away. Points are primarily acquired from fulfilling contracts, gaining a majority in specific markets, and gaining a majority in the regions. Contracts are a way for you to get cash by turning in certain combinations of resources. To gain the resources you must pay cash to control resource production spots in markets. Markets have from three to five investment spots, each giving you a single resource during the production action. As you can see there is a central circle of resources: markets provides resources, resources fulfill contracts, and contracts generate cash, which can then be used to invest in more markets. The person who controls the most investment spots in a specific market gains victory points at the end of the game. Players also compete for control of regions, which means having the majority control in all of the markets in a region (for example all of the markets in Asia). This also grants victory points. At the end of the game players calculate their victory points from markets and regions they control and add the contracts they completed, along with a few other minor sources of points, to get their final score. Contracts which were not completed count against you.

That is the core of the game, but there are a lot more elements to the game. One valuable mechanic is the venture capitalists. These spots give you cash with only a few downsides. These spots are important because you will need cash to get the cycle of producing and fulfilling contracts going and you will want cash to ramp up your economy faster than your opponents.

Another mechanic in the game that works okay, but can be cut out, are the companies ( which you do remove in the learning game). The companies can be drafted just like contracts, but companies provide a variety of minor efficiencies and a few victory points.

Among the things that I don’t think add much to the game are the fact that contracts come in two types: private and government, with the main difference being whether you can get some initial cash for taking them. There are also two actions that give you an extra cube and $10 or two cubes. I think they could have easily just given players the maximum number of cubes and cut both actions. The last fiddly thing I will mention is the emerging markets mechanic. Emerging markets are the new markets laid out each round and do not produce their first round out. If players invest in an emerging market it becomes an open market and will produce in future rounds. If no player invests in an emerging market then the market goes away. Strategically you find yourself deciding if you want those markets added to the regions you are fighting over. Other players might find that this aspect of the game provides a nice layer of strategy, but in my opinion it adds more complexity than strategy.

Why You Might Like Global Mogul
If you like heavy economic games, this might be a great game for you. It has a tense cycle of resources, which give you money, which let you get more resources. Timing and reading your opponent’s plans are important. I found that this led to too much thinking and long turns which made the game drag. You might like slower more complex games.

There is very little randomness in this game. Nearly all of the contracts, companies, and markets will come out, though when varies from game to game. With repeated plays I expect players will learn what contracts to expect even before they are drawn and what markets to get into in order to fulfill them when they do come out.

Why You Might Not Like Global Mogul
Global Mogul does not really have a hook. I have never had luck giving it a one sentence summary that piqued people’s interest. There is no unique mechanic that might draw players in nor is there anything interesting about the theme. It is a functional but dry game.

The graphics are really quite bland. You’ve been looking at the pictures; the art design is drab, generic, and matches the sterility of the game.

This is a difficult game to grasp your first time. There are a lot of actions that you could take and no single major sources of victory points to tell you what the goal is. Some people will get over the learning curve, but many people won’t.

Who Can You Play With

Unlike many of the games I’ve reviewed lately this game is not family friendly nor good with casual players. The learning curve is steep and there is no theme to keep player’s imaginations engaged. This is a game for a more hardcore gaming group, one that specifically likes economic games.

How Hard is it to Learn

This is a hard game to learn. The rulebook is partially to blame, but the complexity of the game is a major factor too. Much of the challenge though is on the book keeping end, meaning that as long as one player has read the rules, and can explain them well, then everyone should be able to play and have fun. Still expect to go back to the rulebook many times.

Global Mogul is a pretty hefty economics game. The production quality and art are lackluster, and there is nothing to catch the interest of players who don't gravitate to heavy economics games. I think the game is too complex for its own good in several places. I would not agree to play it again knowing how much down time and analysis paralysis will be involved in playing especially given my lack of enjoyment of economic games.