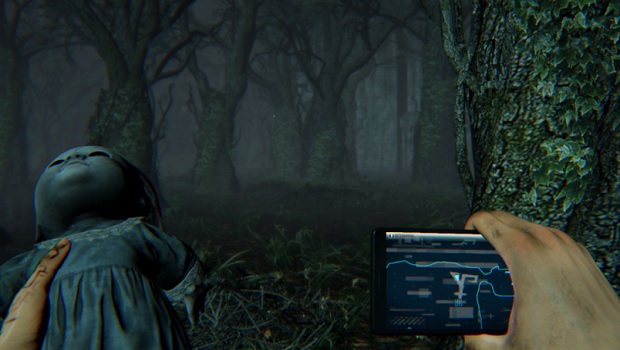 You may have gotten away with it a few years ago, but no one in 2014 has any reason to doubt the potential of indie studios when it comes to making great horror titles. While the execution is sometimes less than stellar, gems like Amnesia: The Dark Descent and more recently, Outlast, have shown that the size of the scare is in no way limited by the size of the studio. The budget-priced title Daylight from the aptly-named indie developer Zombie Studios is another attempt to lend credibility to this phenomenon.

Daylight stars a female protagonist named Sarah who, armed with nothing but her cell phone, wakes up in an abandoned hospital with no recollection of when or how she got there. Soon after coming to, she hears voices urging her to explore the facility in an attempt to uncover its secrets. Progress in the game is primarily based not on where you go, but instead on the “remnants” of the hospital’s past you find there.

As an indie horror title, Daylight will unavoidably be compared to its predecessors, and the hospital setting and notes scattered throughout the game certainly invite this. Horror fans will find some familiar mechanics here, like the glowsticks Sarah relies on for light. While they may at first seem to be an implementation of the traditional “limited light source: please use strategically” trope, they have another use as well.

In addition to letting you see significantly further than your cell phone light (which you can use in a pinch), glowsticks will also highlight your recent footprints to ensure you aren’t retreading previously explored areas and reveal locations where you might find one of the aforementioned remnants. The use of notes in Daylight is less comparable to Amnesia, where they primarily provide backstory, than it is to something like Slender. Here, as in Slender, collecting these hidden files is key to your journey.

Each section of the game requires you to collect a certain number of remnants before you can obtain a sigil that acts as a key to the next area. Additionally, the more remnants you collect, the higher the hospital’s “threat level”, which determines how likely you are to encounter enemies, becomes. In Daylight, as in Amnesia, you are limited in your means to combat enemies; Sarah has no weapon with which to attack the specters of dead hospital patients chasing her.

You can use flares to make them dissipate, but the supply of flares in the game is far more limited than that of glowsticks. Instead, you will primarily rely on the most basic of defensive maneuvers: running away. This is particularly true when carrying a sigil, which prevents you from using flares or glowsticks even if you’re well-stocked. Despite this, the game manages to avoid being a simple extended chase sequence like the Slender series, even if the enemies don’t have Slenderman’s fearsome personality or appearance.

As with any decent horror title, Daylight doesn’t rely on jump scares and hidden enemies to provide all of the fear. Screams and loud bangs are relatively few and far between, while eerily quiet whispers and rustles prevail throughout. The game’s setting and soundtrack create a tense atmosphere that primes you well for being scared witless. Every so often, Sarah fearfully exclaims that she knows someone is there; not long after, a muffled sound will make you wonder if she’s right.

Where the game’s audio is stellar, the graphics are decidedly less so. Although Daylight is the first game to use Unreal Engine 4, I don’t think it makes particularly good use of the new technology. It isn’t a bad looking game by any means, but it’s certainly a far cry from anything revolutionary. For an example of technology that is well used in Daylight, look to the procedurally generated elephant in the room.

From the arrangements of rooms and hallways to the locations of enemies, the levels in the game are randomly generated for each playthrough. This can result in pretty labyrinthine areas, which don’t get much easier to navigate with time. There’s a handy map displayed on your cellphone, although unfortunately it often isn’t big or detailed enough to be of much use. Luckily, the sensation of being lost usually adds to the atmosphere rather than being a source of frustration.

The randomly generated levels might come at a cost to Daylight’s story though; it’s hard to get the message of a book when the pages are in a random order. At the end of the few hours I spent with the game, I felt like I’d learned a little about the mysterious circumstances surrounding the hospital, but not enough to leave me itching for more. Despite discovering the hidden notes and logs being key to your progress in the game, they never quite manage to feel key to the experience. For what it’s worth though, the Daylight experience can still be pretty scary.

All in all, Daylight is a respectable addition to the modern horror lineup that packs enough scare into its roughly three hour playtime to justify its modest $15 price tag. The story and scares don’t quite stack up to the best of its contemporaries, but the title brings enough of its own charm to the table to make it worth a procedurally generated spin or two.