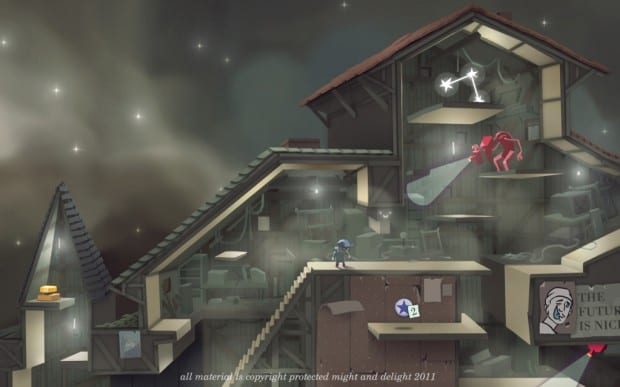 Pid, or “planet in distress,” has players take control of Kurt, a small boy who is stranded on a mysterious planet. In an effort to find their way back home, players are expected to solve a series of increasingly difficult puzzles that involve the manipulation of gravity. Throw in an excellent soundtrack, a few incredible boss fights, and a challenge unparalleled in recent platforming history, and you have a side-scrolling experience that you won’t want to miss.

Pid’s core gameplay has the player using a mystical gravity-controlling gem to solve puzzles, and the addition of other items such as bombs, a slingshot, armor, and many others create intricate puzzles that will require a bit of cleverness to solve. The boss fights in particular require the player to use all of the skill, tools, and intelligence at their disposal to get through the especially-difficult segments of gameplay. Most of the time this makes the game enjoyable, but a good portion of the game is downright evil.

The platforming in Pid is some of the most difficult I can recall, and while most comparable titles will have the player racking their brain for a solution, oftentimes Pid will have players throwing their hands in the air in defeat. This is because more than a few of the puzzles in Pid require the player to possess a pound of skill for every once of cleverness, as many of the puzzles don’t have a smart solution, but rather an improvised longshot that the player will have to try again and again until they make it to the next checkpoint (and let out a great sigh of relief as they do so). That said, an equal portion of Pid’s puzzles have a smart solution, and some of those solutions can take a great deal of thought to solve. In at least one instance, I walked in circles for half an hour before figuring out a solution to what I now understand to be a fairly simple puzzle, but the game is unsympathetic by giving very little direction to the player in a few instances. Don’t get me wrong–the gameplay in Pid is very good, and if you’re an experienced platformer looking for a challenge you’ll find one here, but don’t expect to speed through the game with ease.

The controls in Pid are simple, but only a handful of the buttons are used even though there are tons of items. Switching between the items requires the player to pause the game and enter a menu, which pulls the player out of the game during puzzles and boss fights, which could have been avoided with better (albeit a little more complicated) button mapping. That said, the simplistic controls allow the player the luxury of not thinking about the controls at all during gameplay, which is a nice trait during some of the games more disgustingly difficult segments.

Pid’s presentation, from beginning to end, follows a philosophy of simplicity and curiousness. While the graphics aren’t revolutionary, the look of the game suits itself to a tee, featuring bizarre characters, sleek level-design, and a minimalistic interface. In fact, the player is drawn in before the game has even begun when they see the opening menu of Pid, and find themselves in what already feels like a different world, standing in stark contrast to the cluttered menus we’re used to seeing nowadays. The art style is reminiscent of old-school platforming, but incorporates elements of modern day games, for an impressive visual experience.

Where Pid succeeds visually, it excels in the audio department. The soundtrack has an impressive library, ranging from fast-tempo rock tracks during boss fights, to a slow saxophone jazz during an especially difficult maze level. The sound effects in Pid are simple: characters will make silly sounds while speaking, Kurt’s footsteps echo through corridors, and the glowing power of Kurt’s gravity-controlling artifact hums every time its used, and these small details draw the player into the world. Overall, the sound design of Pid is immaculate, and give the player a reason to turn up the volume.

Pid also offers a collectibles, a co-op mode, and an unlockable hard difficulty that give the player a reason to return to the game. The hard mode will give an even greater challenge for all you misogynists out there, and the co-op mode will divide your gravity-controlling abilities between two players, which makes working as a team necessary to get through the game. I only found two or three of the very well-hidden collectibles in Pid, but discovering them is always a treat.

My time helping Kurt return home was time well-spent, and an experience I would recommend to any fan of the genre. The surprisingly complex story, incredible boss fights, screwy characters, and heart-breaking puzzles will have any player smiling, laughing, and occasionally screaming in frustration. Pid has its shortcomings like its poor use of modern gaming controllers, and unfairly difficult puzzles, but the game’s shortcomings shouldn’t cause players to miss out on the curious and lovingly-created world that Pid offers. For only $10 Pid offers far more content and a more enjoyable experience than many titles available on the marketplace. If you’re a platforming junkie, don’t let Pid pass you by.