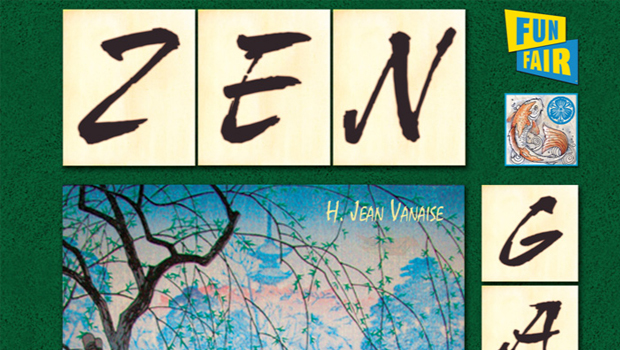 The night is cool. A soft breeze pushes the fragrance of the flowers up into your room. Stepping out onto the balcony, you find yourself looking out over your garden. A garden of subtle pattern, and deep meaning…

Ok, let’s be real: Zen Garden is an abstract game with a thin veil of theme placed, ever so slightly, on top. The game is not made to pull you in to a fantastical world, it is made to exercise your brain. Zen Garden challenges players to build up a garden of different color tiles in different patterns.

The goal of Zen Garden is to get the most points through completing patterns before your opponents. Each player has 12 cubes in their color that are used for both scoring and marking landscape tiles. Once someone has played all of their cubes, the game is over and the score piles are counted to see who won.

The primary component in Zen Garden are the tiles. Each tile has four important bits of information. The side with the art is the landscape side, this will be used to grow and expand the garden. Then the opposite side has a mash up of one pattern shape, one number, one symbol and one color. The patterns are used as scoring opportunities to get points. The number and the symbol are used in playing a cube as a marker. Lastly, the boarder color is there to remind players what is on the other side. None of these things are related to each other, but are all jumbled on to the back of the tile.

On a players turn, they must first play a landscape tile from their hand down to the garden. Then they may take up to two additional actions, in any combination, including repeating an action. Each action uses a tile in some way. The player may place another landscape tile, just as they did at the start of their turn. An action can be discarding a tile to use the number and the symbol on the back of a tile to place a cube. To do this, they must find a ‘section’ of the garden (defined by a set of tiles that are the same color) that contains less than six tiles. The section must either match the symbol, or be of equal size to the number, on the back of the tile being ‘played.’ The third type of action is scoring. The player will discard a tile with a pattern that matches a ‘section’ in the garden where they have a scoring cube. All scoring cubes in that pattern are removed, and points awarded to the player.

Play continues to the next player and so on until a player’s cubes have been scored or placed in the garden.

There are included rules for a simpler tile placing game. It consists of playing tiles to make a single pattern twice. The first player to do this wins.

Zen Garden is full of tiles. The tiles are ok, but may wear after many plays. The cardboard is good weight, but the paper on them seems to be low quality. When punching out I was afraid I was going to damage some of them. The bag that comes with the game is fine, but could easily be upgraded. All of the tiles barely fit inside of the bag, making ‘shuffling’ of the tiles difficult. 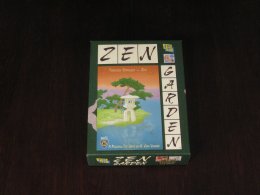 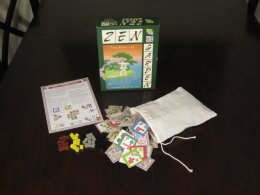 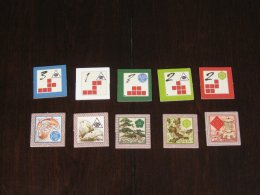 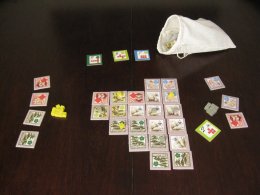 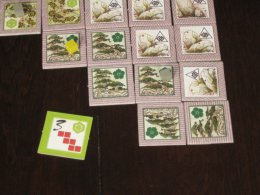 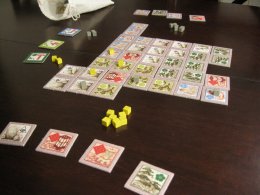 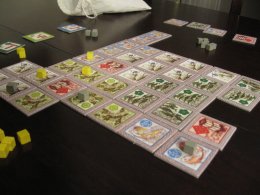 I have mixed feelings as to the art. One side of the tiles works great: the landscape side. There are various little differences that make the tiles interesting to look at; yet, the art work is consistent enough that you immediately understand the state of the garden. The colors look good, and are augmented with icons to help. The flip side is horrible. The ‘back side’ is just a mess of stuff. None of it looks bad, it is just very hard to look at, and very hard to explain.

The rules are a little clunky to explain, but after a play it runs very smooth. The biggest hurdle is what the back sides of the tiles do. Some people (including me when reading the rules) had a hard time understanding how the different bits of information are used. A blue landscape tile may have a white cube placement symbol, along with a ‘3’ and a large Tetris like shape. All of these things are important but have very little context. Again, once the initial speed bump is passed, play is very smooth. Games take about 45 minutes; however, most of that time is spent thinking about what you are going to do. It plays two to four players, with a two player game working a little better.

There is no theme in Zen Garden. At no point will you feel like you are cultivating a garden. At no point is it made clear what the tiles are supposed to represent or why you can only place cubes in some places but not others. Zen Garden does not need theme. The game stands alone without it. It is a little hard to read that, coming from me, but I did enjoy playing the game regardless. Using the mindset that Zen Garden is a abstract game, that the rules and mechanics work as the theme, I could embrace the game play.

The choices are surprisingly open. With every tile being used for three different things, it takes a little bit to figure out a strategy, and then even more to figure out how you are going to do that. Determining the utility of a given tile is the heart of the game. Do you use a tile for its pattern, or do you use if for the landscape? Once you have that down, figuring out how to adapt to what your opponent is doing is just another layer. Couple this with the flexibility of your turn and it makes for a very engaging game.

My favorite aspect of the game is the scoring cube mechanic. It is not inherently obvious (sorry for giving it away!) but the scoring cubes can be played in such a way as to score off of your opponent’s work, or to score your work twice. The hidden information of the back of the tiles allows for some forward/double thinking, almost adding an out-smart-your-opponent aspect to the game.

My biggest gripe is explaining the game and the weirdness of the back of the tiles. One game, someone struggled the whole way through the game. They kept getting the different things mixed up, and were confused as to how to use them. The way the rule book is written does not help. The layout of the back and the rules for using the symbols/numbers are just a little bit beyond being easy to understand.

Zen Garden is a good, but not great, game. I enjoy playing it, but it is not at the top of my list to play. Zen Garden will 'click' with some players, while some people may find it fiddly or overly complicated. The mediocre component quality along with the lackluster art don't give the game any 'come play me!' vibes. If you are looking for a solid abstract strategy, I suggest trying it out before buying it. The first part of that I cannot stress enough: if you get a chance to play Zen Garden, do it!