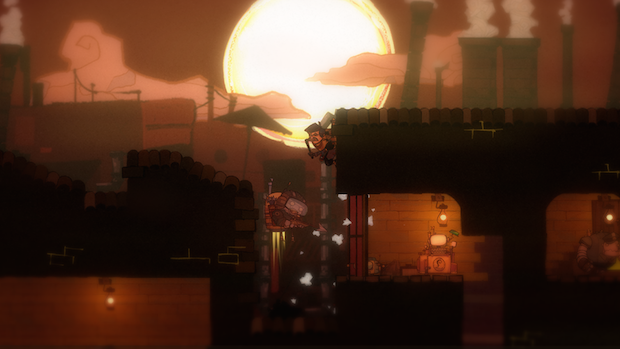 Patience is a virtue that many lack, but it can also be an ethic that gets you further in life. So is the case in the newest PSN title, The Swindle. Created by Dan Marshall and Size Five Games, The Swindle is a “steampunk cybercrime caper,” as made evident by the literal text on the main menu. In it, you have 100 days to infiltrate Scotland Yard and steal the “Basilisk.” The Basilisk is described as something that will throw the United Kingdom into an overly-controlled police state. This infiltration of Scotland Yard can only be done by raking in more and more money, and upgrading whatever character is currently being played. But if you lack that all-important patience, that goal will fall apart.

Before the Basilisk can be captured, you must begin performing heists on less fortunate communities. Of course, you are not robbing the actual citizens, but instead the government institutions populating the area.  As you progress, you can purchase security clearance to perform heists on more wealthy communities, which will net you more money. As you advance through the layers of security clearance, you eventually come to the final heist, which is by far the most difficult of the game. If you do not complete the final level without dying, you must unlock the mission again by accumulating 400,000 more pounds. This is just a hint at the difficulty of The Swindle.

If you find yourself moving too quickly, The Swindle will punish you in a heartbeat. It only takes one shot for your player to die, and that one shot can come from an enemy’s gun, a flying bot, or another host of baddies that want you dead. The Swindle takes inspiration from Spelunky, a similarly frustrating but very rewarding game. Each heist you hop into, no matter which level, will be procedurally generated. This means that enemies, buildings, and computer terminals will all be placed in different areas. This procedural generation can feel a bit unfair, at times, with certain corners of the map being populated with a host of enemies. But on the flip side, you can also draw a location that is rather simple, and only provides a moderate difficulty.

The Swindle has a fairly hefty reliance on precise leaps. If you jump a little too far to the right, an enemy may spot you, setting off the alarm and calling the cops. Once the cops are called, you must escape rather quickly, as eliminating the cops is next to impossible. In the early game, before you are loaded with upgrades, the platforming is very poor. Your small single jump can only take you so far, and having to hop between different blocks of terrain without the backup of a second jump can be unnerving. On top of that, there is an inconsistency with how high you can jump. There are times when a wall is above you and just a bit out of range, but if you jump and angle yourself the right way, the character will grab hold and begin climbing. This happens around fifteen percent of the time, but it is possible, meaning you can find yourself hopping up repeatedly in hopes of catching that one frame of animation that will propel you higher.

Of course, acquiring the jump upgrades will help this tremendously. Unlocking these upgrades will make each successive playthrough a little easier, which can be said for the plethora of unlocks available. Within the player’s hub area, you can find a kiosk station that holds a variety of upgrades for your steampunk-themed anti-hero. These upgrades can do a number of things, and each one makes your life a little easier. Figuring out the most efficient upgrade path for your play style will take at least one 100-day playthrough. Once those 100 days ends, it will be next to impossible to acquire the Basilisk, meaning that another 100 days (or 200 days in my case) will be necessary to complete the game. It takes a while to get used to the technical mechanics The Swindle throws your way, but once you do, the game becomes a bit more manageable. That being said, one wrong move can still kill you in a heartbeat.

Unfortunately, there are a few minor bugs that can plague a heist. There were some instances of my character not landing on a platform properly, and instead sliding off the side. There were also times where hacking a door (equivalent to picking the lock) would not work, and the character would just become stuck for an extra second or so. This may not seem like a big deal but if a guard sees you in that brief time, your heist can quickly go down the drain. These bugs were infrequent, but having them appear can cause serious frustration. If they were to happen on your final mission, serious anger could arise.

The Swindle takes place in the 1800’s, which is evident by peering at any screenshot of the game. Also clear is the fact that the game’s visual design has a strong sense of steampunk style. At this point, the steampunk concept has lost its edge and only provides an excuse for people to roll their eyes. The Swindle does not abide by this rule, however, as their simple, machinery-based visual design works. The graphical concept is executed so well because it integrates into the gameplay perfectly. It feels like the visual design was built off of the actual gameplay, and what would make each mechanic look better. The same can be said for the enemy design, which becomes progressively more intimidating as you take on levels hidden behind the security clearance.

One last thing that deserves a heap of praise is the soundtrack found within The Swindle. Similarly to the visual design, each beat fits the objective of the player. If you are sneaking around, there is slow, pulsating force pumping behind you as you slowly navigate into each room. If a pesky bot has just caught you, a blistering electronic beat bursts out of nowhere to remind you that your ass should be heading for your exit pod. There are more than a few aspects of The Swindle that make it feel like a cohesive adventure, the music is another bullet point on that list.

The Swindle is one of the most difficult games of the past few years. Many other products have tried to recreate the "frustrating but rewarding" concept to no end, with a majority only achieving the former. Thankfully, The Swindle is not one of those games. While it will bring about more than few disheartening deaths, the eventual reward of upgrading your abilities and toppling a previously difficult enemy will outweigh any annoyance. In a world filled with overly difficult titles, The Swindle knows how to blend its mechanics together perfectly to deliver one hell of a rewarding experience.