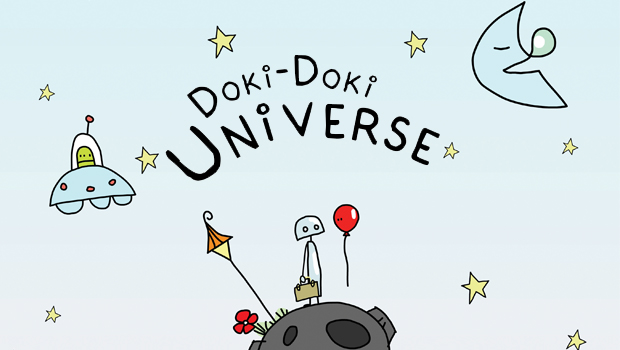 With all this talk about next-gen, face-melting graphics and tremendous leaps in technology, it’s sometimes nice to take a breather and remind yourself of the simpler pleasures in life. Doki-Doki Universe is a new title from indie developer HumaNature Studios that may not have all the excitement and action of hunting down Templars on the high seas, but it does have something that is deeply lacking in most other modern day releases: charm.

The story is about a robot named QT3 (short for QT377665) who is part of an obsolete model line that is being discontinued for its lack of “Humanity.” The robot manufacturers send an alien, Jeff, to test QT3’s ability to understand humanity by evaluating his reactions in different social situations. QT3 flies from planet to planet, solving problems and gaining insight in hopes of understanding humanity and saving himself from the scrap heap.

The whole thing looks like it was drawn by a 3rd grader, which might turn off some gamers hoping to milk their new hardware. But as soon as I saw the HumaNature logo of a giant robot holding up his umbrella for two smaller robots, I completely understood the appeal of the simplistic art style. It captures that rare imaginative innocence that you might find in a Calvin and Hobbes comic or the occasional Wes Anderson film. I won’t say I loved it, but it definitely grew on me after a while.

There’s a lot going on in this title, so much so that it’s almost not fair to just call it a game. Besides the 20 main storyline planets, the two major features are the personality test asteroids and the mail-messaging app. And they’re actually pretty cool features.

Visiting any of the 31 asteroids activates a series of questions that chip away at what makes you tick as a person. They’re fun questions like: “Which of these pictures shows a movie you’d most like to see?” and “What is the cat thinking in this picture?” The more quizzes you take the clearer your personality shines through in your evaluation. I won’t bore you with my results, but after answering over a hundred of these questions, the game was able to describe my personality pretty much on the nose. It sure beats a horoscope anyway.
[singlepic id=17536 w=620 h=350 float=right]
The mail messenger app is a surprisingly fun feature. Using your Facebook login, you can actually send custom emails from the game to all of your online contacts. What’s cool about this is that it allows you use the game’s countless character animations in your messages. So the next time you open your inbox to a screaming cat, a cyborg army, and a guy barfing, you’ll know where it came from.

The cross connectivity is also impressive and worth mentioning. Doki Doki Universe is the first ever cross-buy/cross-save launching on the PSN for the PS4, PS3 and PS Vita. With a single purchase, you can access your game and save using any of these three devices, conceivably starting a game on the subway and finishing it at home. I’m not sure how often this type of technology will come in handy but it’s nice to know it’s there and I hope to see it more in the future.
[singlepic id=17537 w=620 h=350 float=left]
So it has a great story with a charming presentation and cool features that give me psyche evaluations while connecting me to my friends… where could this game go wrong? That’s the thing: the gameplay just isn’t much fun, and it tries the patience with frustrating controls and repetitive mechanics.

Each planet that QT3 visits offers its own separate story that teaches the robot a new lesson on humanity. They’re clever little interactions ranging from turning a groom from a toilet to a human before his wedding to helping an underwater community with a sea monster. He goes about solving these problems using his handy and mysterious conjuring abilities (basically he can make things appear). When you talk to a person who wants to build a wall out of bones, you can make him like you by giving him a skeleton.

It’s a lot like Scribblenauts; except while that game allows you to conjure anything you type out, QT3 can only conjure from his growing inventory of collectable “gifts” that are scattered across the universe, so you’re constantly searching for the right gift for the right job. This might not sound so bad, and at first it isn’t, but after scouring planets for items and talking to every person trying to figure out who wants what, you come to realize that this is essentially just a entire game based on fetch quests.

It also doesn’t help much that the controls are increasingly cumbersome. After gathering over 400 gifts, it becomes very frustrating sifting through them all for the right colored dog to fill a request. It probably doesn’t help that I was playing the game on the PS3, certainly the weakest of the three gaming options due to its lack of touch-activated controls. Doki-Doki Universe is clearly designed with a touch interface in mind, and I imagine selecting items and interacting with characters would be most enjoyable on the PS Vita version or possibly using the PS4’s touch pad.
[singlepic id=17538 w=620 h=350 float=right]
Generally my cup of tea has more explosions than hugs, but I couldn’t help being drawn in by Doki-Doki Universe’s charm and heart-warming art style. The personality tests are uniquely fun and the animated messaging feature is nicely implemented. But at the end of the day, it really comes off feeling more like a cool app than a game. The story mode is repetitive, frustrating and, at around eight hours in total, relatively short. Its heart is in the right place though, and I hope this won’t scare you away from at least giving the free starter pack download a try. While I applaud the attempt at breaking new ground and enjoyed the imaginative presentation, Doki-Doki Universe ultimately misses the mark when it comes to engaging gameplay

While I applaud the attempt at breaking new ground and enjoyed the imaginative presentation, Doki-Doki Universe ultimately misses the mark when it comes to engaging gameplay