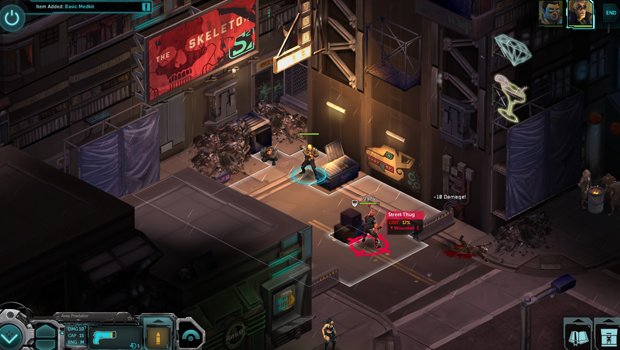 Shadowrun Returns is another incredible Kickstarter success story, a game whose developers asked for 400k in funds and ended up with close to 2 million by the time all was said and done. It’s easy to see why – not only did developer Harebrained Schemes promise a fantastic-looking 2D game reminiscent of the first and second Fallout, but they were offering it up with the fascinating Shadowrun license. If you’re at all a fan of RPGs, it’s hard not to be enticed by that package – a cyberpunk world loaded up with magic and uzis, powerful corporations and duplicitous spirits, all done in beautiful 2D with XCOM-style turn-based combat? Just writing that sentence gets my hand grabbing for my wallet. I’ve had a chance to play the final product on a fourth-generation iPad, and I’ve come away with two major conclusions. First, Shadowrun Returns is a great game, and it deserves to be in the RPG library of anyone looking for a deep game world with a tactical spin on combat. Second, as great as the execution of Harebrained Schemes’ vision may be, this is a title that – at best – makes an awkward fit on the iOS platform.

The first things you’re going to notice when you load up Shadowrun Returns are the character creation options, the sheer scope of which will intimidate an RPG newbie and delight lovers of purposeful complexity – a bit like the Elder Scrolls series in terms of how flexible your options are. You can select your gender, one of five races (human, elf, dwarf, ork and troll), and the option to either select one of six default classes or opt to completely customize your skills and attributes personally. On top of that, you can select a portrait for your character and customize their 3D appearance – hairstyle, beards (for males), and horns (for trolls), along with color options for all three. The stats system is also expansive, allowing you to spend karma (Shadowrun Returns’ version of skill points) on a variety of base stats and specialties. Want to make a hand-to-hand specialist ork who works with a trusty military drone sidekick? Or how about an elf who summons spirit allies and blows apart enemies with a shotgun? Or maybe you just want to dump all your points into a fundamental stat like Body, stomping around in the game with incredible physical bulk and defenses and little else. These are all options available to you. Whether they’re actually viable in the game is another question – but finding that out is part of the fun for more creative players, anyway.

Once you finish customizing your character, you’re thrown into the game world. You start off your adventure as a low-level gun for hire, living in a rundown apartment and wondering where your next paycheck is going to come from. That question is answered when an old associate contacts you from beyond the grave – offering you a chance to pick up a serious chunk of nuyen in exchange for looking into the cause of their own demise. Shadowrun Returns takes place with a 3/4 isometric view – once again, this is pretty reminiscent of Fallout 1 and 2 – and the graphics are very well-polished. A good amount of detail is present in each area, and the whole world teems with the sort of seedy, rundown but high-tech flavor anyone who’s familiar with Shadowrun would expect. The art is largely 2D rather than 3D, with some exceptions (such as the characters you either control or come across). One big surprise is the atmospheric audio. Namely, there wasn’t much of any. That’s a shame, since I’d love to hear just what sort of music Harebrained Schemes would match with these visuals.[singlepic id=16486 w=320 h=240 float=right]

The game itself is as solid as you could hope it to be, and the controls translate decently enough to an iPad – you touch and drag to pan around the map, tap to walk to a given location, tap on the menu buttons that pop up when you want to have a conversation with an NPC, or navigate through your inventory or status screen… very straightforward and intuitive. The turn-based combat is a pleasure as well, and hits all the sweet spots you’d expect – you can duck behind pieces of the environment for cover, use up your turns on actions or movement, and generally do your best to survive the various challenges the game throws at you. As you kill your enemies, pick up loot and navigate your way through conversations, you’ll earn both nuyen and karma – the former of which you can spend on various equipment, while the latter lets you upgrade and add additional skills. The game itself is incredibly solid with an interesting storyline – and you’ll quickly start to notice the options available to you in approaching challenges, depending on how you built your character. While the included campaign offers an estimated twelve hours of fun, more campaigns are being worked on (for a price, of course), and dedicated gamers may well be tempted to give the campaign another go with a fresh character just to see how differently things play out with another skill set.[singlepic id=16490 w=320 h=240 float=left]

While it’s a good game, Shadowrun Returns suffers from one particular problem: it just doesn’t fit terribly well with the iPad experience. I’m not talking about the interface or the gameplay, both of which actually translate beautifully to a touch platform. Instead, I mean the save system. Shadowrun Returns isn’t just old-school in terms of perspective, graphics and gameplay. It also features a save system built around progressing from area to area – and there’s no quicksave option available. This means that picking up your iPad to play this game requires you to be willing to sit down and push your way through the game until it decides to save itself – and whether you die, or the app crashes, or you switch out and power-off your iPad, you’re going to have to start over from the last autosave point. This is easily forgivable on a desktop or laptop, where sitting around for an extended period of time is pretty natural. On the iPad, it’s far less so. Like it or not, the iPad primarily caters to games that don’t force you to devote exclusive attention to a single app for very long – so having a game that requires desktop-like attention is a jarring experience. It’s a shame, because the game is literally a quicksave-system away from improving by leaps and bounds – and I can easily see the reply being that the game was intentionally designed with spaced-out saves in mind. Still, if I was going to choose what platform to play Shadowrun Returns on, I’d choose the PC without hesitation, even with the $19.99 versus $9.99 retail price, and doubly so considering the PC version also opens the door to custom campaign crafting.[singlepic id=16488 w=320 h=240 float=right]

Ultimately, Shadowrun Returns is a great game that does an excellent job of not only drawing players into the Shadowrun world, but doing so while delivering an option-laden, classic RPG experience. But if this truly seems like a title you’d be interested in – especially if you have the interest in possibly creating your own campaigns to share – I’d recommend the Steam version over the iOS version. That gripe aside, it’s an enticing title set in a unique environment, marred primarily by the distinct lack of music.