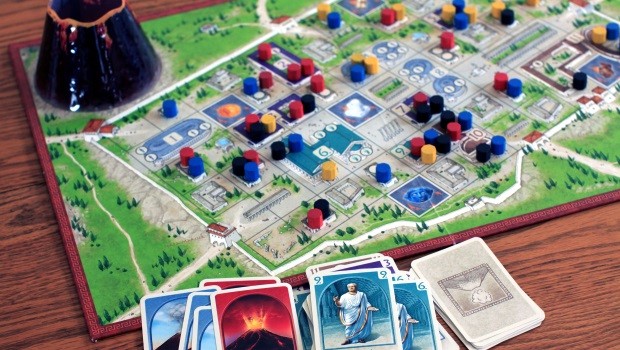 From the designer of Carcassone, Klaus-Jürgen Wrede, comes this meeple-placement/tile-placement game set in the doomed Roman city of Pompeii. At first, you move as many Citizens (and their Relatives) into the city as possible. WHAT COULD POSSIBLY GO WRONG? Sure, Mount Vesuvius may rumble once in a while, but sacrificing a fellow Citizen will surely appease the gods.

I’m so, so sorry. The mountain inevitably spews its glowing hot rivers of death, dooming the population to a smoky, ashen fate. Now your goal is to get as many of your pieces OUT of the city as possible. The player with the most survivors (and in case of a tie, the fewest casualties) wins!

The board is a map of the ancient city, biding its time in the shadow of Mount Vesuvius. Citizens are represented by wooden cylinders. The paint job on the pieces is not consistent. A few pieces were missing, but I asked Mayfair for replacements.

A deck of cards, used in the first half of the game, allows you to move Citizens into the city and react to the rumblings of the volcano. The cards seem a tad thinner than what I am used to.

A cloth bag full of lava tiles represents the oncoming sea of molten rock. The bag pictured in the rulebook looks a little nicer than the one included in the box. The bag is already fraying after only a few plays.

NOTE FOR OWNERS OF THE FIRST EDITION: The 2nd edition of the game includes 3 extra lava tiles (double-sided) and a variant rule that allows you to choose which side to use. I have ONLY played with the variant; finding and removing three tiles from the bag before playing seems like unnecessary work.

The best part is the cone-shaped VOLCANO that devours its victims. They could have simply marked an area on the board for you to place deceased Citizens once they get turned into charcoal briquettes, but it is SO SATISFYING to drop your opponent’s pieces into the fiery mouth of doom, preferably while making “Eeeeeeeeeeeeee!” noises.

The rulebook has a couple flaws: a few detailed points of gameplay are buried within the text. A 1-page rules summary would cut down on mid-game page flipping. Also, the procedure for setting up the deck is not only convoluted, but also ambiguous at one point. A little more clarity would be appreciated.

The life-or-death situation gives the game more urgency than an abstract tile-laying experience would have. Fortunately, the fact that this natural disaster happened in ancient times makes it palatable. I imagine a Hurricane Katrina game would be considered tasteless. Too soon!

The theme of moving Citizens into/out of the city works well enough, as long as you don’t examine the details TOO closely. My friends like to come up with in-game explanations for the mechanics that don’t make logical sense. For example, why is taking an exit out of the city CLOSER to the volcano just as safe as moving further AWAY? Fortunately, little inconsistencies like this don’t diminish the game.

The most interesting element of this game is that it is split into two very different halves, BEFORE and AFTER volcano day.

In the first half, players draw cards and move Citizens into the city’s buildings, as indicated on the cards. After the first rumblings of Mt. Vesuvius, a couple new rules kick in. The “Omen” rule allows you to sacrifice one of your opponents’ pieces to the fire god Vulcan (CONVENIENTLY leaving more room in the city for your own Citizens). The “Relatives” rule allows you to move one or more Relatives into the city along with the Citizen that you would place normally.

After the volcano blows,the cards go away and the lava tiles come into play. You place the tiles to roast your opponents’ Citizens while sparing your own, then move two Citizens towards the exits. To play the game successfully requires mastering TWO COMPLETELY DIFFERENT STRATEGIES, and understanding the relationship between the two. Although there are few rules and they are simple, anticipating how your early-game moves affect the late-game makes THE DOWNFALL OF POMPEII a unique experience.

Cool Move #1: In the first half of the game, you hold four cards in your hand. This allows you to tentatively plan your next three moves. Assuming your plans are not stymied by your opponents, bringing in a TON of Relatives to occupy the safest spots is a delightful way to get the upper hand.

On the flip side, having a superior position at the end of the first phase does NOT put you in a better position once the lava starts flowing. If anything, it makes you a bigger target, especially in multi-player games. This built-in balancing mechanism always seems to bite me; I usually place the most Citizens during the first part, but by the end of the game I always come in DEAD LAST.

Cool Move #2: In the second half of the game, placing lava tiles in such a way as to BLOCK exits from the city, dooming Citizens without actually burning them to a crisp. This is particularly audacious if you write off a few of your own pieces along with your opponents’, and come out ahead anyway.

Meta-game fun: If there are any Doctor Who fans in your group, they will probably try to figure out which pieces represent David Tennant and Catherine Tate. If they entertain any thoughts of PREVENTING the eruption, you can sternly remind them that it is a FIXED POINT IN TIME.

Conclusion: Who should buy this game

Of all the lightweight games I’ve played recently, THE DOWNFALL OF POMPEII provides one of the richest experiences. The sophisticated relationship between the two halves of the game gives this game more strategic density than other games with such simple rules.

A short, simple game like this will never be a main course for a night of gaming, but it is so quick to set up and play, this has become one of my favorite appetizer games. This would also be a good gateway game to get newcomers or youngsters into the hobby. If your group includes any history nerds, they will find THE DOWNFALL OF POMPEII very engaging.