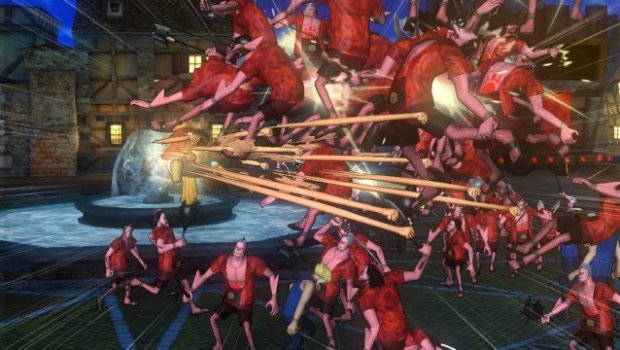 No matter the theme or cast of characters, it’s always great fun to beat up hordes of angry enemies.  That’s a truth that Tecmo Koei is banking on with their licensed beat-em-up title One Piece: Pirate Warriors 2.  While Monkey D. Luffy and his Straw Hat Crew are the perfect set of ragamuffins to control in a riot of enemy fighters, their actions soon go from awesome to tiresome after the thousandth enemy killed and the hundredth pressing of the same three button combo.  Unfortunately for this game, that’s just the first level.

[singlepic id=15945 w=320 h=240 float=left]The game is separated into episodes, with each one providing a short story and a battle.  Battles take place on maps with various paths and doors, some of which start blocked off.  As you traverse the map, you’re faced with large groups of hostiles who you must fight off in order to progress to the next section of the map.  The number of enemies is very high, but their AI is pathetic, causing them to be more like punching bags than true enemies.  While it’s understandable to not have players face hundreds of capable enemies at once, as is the battles are indescribably easy, even on the hardest levels.  Amidst the enemies are various treasure chests which can be opened by hitting them.  They often contain power-ups, like bonus speed or defense, cash, or special coins that can be used to enhance characters.  These coins, often with cute little images on them, are placed into skill slots to raise a certain attribute.  The more a coin is collected, the more power it gives to it’s particular slot.  The money collected doesn’t have much application past completing the game’s gallery, which is simply a collection of artwork, music, and videos from the game.

As you progress, bosses with their own personal hordes will appear at certain sections on the map.  You must find and defeat them, but there are other ways to complete missions, such as reaching a certain section before the enemy or escorting allies out of the line of fire.  None of these are real varied from one to the next, as no matter what the task, the filler will always be punching your way through crowds of hostiles.

[singlepic id=15946 w=320 h=240 float=right]The game starts with the player in control of Monkey D. Luffy and his rubber body abilities, and as you progress through the story, more and more characters become available for play.  Each character comes with their own abilities and wacky powers, but they all are triggered the same way, with three to five button combos in varied order.  At first it is fun to learn how to aim certain combos and special attacks for different characters, it soon becomes a homogenous experience from character to character.  There is no capability to jump and that is very annoying to get used to.  After defeating a certain number of enemies, a gauge fills that allows use of special attacks, each very deadly.  These attacks take a little skill to hit just right, and can be crazy devastating if aimed just right.  In addition, a separate gauge fills that when complete, can be triggered to enter a overpowered mode where all attacks become stronger and a new set of special attacks are available that completely clear large sections of the enemies on screen.

[singlepic id=15947 w=320 h=240 float=left]The game can be played as successive missions in the story mode.  After the defeat of an episode, it’s levels can be played in a free-play mode to see how other characters fare in that level, or to recollect useful coins.  In addition there is a special levels mode that has a few different and challenging maps for players to enjoy.  Lastly, players can take on a map together in an online mode.  None of these are particularly special, but they provide plenty of leveling or practice runs.  The online mode can be fun if teamed with an adequate fighter, but even with a capable mate the experience still feels a lot like playing the game single player.

[singlepic id=15948 w=320 h=240 float=right]The story follows Monkey and his crew as they battle against marines, but it’s hard to tell from the goings on what exactly is happening.  All of the dialogue is in Japanese and subtitled, which is fine in cutscenes but hard to discern while in action.  While many players who are looking just for a gaming experience may not care so much about the story, One Piece fans will be disappointed in the tale’s lack of clarity.  Many of the video cutscenes are well animated, but another half of the cutscenes are simply 2D cutouts with subtitled Japanese.  In this day and age, this is just laziness on the part of the developers.  This is a small failure amidst a fairly nice game graphically.  All of the maps and characters are designed and animated well, and the fighting action looks good and is very clean and functional.  The music is so-so, good enough to not make one rip their hair out, but bland enough to not overpower the situation.

[singlepic id=15949 w=320 h=240 float=left]One Piece: Pirate Warriors 2 is a fun game that slowly loses its luster as the time in-game passes.  While the game looks great and works excellently, the action is not varied or exciting enough to avoid monotony.  For players looking for a Dynasty Warriors style experience, this could provide enough of an experience to satisfy your need, but it will not have much staying power past a fun little autumn title.  This would be merited if this game were priced reasonably, but it’s $50 price tag is ludicrous and simply not worth it.  Aside from the crisp graphics and fluid gameplay, this title is very much like a Nintendo 64 game, from the menus to the battles themselves.  While there is fun and value to be had with this game, there is no redeeming value in the combination of price and innovation.  A game within this overplayed genre needs to be tons of re-playable fun (like Dynasty Warriors) or crazy unique (like the beautiful and overlooked El Shaddai: Ascension of the Metatron.)  This title is neither.  Fans of beat-em-ups and One Piece fanatics aside, the insanely high price and low replay value place this game in the skip over column.