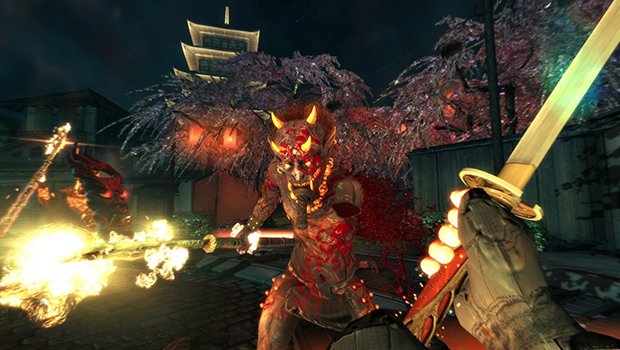 Shadow Warrior! Now there’s a real blast from the past for any experienced PC gamer. Originally released in 1997 by 3D Realms, this was a first-person shooter with a distinctly ‘mysterious world of the orient’ theme going on – and a heavy helping of self-aware humor thrown into the mix. Well, over a decade has passed since its original release, and the team at Flying Wild Hog has decided to give the game a reboot. The result? An explosion-and-gore-filled adrenaline rush, decked out with great graphics, fun weapons, and extremely well-detailed enemies and environments, all with a brand of barbed-wit comedy that hits far more than it misses. If you like subjecting hordes of demons to katana beheadings, uzi-sprayings, shotgun blasts and more – in an environment where just about everything explodes brilliantly if you so much as sneeze on it – then hit Steam and check out Shadow Warrior ASAP.

Shadow Warrior thrusts you into the role of the unfortunately named but incredibly dangerous Lo Wang, a sword-wielding employee of the Zilla Corporation tasked with acquiring a legendary blade from its current owner, whatever it takes. When Lo Wang’s initial multi-million-dollar offer is rudely rebuffed, it doesn’t take long for him to pull out his own sword and start lopping off heads – and if that seems like a dramatically fast transition into violence, well, then you’re getting the idea behind Shadow Warrior. The moment Lo Wang unsheathes his blade, the action is set into motion – and it’s pretty much a start-to-finish exercise in nothing but straight-up indulgent violence, explosions and weapons-acquiring, all set within a 17-chapter story involving gun-toting heavies, magical shadow warriors, and a spunky demonic sidekick trading barbs with the main character at every opportunity. The whole thing is on rails – this isn’t some fancy open-world game where you can explore to your heart’s content. But frankly, despite my love for games that give the player a world to explore at their leisure, I found myself enjoying the whole ‘chapter by chapter’ Shadow Warrior experience.[singlepic id=16368 w=320 h=240 float=right]

One reason the chapter system works is the level design. While some of the usual downsides of this kind of heavily structured gameplay experience show up – invisible walls, far-too-convenient barricades, and bamboo barriers that my sword seems suspiciously incapable of slicing through – Shadow Warrior makes up for it all with absolutely gorgeous, detailed, if typically very dark and moody environments. You’ll navigate your way through asian-styled urban locales and graveyards, to industrial zones and factory interiors, and eventually even the shadow realm home of the various demons you’ll be encountering. Said demons are also gorgeously designed, every one of them created with impressive detail – made even more impressive by the various ways you can slice them apart or blast them to ribbons with your arsenal of terrifyingly designed pistol, uzi, shotgun and more. There are also secrets to find in each level, some of which are pretty clear throwbacks to the original Shadow Warrior title – complete with hidden areas that suddenly transition from the gloriously detailed modern world of gaming to the blocky, pixelated environment of ages long past.

There’s also a decent selection of unlocks to pick up in Shadow Warrior. Of course, you get the nigh-universal FPS upgrade path of additional weapons over the course of the story – starting you off with a simple but effective katana, then later a powerful and entirely threatening-looking pistol… until finally you’re walking around alternating between weapons that include uzis akimbo, the severed head of a demon who can shoot lasers from his face, and more. Most of these weapons can also be upgraded courtesy of the cash you find laying around in the levels, enabling you to fire your pistol more quickly, or more efficiently reload the monstrous-looking shotgun you’ll eventually acquire. While the cash implies that you’d have to go find a shop to purchase these upgrades, that’s thankfully not the case – weapons can be upgraded instantaneously from an in-game menu at any time, with excess cash able to be spent on replenishing your ammo supply. In addition to the weapons unlocks, there’s also karma to spend on skills, and ki crystals to spend on demon powers. These can unlock a wide variety of tiered abilities, granting everything from passive bonuses to Lo Wang’s health, to actions you can use in combat – such as double tapping D and pressing the right mouse to perform a self-heal. The skill system feels fairly novel, and is enough to be exercised without ever interrupting the flow of Shadow Warrior’s often-frantic action.[singlepic id=16366 w=320 h=240 float=left]

The game has a good sense of humor too. Comedy is not an easy thing to pull off, but a good share of the lines in Shadow Warrior had me grinning. Sometimes it was a quip from Lo Wang’s demon assistant. Other times it was just Lo Wang trying for a witty line in the middle of combat. The writing benefits from the characters themselves hardly seeming to take their own predicament too seriously at times – and considering the explosive nature of the Shadow Warrior world, it’s easy to see why. I mean explosive literally – everything from air conditioners to video game kiosks and more are prone to explode if you so much as chuck a shuriken or two at them, to the point where it seems as if nitroglycerin is the preferred power source in the game’s world. Said explosions aren’t just for show or convenience, either – they help you build up more and more impressive combos during the game’s many combat portions, at the end of which you receive a rating (and a bonus to skill-unlocking karma) based on your performance.

There’s a good amount of gameplay meat in Shadow Warrior as well. Not only is the initial campaign pretty long, but there are additional gameplay modes that can be unlocked – promising a more challenging experience to the player, who may be able to coast through large portions of their first play-through using their katana skills alone. Of course there are achievements to unlock and the aforementioned secrets to find as well. Missing, however, is multiplayer – there’s neither deathmatch nor co-op available in Shadow Warrior, making this a wholly single-player FPS game – an increasingly rare occurrence in the modern gaming world. Still, as fun as it would be to laugh at some of the jokes alongside a friend, I didn’t find myself missing such an option. As a wholly single-player title, Shadow Warrior easily succeeds.[singlepic id=16365 w=320 h=240 float=right]

Ultimately, Shadow Warrior delivers on exactly what it set out to do: it provides a reboot to a fun but long-gone title, and in the process presents a game that’s tremendously fun even for people totally unfamiliar with the original it’s based on. It’s hours of mindless, bloody, expletive-filled fun in an action-packed fantasy world illustrated with gorgeous graphics, a good variety of unlocks, and enough challenges to make completionists feel as if they got their money’s worth. You can pick this one up on Steam as of today, and if the prospect of a demon-fueled asian-themed adrenaline rush sounds like a recipe for fun to you, then set aside a few gigs of hard drive space and get ready to get your sword-and-gun-fu on.