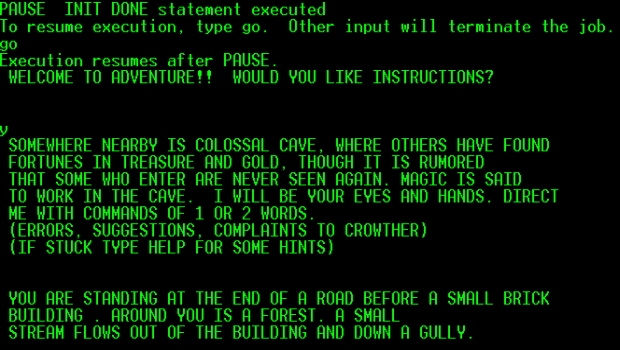 From the present perspective, summiting yet another peak among the vast range of ever-more fantastic achievements in the digital age, I stop and survey the landscape. On the horizon, merely three or four peaks ahead, awaits the Mount Everest of this metaphor: The Matrix. Some of us may live to see it happen – a universe as real as any other, created through the coordinated genius of man and machine. It is the threshold when no more tangible or infinite virtual environment is desired, and within which each individual has the potential to be nothing short of a god.

Then I look into the past, toward lowly foothills at the farther reaches of my memory when I played games with no graphical elements whatsoever. The universe consisted of brief textual descriptions delivered 64 KB at a time. Imagination filled the voids. At the dawn of interactive gaming existed dozens of such early and limited universes, with dense labrynths and complicated puzzles. Among the very first of these text-based adventures was Colossal Cave.

Will Crowther created Colossal Cave in 1976 as a way to reach out to his estranged children. Crowther was a caver, and the game map leverages that knowledge and experience, incorporating terminology like “Bedquilt” and “Y2.” He created secret words – “XYZZY,” “PLUGH” and “PLOVER” – with different in-game effects depending on location, including a “Maze of twisty little passages, all alike.” In 1977, Don Woods, a Stanford grad student, collaborated with Crowther, enhancing the game using Tolkien-inspired fantasy elements.

As the game’s audience expanded, so did its universe, each subsequent iteration increasing the number of map locations, puzzles and treasure combinations. According to Wikipedia, Dave Platt’s 1984 expansion – often referred to as “ADV550” or the “550-point version” for the total number of possible victory points – is perhaps the most famous. Appealing to the imagination, Platt added colorful detail to his environments, like his description of the cyclops, “Dressed in a three-piece suit of worsted-wool…” This special creative character is why Colossal Cave has withstood the test of time, at least for those of us old enough to remember that primeval era of computer gaming.

For everyone else, Colossal Cave has now been converted into a board game by Arthur O’Dwyer. Funded through Kickstarter, O’Dwyer’s rendition smartly uses card abilities with a scaled-down map to capture the spirit of the original computer game. Similar to Magic: The Gathering or Munchkin, where cards are grouped by ability or function, Colossal Cave cards come in 4 varieties: Actions, Reactions, Treasure Items and Non-Treasure Items. Players take one or two cards every turn, but they must also delve into the Colossal Cave to activate their items, accumulate treasure and win the game.

The dynamic that ties the board game back to the computer game is that every Item card lists the specific location where it can be played. Prior to playing items you merely have them in your inventory. Once played, items are considered to be “carried.” This is an important distinction, as card effects will differentiate between items carried or inventoried. Where items can be played corresponds to where you would have found them in the old computer versions.

Game mechanics are straightforward and the brief instructions well organized. Players start at the Well House above the cave entrance. The goal of the game is to return to the Well House with treasures found in the Cave. The number of players determines the number of treasures required to win. On every turn, players first pick a card. Next, a player may choose to move into an adjoining location on the map. As a third action, players must choose whether to pick another card, play a card or move again. Early in the game players will benefit from accumulating cards. There are a limited number of Treasure cards in the deck, and since every Treasure card, as with all Items, must be played in specific map locations, there’s no point to charging blindly into the cave until you know where you want to go.

Some Treasures have flavor text and effects. The Large Gold Nugget, playable in the Hall of Mists, cannot be carried up the Cobble Crawl which leads to the Well House. But if you have the Plugh! magic word you can play the Nugget and then move to the Y2 map location and say the magic word to transport directly back to the Well House! Another complex Treasure is the Golden Chain, playable in the distant Volcano View, but only if you also carry the Iron Keys. Playing the Golden Chain allows you to acquire the Friendly Bear, which lets you take back the Chain should someone play the Action card, Don Woods Never Existed, which forces players to discard every Treasure being carried except for the Rare Coins, Several Diamonds, Precious Jewelry, Large Gold Nugget and Bars of Silver.

I compared Colossal Cave to M:TG and Munchkin earlier, and this is why: whenever an Action card is played a Reaction card may also be played, with each player having the opportunity to play any cards that apply. In this way, players can sabotage each other’s efforts to return to the Well House with treasure.

As an example, Mike had previously played the Persian Rug Treasure card in the Hall of the Mountain King – the fiend! On this turn after his draw, Mike moves to the Hall of Mists and then plays the magic word, Xyzzy! Keith is lost in the Maze of Twisty Passages (All Different), and is annoyed by Mike’s run of good luck, so he plays Good Try to interrupt the use of the magic word. Undeterred, Mike uses the Dwarvish Magazines, which he had been carrying from the Complex Junction map location, to cancel the Good Try. More than a little put off, Keith follows up with I Don’t Know How To Do That, canceling the effect of the Magazines. All four cards are discarded, and Mike’s turn ends in the Hall of Mists. Having just slapped Mike around, caver-style, Keith begins his turn. Without warning, Mike plays the Nasty-Looking Ogre (out of turn) from his inventory. His arsenal spent, Keith can only try to escape the Maze, but Mike has the other half of the one-two punch, preventing Keith from moving using the Angry Dwarf. Unable to flee, Keith can only despair as the Ogre finishes him off. He is forced to discard his hand and any treasures and move his character token back to the Well House. At least he’s out of the Maze… for now.

Colossal Cave is clever and fun in an even-handed way I don’t often see. Not to say players will not occassionally be burned by runs of lackluster draws, but that is the common failure of any such game, and Colossal Cave tries to mitigate by offering players a choice to pick two cards each turn. Luck will definitely have an impact. To minimize lucky Treasure draws I recommend a house rule victory condition that each player must return at least one Treasure from the far side of the map.

Colossal Cave falls somewhere in between dungeon crawl and interactive card game. If you’re tired of Euro games and not in the mood for the intensity or duration of your typical Fantasy Flight offering, Colossal Cave is easy to setup, learn and start playing, and it will appeal to adults and children alike. If you like it as much as I do, I strongly recommend picking up the ADV550 expansion deck, which includes more Treasures, Actions and Secret Words, and three more map locations to explore.

The only significant knock I have against Colossal Cave is the lack of artwork on the cards. I can’t think of a similar card-driven game with as little attention paid to the art on the cards. And while some cards offer flavor text, in general there could be more and it could be more entertaining given the wealth of history behind this game.

Given O’Dwyer’s success with this game, I’d love to see what he could do with another text-based computer game I loved: Zork. It’s not public domain, but the potential to leverage the mechanics of Colossal Cave into the more diverse plot of Zork might be worth the expense of licensing.

Colossal Cave falls somewhere in between dungeon crawl and interactive card game. If you're tired of Euro games and not in the mood for the intensity or duration of your typical Fantasy Flight offering, Colossal Cave is easy to setup, learn and start playing, and it will appeal to adults and children alike.