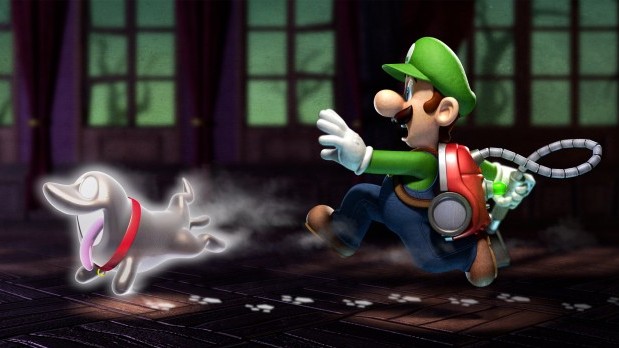 That ghost dog is the bane of my existence.

I’m running around the various stages of Luigi’s Mansion: Dark Moon, trucking forward, thinking I’m about to grab that key, or unlock that door, or whatever. Out of nowhere, this dumb dog comes out from the wall, trips me up, and takes the key I needed to progress to the next part of the mansion. Professor E. Gadd, my back-up back at the lab, comments on this, and teleports me out of the mansion for a brief pep talk.

Words cannot describe my rage, as this is the third freaking time this has happened.

[singlepic id=11437 w=320 h=240 float=left]Luigi’s Mansion: Dark Moon, from Canadian developer Next Level Games (the guys behind the brilliant Punch-Out! reboot, among others), has a lot to prove. It’s a sequel to a game that was largely considered a unique, if lacking, tech demo for the GameCube. It stars Luigi, the gangly, terrified second-string of the Mario Brothers. It’s also a 3DS game announced when the handheld was sorely lacking for some quality first-party content.

Dark Moon does a pretty good job at ensuring its relevance, as it takes what made Luigi’s Mansion great — the Metroidvania-style progression, the puzzle solving, and the “ghost fishing” battles — and gives you more of it. This time, E. Gadd’s forced Luigi into rounding up all the pieces of the Dark Moon in order to bring peace back to the ghosts that haunt the various mansions in the area. It’s paper-thin to be sure, and is mostly just an excuse for Luigi to travel through several well-designed haunts, filled to the brim with puzzles that require exploration and observation, as well as the quick reflexes required to take down the numerous apparitions Luigi will literally trip into along the way.

You’ll still have to shine your flashlight at opportune moments in order to surprise your foes, and suck them into the Poltergust 5000 — a makeshift ghost capturing vacuum — by maneuvering the thumb stick, anticipating their moves and timing button presses to suck them in as efficiently as possible. Luigi is still just as scared of these poltergeists as ever, and still hums along to the theme song in his warbling, scaredy-cat voice. It’s incredibly charming, and Next Level has absolutely nailed the excitement of riding out ghosts like a giant prize marlin while maintaining that “Nintendo-scary” feeling throughout.

[singlepic id=11438 w=320 h=240 float=right]In addition to the more fundamental similarities, you’ll also get the Dark Light Device, an addition to the flashlight that will let you make hidden objects reappear. By combining these three devices, you’ll be able to interact with a huge variety of dressers, tables, paintings, ceiling fans, and countless other objects, looking for hidden phantoms, keys, and coins.

The biggest difference between Dark Moon and its prior incarnation lies in its structure. Instead of being confined to one rather large mansion, you’ll actually explore several different, smaller mansions. While this lends the developers the ability to make some rather unique and varied set-pieces, it also means that you’ll never really get a chance to explore one area for very long. Half the fun of Luigi’s Mansion the first was the constant unlocking of new, previously inaccessible areas. Because the mansions are smaller, you don’t really get that same sense of progression.

[singlepic id=11440 w=320 h=240 float=left]Further exacerbating the problem is the very portable nature of the game. Dark Moon realizes it’s a handheld game, and sets up its mansion structure in mission-based chunks. Rather than just hopping into a mansion and playing through it until you fight the boss, you’ll choose one of several different missions, and once you complete them, Professor E. Gadd will boot you right back out to your headquarters. I can’t even count the number of times I’ve wanted to keep exploring — because there’s a door right there — and yet, nope, gotta go back because Professor Gadd needs to tell me where I can use that key I got from the boss. This constant teleporting in and out, back and forth (while looking really cool), breaks the pacing considerably.

Further still are the times when that dumb dog, or other troublesome ghosts, steal whatever item you got in the previous mission, now making your current objective getting back whatever you lost. It’s frustrating, and it’s clearly padding out the game. While Dark Moon is fun, it could have used a bit of editing to prune the more redundant parts.

Plus, for all of its charm that it carried over from the GameCube game, it managed to leave all of the interesting ghosts behind. Instead of going into the various rooms and trying to coax out one of dozens of unique ghosts into your Poltergust, you’re limited to fighting one of a small handful of different, yet plentiful ghost types. It puts more of an emphasis on the action aspect of the series — forcing you to study the nuances between the different ghosts — over the more adventure-based portions of the previous game, where there were fewer, but more original specters. There are a handful of interesting boss fights, and that’s where some of the most ingenious sections of Dark Moon shine, but that’s the problem — it’s only a handful, while these sorts of things happened all the time in the first Luigi’s Mansion.

[singlepic id=11439 w=320 h=240 float=right]Multiplayer is a rather interesting addition, and I’m glad they decided to put it in. More than a mere throwaway mode, you’ll join up to three other Luigi’s, exploring randomly generated levels in the ScareScraper, scouring each floor for ghosts to suck up. It encourages several different team dynamics; sticking together means you can help your friends out in a pinch, or you can split up, clearing out each level faster by finding the ghosts on your own. It’s incredibly easy to jump into a game, and the various game modes are all rather satisfying. It’s a surprise, really — no one really expected there to be a multiplayer option at all, and yet, it’s a lot of fun.

Luigi’s Mansion: Dark Moon suffers from some rather troubling, though understandable, design choices. By breaking up each mansion into missions, it means that it can be played in smaller ten to twenty minute segments, rather than having to power through it entirely — though doing this sacrifices the exploration elements that made the first game so entrancing. By focusing on a handful of ghosts, it means that the enemy strategies can be properly analyzed and dealt with — but it also means that there are fewer moments that truly stand out.

All of this may sound like I’m harping on Dark Moon — I assure you, I’m not. I just loved Luigi’s Mansion, and hoped that more of it would have found its way into the sequel. It’s still a fantastic game, with a lengthy — if slightly repetitive — campaign, and a surprisingly addictive multiplayer option. Just don’t hold on too tightly to the ghost of the past, as this one’s moved on to a different place.