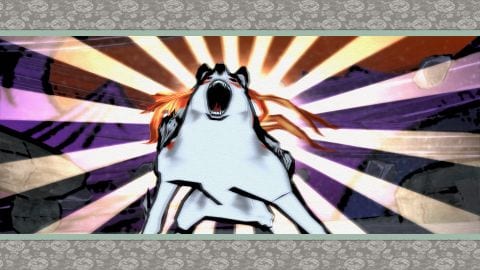 Editors Note: This is a review of Okami HD on the PS3, Gaming Trend originally reviewed Okami on the PS2 way back when it was first released. The game and our review holds up to this day and can easily speak for the greatness of Okami HD. So rather than write two reviews for the same game, this review will take the original Gaming Trend review and add quoted sections that deal with the changes made to the HD version of Okami on the PS3. Enjoy!

When Clover Studios broke off on its own I wondered what the heck could Capcom be thinking? Here was a studio packed with the talent that created great games like Devil May Cry, Resident Evil and Viewtiful Joe, and Capcom was letting them go out on there own! Well lucky for Capcom and for us they’ve contracted Clover for a good amount of titles and one of the first new Clover titles is “Okami”, a highly stylized game based on traditional Japanese mythos and solid “Zelda-style” gameplay. To say that many people were excited to see the almost hand-drawn and cel-shaded graphics would be an understatement. With “Okami” you can tell the developers consciously decided to make something more than a game, and we should all feel a little luckier knowing that developers can get paid to make games like this.

Hands down, one of the biggest attractions in Okami are the graphics. With a fairly detailed and well done cel-shading engine, Clover has created a truly hand-drawn appearance that accompanies everything the game tries to accomplish gameplay-wise.

Okami’s original graphics were truly artwork and the addition of 1080p resolution only helps make the game look even better. I didn’t notice any dramatic improvement to textures or anything like that. But with the cel-shaded style of the game it didn’t really need better textures. The higher resolution does make the game look sharper and in my book that is a good thing.

[singlepic id=10238 w=320 h=240 float=left]You could walk into a museum in Japan, look at some wall scrolls and artwork from early feudal Japan, and you’d get an idea of the art direction for “Okami”. Borrowing heavily from it’s mythology roots the developer choose to make all the characters look as if they had been drawn in feudal Japan and just lifted from these scrolls on to screen. It works real well and looks like it belongs. Windwaker is the only other game I’ve played with such a seamless gameworld and “Okami” does it even better, nothing seems out of place.

Lastly, I can’t get enough of the small details in “Okami”. Trails of fresh grass follow where you run, and the effects from the brush techniques are all very fluid and look great. All the animals in the gameworld look neat and fit into the Japanese landscape. Wisps of smoke, swriling water and even the way the sun shines all contribute to the feeling that graphically this world truly exists and is whole.

The excellent music in “Okami” really sets the tone for the game. The soundtrack has a traditional Asian theme that goes perfectly with the game world. Everything fits in and gives the game world a great feeling. However, one thing that bothered me was the use of mumbles for NPC voices. I’ve never been a big fan of this, even though it was a conscious design decision. I think the writing in Okami is excellent and would have loved to hear them voiced by talented actors. Overall though you can’t find fault with the great soundtrack and music that really feels a part of the whole gameworld.

I hated the mumbling NPCs the first time I played this, and years later I still hate them. They draw you out of an otherwise totally immersive experience. I’m not sure what the people in an ancient Japanese painting would sound like, but I’m sure it’s not the mumblers in Okami. The mumbling is easily the worst part about this game.

[singlepic id=10242 w=320 h=240 float=right] “Okami” controls can be called a mix-bag, but on the whole they’re fairly well executed and it is easy to pull off the majority of techniques. You can can use the R-stick to control the camera and it works great, use it in conjuction with the L2 trigger and you can look around the pretty surroundings. Movement and exploration is generally easy, but I would regularly get frustrated with the wall jump. It’s not always obvious where you can use it or how high you can use it, and if it was a little more clear you could navigate just that much better.

On top of your normal movements are the brush techniques. These are generally done by hitting the R1 button, holding down Square and using the L stick to draw a pattern. Granted most patterns are circles or drawing a line from one point to another, but they work and except for getting a circle just right or in the right location the system works great.

Finally, we come to combat control. Battles are held in separate zones, like bubbles, and you control switches to battle specific commands. You have a standard attack at first, and as you gain new weapons you can assign them to separate a secondary slot. This secondary weapon allows you to do things like guard or shoot beads to knock flying enemies down. As you progress through the game you can learn new combos and attacks that utilize the different weapons. All are easy to pull off and would give even the basic gamer no problems.

The biggest addition to this version is the inclusion of Move controls. I reviewed this game using both a Move and the Navigation Controller. I also used a standard Dual Shock controller. I can tell you the Dual Shock controller is by far the better option. The problem with the Move is that it is just not accurate enough to imitate the paint brush techniques. I found my straight line brushes were horribly wobbly and you could forget about making any sort of complicated brush pattern. So if you were interested in the HD version solely for the Move integration then I would say skip this one entirely.

[singlepic id=10237 w=320 h=240 float=left] To call this game “Zelda-like” wouldn’t be too far off. In fact the basic structure of the gameplay is very similar. You will find yourself exploring, solving puzzles, finding new abilities to solve said puzzles and opening up new areas with dramatic flair.

In “Okami” you are trying to restore a cursed Nippon, and to do this you must use your powers as the god “Amateratsu” to bring life back to the forests, tress and animals. Using the celestrial brush techniques, that you learn as you unlock new areas, you can raise the moon or make the sun shine, cut trees down and blow things apart. All in all there are Thirteen techniques that all contribute to the game. A little more differentiation would’ve been good; generally you just use simple shapes and movements, but the whole system is so well executed it won’t bother even the most scrupulous gamer after a couple of hours playing.

One of the hallmarks of this type of adventure game is the boss battles. On this “Okami” does not fail to deliver. Each boss requires you to figure out their pattern and which brush technique will help you conquer it faster. Usually beating a boss nets you a new item or weapon that comes in hand when fighting the regular enemies. While the boss fights are unforgettable, the normal battles are generally best skipped unless you need more gold or items. Which is a shame because the weapons you get a very cool and fun to use. One can easily blast most of the basic enemies with no troubles and after a couple of them you’ll be happy just skipping them.

On the whole though, the basic gameplay shines through and it is a blast exploring, restoring trees and finding the secrets the game has to offer. The only major knock is that the game will hold your hand a little too much, if you struggle with some of the brush sequences the game will eventually tell you what to do, even if you know but can’t get that circle quite right. If you’ve ever enjoyed playing a Zelda title, but were perhaps tired of the same old story and characters, then “Okami” is the solution.

The other key addition to the HD version is the inclusion of Trophy support. So if you love Trophies then they are here for you. One final thing that this HD remake has going for it is that it’s just $19.99 on the PSN. That’s a great deal for a modern classic.

“Okami” contains hours and hours of things to do. Some of it may seem like stuff to keep you busy, but almost all of it has an impact on the game. You could just plow through the story and ignore a lot of the side stuff and be completely happy. In fact, you’ll probably get a good 20 plus hours out of that. However, if you choose to feed all the animals, collect all the treasures, complete the bestiary and find all the beads you’ll find it very rewarding without being too tedious. A lot of games in this vein tend to drag on because they force you to collect everything, but “Okami” makes it completely optional and completely worth your time and makes the game a lot more fun for it.