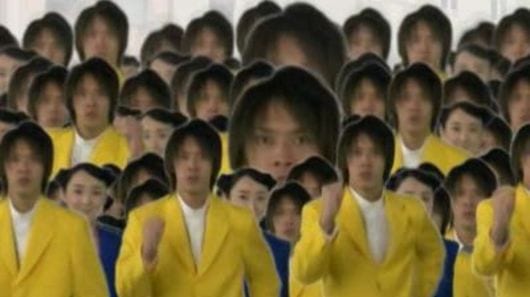 I wish I could be a fly on the wall during one of those video game pitch meetings in Japan. I have to wonder exactly how they came across the idea of Tokyo Crash Mobs. I imagine a few guys sitting around a giant table, staring at a blank white board, then suddenly, one of the guys — who just got finished with a David Lynch and Nobuhiko Obayashi marathon — stands up and says: “Ok, let’s take the puzzle concepts from games like Zuma, and make it weird. Like… really weird.”

Normally I can go for these odd, esoteric Japanese games. Quirkiness and unpredictability have always found a special place in my heart, and I can appreciate a game for just wanting to make something incredibly goofy. What I can’t forgive, however, is when quirkiness takes precedence over gameplay and controls, and ultimately, that’s where Tokyo Crash Mobs falters.

[singlepic id=10314 w=320 h=240 float=left]In Tokyo Crash Mobs, players find themselves solving the respective plights of both Grace and Savannah — two Tokyo urbanites lost in a sea of scenesters. Grace just wants to be one of the first in line whenever a new shop opens up, while Savannah is lost in some strange galaxy… stasis… thing, and people keep pushing buttons, trapping her further within this weird alternate universe. The only thing between these girls and their respective goals are a large group of young, hip, sharply dressed city-dwellers, who will stop at nothing to thwart our heroines. Each level of the story mode is broken up by FMV cutscenes, featuring actual actors doing horrible poses in front of crappy bluescreened backgrounds. It’s all very bizarre, but endearing in a way — like it knows its trying way too hard to be goofy.

Despite its only-in-Japan exterior, its gameplay is actually rather conventional, and anyone who’s played a game of Zuma will instantly recognize the concepts — except, instead of chucking marbles, you’ll be throwing actual people in different colored suits. Lines of scenesters wind their way across each of the maps, often doubling back on themselves, and it’s up to Grace and Savannah to throw additional people into the line to match up three of the same color, causing them to disappear. Additional people will disappear if their suits match after the gap closes, causing chains of combos.

[singlepic id=10316 w=320 h=240 float=right]Because of Grace and Savannah’s respective dilemmas, both will be getting rid of scenesters in different ways. Grace’s levels force her to throw her multi-colored scenesters into the line, so she can be one of the first ten people in the store when it opens; these levels all have strict time limits. Savannah, on the other hand, is trying to prevent lines of marching scenesters from hitting a button by rolling them into place. Each level introduces new obstacles (line-jumpers will increase the distance between Grace and her goal, potted plants will block scenester placement, ninjas can only be removed by matching three scenesters next to it, etc.) or items (UFOs will remove all scenesters of a specific color, barricades will prevent them from moving briefly), and all of the mechanics in the game match the absolutely crazy feeling Tokyo Crash Mobs exudes.

While the puzzle mechanics are sound, the controls are ultimately what hampers a uniquely fun experience. Tokyo Crash Mobs is controlled entirely with the stylus (save for the levels which require moving the 3DS side to side — these levels control just fine, actually), and for a game whose later levels require pitch perfect precision, the stylus allows for anything but. Lines constantly shift, obstacles constantly appear, and the stylus and touchscreen are ill equipped for dealing with the amount of sheer craziness on the screen at any given moment. It would have been nice to at least have the option of using the control stick, but as it stands, any potential Tokyo Crash Mobs might have had is ruined by its strict adherence to a touchscreen-only control scheme.

Tokyo Crash Mobs is probably the strangest game Nintendo has published outside of its own Wario Ware series. It’s so delightfully weird, and its mechanics are a fun, interesting refinement on the Zuma-esque puzzler. It’s too bad, then, that whatever fun that could have been had from this game is mitigated by its asinine touch screen controls. Maybe in that meeting I imagined, they could have figured out a better control scheme before they decided to dress actual people up like ninjas.