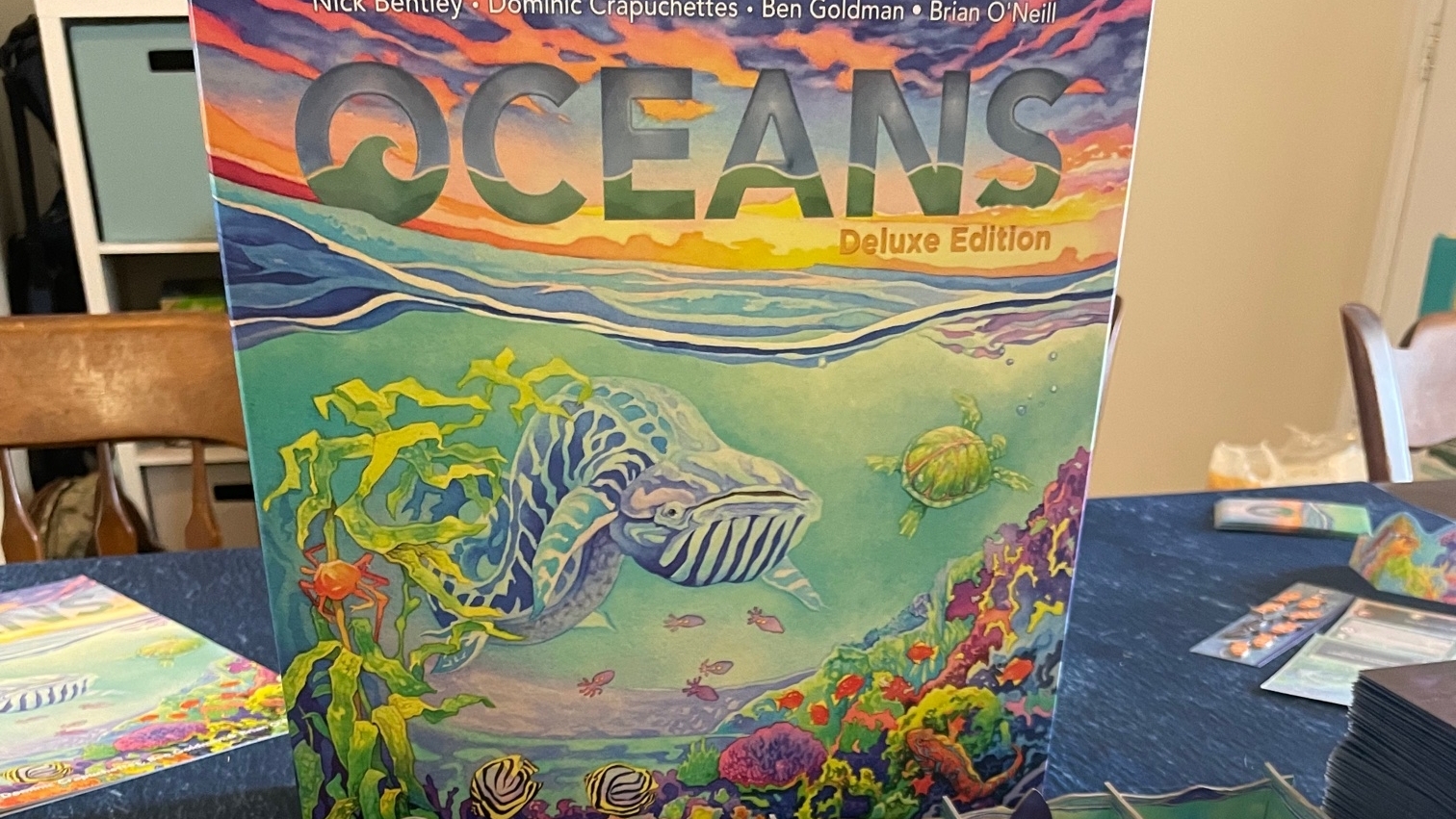 Oceans is the spiritual sequel to Northstar’s hit Evolution series. The Evolution core mechanics of creating quirky creatures, evolving them, and competing for food is still what makes the game run but Oceans takes many of the ideas from Evolution, streamlines them, and moves the theme to the unexplored depths of the oceans and the strange creatures found there.

When you open Oceans for the first time, you are treated to a stack of punchboards with hundreds of charming fish of various colors. After you’ve gotten your fill of colorful cardboard fish, you get to the meat (or fish) of the game. 120 cards consisting of 12 different species traits and an additional 89 Deep mutation cards, all of which are unique, make up the bulk of the game. Additionally, each player gets a screen or bag for hiding their collected fish depending on the version of the game you have. The 3D ocean and reef trays constructed in the middle of the table have a nice table presence and contain the components nicely while playing. 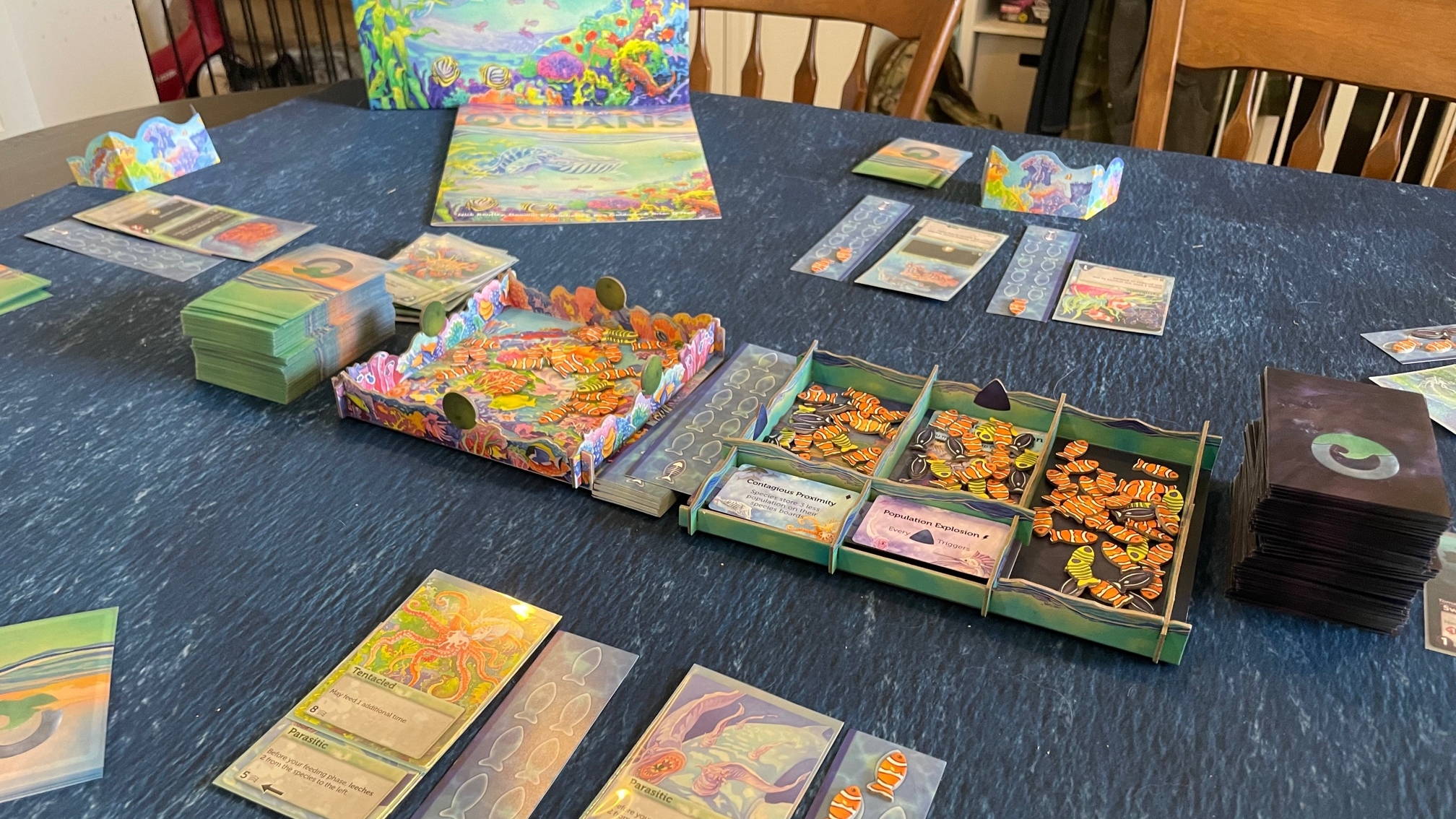 A game of Oceans sees each player creating, evolving, and ageing unique combinations of underwater creatures until the Oceans are literally emptied of food. You can create dangerous predators that feed on other species, symbiotic parasites that benefit from other species growing, massive whales that scoop up handfuls of fish at once, or any combination you can imagine. Toss in some powerful Deep cards and you can create some truly outlandish creatures.

On a player’s turn, they can play 2 (or more depending on modifiers) cards from their hand. They can add to an existing species, modifying it’s abilities, or create an entirely new species. They can also play cards to migrate fish from one section of the reef to another. The player’s species then activate and take fish from their neighbors, from the reef, or from another species of their choosing depending on their abilities. At the end of your turn, your species age by removing fish tokens from their population tracks. The fish you remove are your points at the end of the game. Any species that could not age goes extinct and is removed (discarded). This continues until the reef runs out of fish. At that point, the players count all of their collected fish and whoever has the most is the winner! 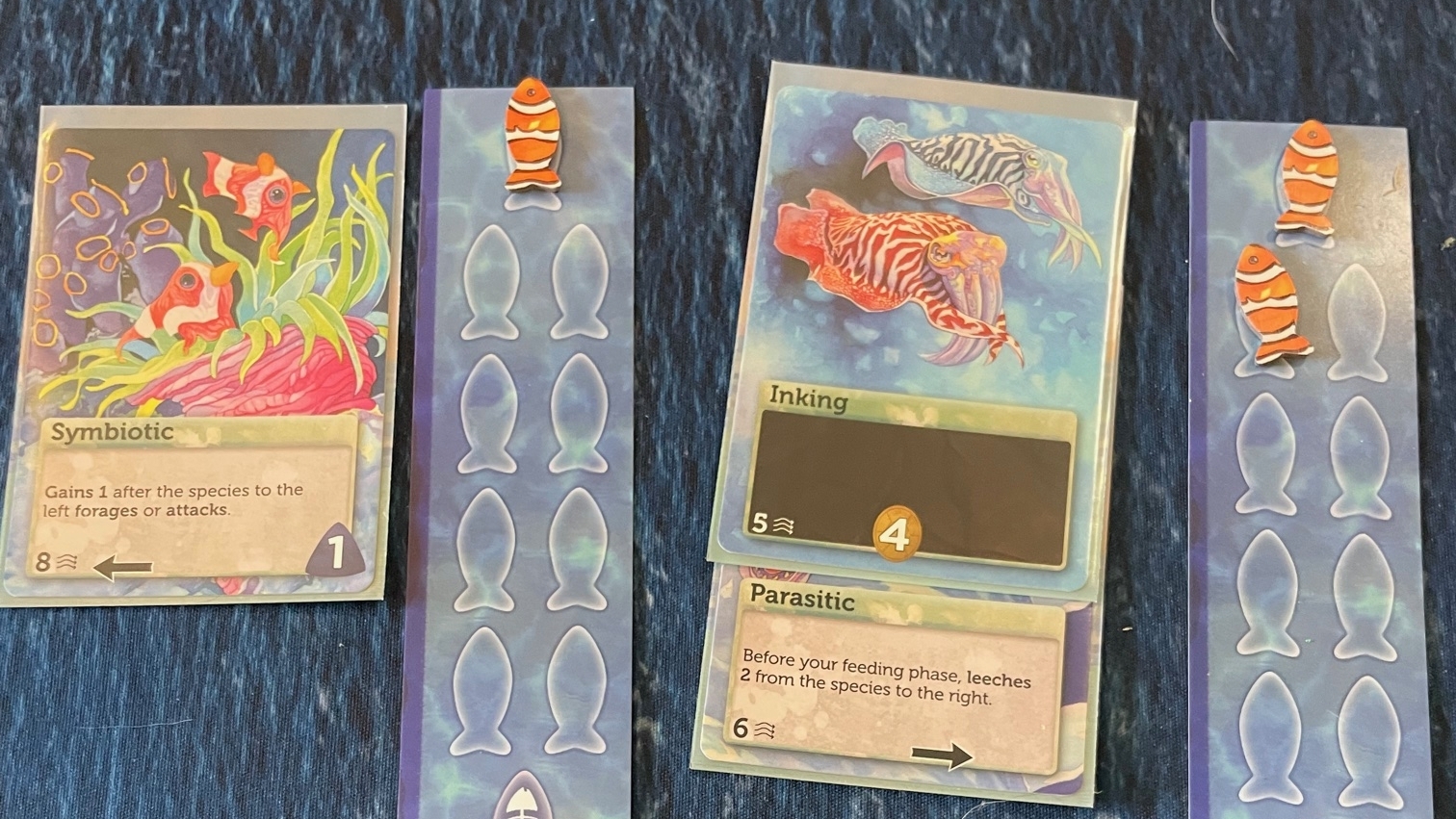 I have really enjoyed my plays of Oceans. The turns are fast and the interaction between the player’s species keeps everyone interested and engaged even on other players’ turns. The 12 different base species provide tons of possibilities for different combinations to build unique species and pursue different play styles. You can go aggressive with predators, create parasites that benefit from stronger neighbors, create fast species that try to score quickly, or highly defensive species that never get taken off the table. Once you introduce the Deep cards, which are all unique, the truly powerful and weird combos emerge. All of these options really give the players room to develop their own strategies and feel clever when they pull off combos. 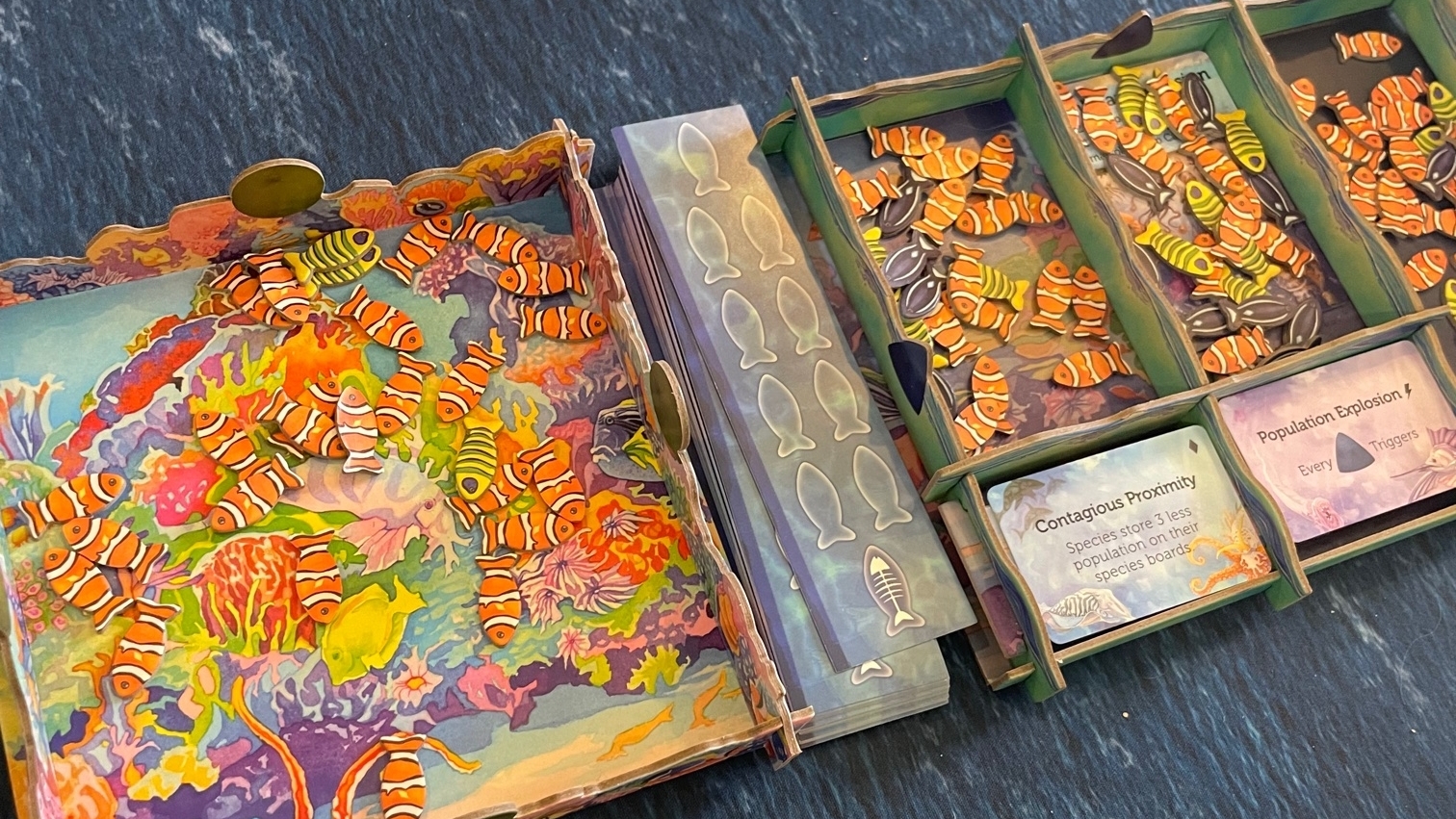 The comparisons to Evolution are obvious and the core mechanics are very much the same. Customize species and “feed” them to score points. Oceans has taken that idea and made it a little more streamlined and friendlier. In Oceans you can always see how many fish are in the reef and even have the ability to manipulate how many fish are in each section so you never have to really worry about not being able to get fish, unlike Evolution where the food added to the pool each round might not be enough for everyone. In Oceans, you age (score) fish at the END of your turn so you always have an opportunity to try and save your species even if another player took all of your fish on their turn. In Evolution, a predator can kill your favorite species and there is nothing you can do about it. Oceans at least gives you a chance to save them. At the end of the day, I enjoy both games. Evolution is a little more random and a little meaner. How much food is going to be available? Will my species survive to be able to eat? Oceans is friendlier and everything you need to know is on the table. If I had to choose one, I’m going with Oceans.

Oceans builds on the Evolution formula and sets itself apart with a theme that everyone can relate to, unique Deep cards that add to the endless possibility of combos, and beautiful components.