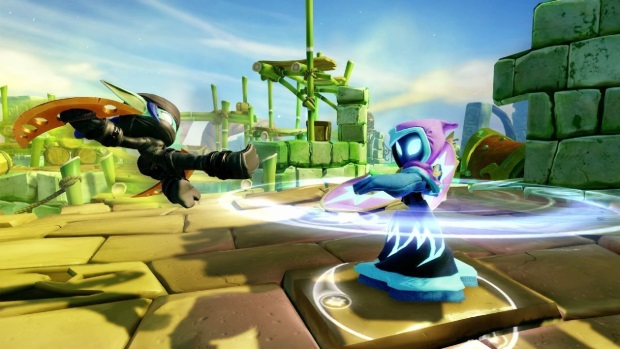 Did you take the plunge into the next-generation consoles with an Xbox One, and are looking to play the market leader in toys-as-peripherals? Skylanders: Swap Force was the first (and currently the only) title on the platform. It’s a game I’ve now spent a fair amount of time with (which includes reviewing it for Xbox 360 and Nintendo 3DS). I was pretty new to the world of Skylanders initially, and if you are too you might want to give our  360 review a read for a crash-course on Activision’s burgeoning toy-fueled empire. Even now Activision hasn’t released every character yet, so if you think Skylanders Swap Force doesn’t have both parents and kids checking store shelves, you underestimate the power they hold. Now that I’ve had time to play the Xbox One version all the way through, there are some some criticisms I’d like to share with you.

[singlepic id=18283 w=620 h=350 float=center]Lets get this out of the way first: Skylanders Swap Force is a fantastic cooperative experience and the character designs, both toy and in-game versions are impressive to say the least. Having purchased some toys from the two previous Skylanders games (Spyro’s Adventure, Giants) Vicarious Visions has me convinced. If you’re looking for the best quality toys Swap Force exceeds both in quality and creativity. The 256 possible combinations of characters on the 16 swappable toys adds a lot to the game, and the other characters are just as compelling. Just as other Skylanders Swap Force platform versions, the Xbox One package comes with the same three characters, USB portal, and is fully compatible with all current and older Skylanders toys.

Aimed squarely at young kids, the plot, controls and interface have a cartoon-like simplicity that appeals to children – including combat and character upgrades. The one feature Skylanders Swap Force on Xbox One was supposed to be better at was the sound and graphical presentation – the rest of the elements should have been brought over with no discernible difference. I don’t doubt that the people over at Vicarious Visions were trying to put their best foot forward with this, but some of the elements stumbled in the Xbox One release.

[singlepic id=18284 w=620 h=350 float=center]The biggest distraction to the game was lip synching during story events. I even went back to the 360 version to compare, and only on the Xbox One are the voices off. I don’t know if this is hardware related or somehow a glitch with the game or a difference in my configuration, but this may be a sore spot for the discerning type. I enjoy the improvements in the audio quality otherwise – the clarity of the surround sound effects and the layered music delivered a consistent presentation.

On the graphics side, the improved fidelity brings the world to life, and I’m happy to say that the game played really well otherwise.  Truth be told, I’m not sure that you’d immediately notice the difference in graphics unless you look for them. The parallax textures certainly make the game crisper and looked like a cartoon brought to life, but without a side-by-side comparison it is easily overlooked. Light transitions, refractions and reflections were also noticeably sharper.

[singlepic id=18285 w=620 h=350 float=center]Controls were spot-on as they were in the 360 review, though I did have several Xbox One profile related issues. I would recommend players exit to the main menu rather than leaving the game paused for extended periods. The profile that is signed in is tied to the controller, and it doesn’t transfer well when the game has been running idle and you go to pick up the wrong controller. The Xbox One will know you’ve moved over, but the game does not and instead says the profile couldn’t be retrieved and kicks you back to the main menu. You can then go back into the game. It would have been better, considering their audience is kids of primary school age, that the game had a more graceful way of handling this.

I experienced no crashes, slowdowns or delays in an entire campaign run-through and challenge and co-op combat levels. The scoring on this review in contrast to the 360 version is not due to any issues with the game, but instead a change in our reviewing policy. If anything, the Xbox One version would have scored higher on the same scale.

[singlepic id=18286 w=620 h=350 float=center]Since the launch date was staggered from the last-gen console versions, I would have liked the upgrade opportunities offered by some publishers this past holiday season to have applied to Skylanders Swap Force – a method by which offered a digital download version for those who were willing to buy it on the last-gen hardware – perhaps even at a discount. Since the portal and toys are transferable, this would have been a slam-dunk – the game is useless without the portal otherwise, and being able to have it on both would give kids (and parents) an opportunity to play Skylanders Swap Force in it’s full HD glory.

If you’re looking to invest in the game and have a choice, leave your older generation system behind - this is the right way to enjoy the entire line of Skylanders Toys you or your kids have amassed. The added improvements in graphics and audio will certainly outweigh any minor annoyances the Xbox One version brings. Be warned: if you already own it on any other console besides the Nintendo 3DS, it might not be worth the duplicate toys that come along with the minor bump in audio and video fidelity. This is where Activision should be looking at releasing a next-gen version with previously unreleased characters to bolster their brand in the next-gen world.