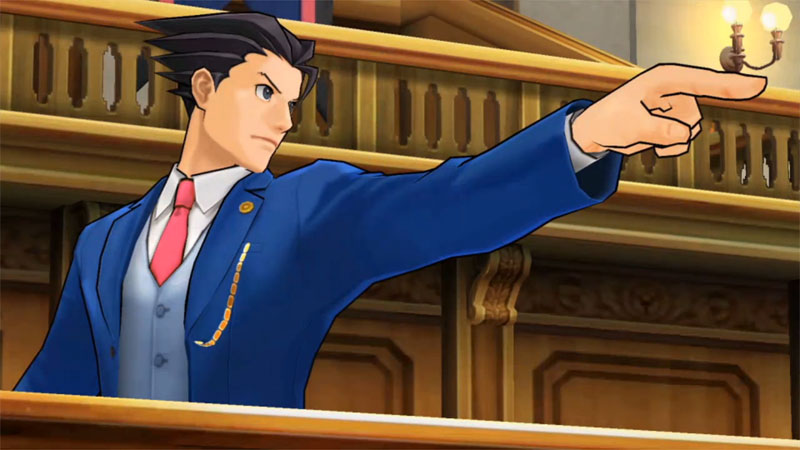 Phoenix Wright: Ace Attorney – Dual Destinies is the fifth game in the series, and more importantly, the debut of the franchise on the 3DS. Every part of Phoenix Wright that players have come to enjoy are accounted for, with a few minute tweaks and improvements. Every bit of the game’s original charm has made it into Dual Destinies with a host of memorable characters, wacky cases, and good, old fashioned legal brawling.

Phoenix Wright is all about due process. You take on the role of several public defendants working for the “Wright Anything” law firm and play a central role in the investigation and legal proceedings of various court cases. It’s a wacky, high-energy game with an anime aesthetic and the courtroom it’s set in is about as tame as The Jerry Springer Show. Prosecutors are snarky, patronizing villains that assault the player with an endless barrage of insults and do just about everything to ensure the player doesn’t have an easy time earning a not guilty verdict for their client, while the judge is juvenile, clueless, and probably the last person who should have the power to imprison someone for life.

The writing is intentionally silly, and while it isn’t hilarious, it has a certain charm that kept me interested in the story and playing. Characters range from robotic madmen, to demonic mayors, and even one particularly ridiculous convicted murderer/samurai prosecutor. It’s all in line with the larger-than-life setting and helps make the dialogue-heavy game a lot more bearable.

Phoenix Wright is a puzzler at heart, and the gameplay is split between doing detective work and defeating your opponents’ arguments in the courtroom. The detective sections include investigating crime scenes, speaking with witnesses/suspects, and slowly unraveling the series of events surrounding the crime. This aspect of the game is where you piece things together and prepare for the ever-nearing courtroom throwdown. Then in the courtroom, the gloves come off as players try disproving the prosecutor’s fallacious arguments using evidence they’ve gathered and by finding holes in testimonies.

At the center of both of these parts of the game, however is character dialogue. This game contains a lot of talking–in fact, it’s ALL talking, so players should bring their reading glasses. For this reason, you’ll spend 95% of your time pressing the A button, or alternatively tapping the “next” box with the stylus. This means that certain sections of the game have the potential of putting the player to sleep, but the writing is good enough to keep patient players at attention, and a good job is done in keeping the player involved throughout. Besides, most of the dialogue holds clues that can be invaluable when trying to solve a case.

Fans of the series will find few surprises, as Dual Destinies doesn’t deviate much from formula, but the biggest addition is rookie-lawyer Athena Sykes, who uses her powers of psychology to reveal the truth during testimonies. The psychology mini-games are fun, but aren’t frequent enough to have any major impact on the game. Aside from these additions, the core game remains the same, which I honestly didn’t have a problem with.

The audio in Dual Destinies follows in the footstep of the gameplay, in that it’s basically what you’d expect from previous titles. The visuals however, are greatly improved as each case begins with an impressive anime cut scene and Capcom has made great use of the 3D technology that the platform offers. Characters pop in front of interesting backdrops, and the animations are unique to each character.

Phoenix Wright: Ace Attorney - Dual Destinies doesn't do much to innovate the series, but does a great job at bringing a classic experience to the 3DS. With nearly 30 hours of puzzling cases and witty dialogue, Phoenix Wright offers an impressive mobile experience to fans that have no doubt been longing for a new title. Despite the occasional tediousness of tapping the a-button, players will enjoy their time with Dual Destinies, which manages to create an experience that leaves little room for "OBJECTION!"