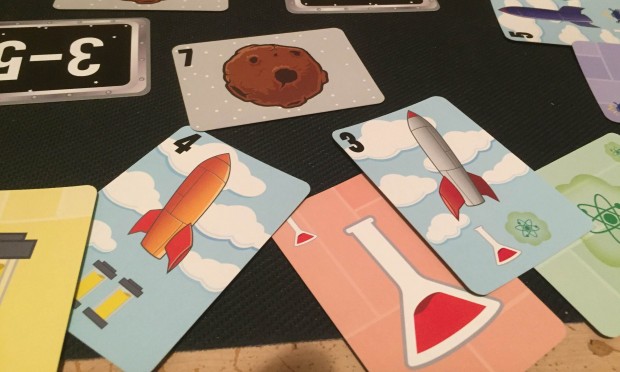 For once the nations of the Earth will work together against the incoming threat. We are being bombarded by meteors. Humanity has but five minutes to blow up all these meteors, needing to coordinate or else face certain doom.

Meteor is a light, five-minute, real-time cooperative game, in which players need to manage their cards in order to destroy all the meteors plummeting towards them. Players will set up a number of meteors depending on the difficulty, and each of these meteors will have a number between one and seven. If playing on the beginner mode, meteors will be played face-up, but players have the option of playing the meteors face-down to increase the challenge. Players will draw cards depending on the number of players and flip the first of five one-minute sand timers. Players will (generally) only draw cards when a timer runs out, and if the players do not destroy all the meteors by the time the last sand timer runs out they lose, and they will invariably play again.

Only the 5-rocket is ready to launch.

However, Meteor offers a whole plethora of optional rules that can make this game more challenging and keep it fresh. For example, players can start with different numbers of meteors. Meteors can be played face-up or face-down, making the chances of overshooting more likely, unless players waste some rockets as scouts, intentionally undershooting. Players can gain build certain technologies that require energy to use and that clog up player draws, but have some fun bonuses. Or, players can simply add any rule that strikes their fancy, a common one being that players cannot talk. However, these rules are all optional, and I will leave them for the players to discover.

Meteor is a simple and fun game. It is quite easy to introduce this game with the light ruleset, and since the game lasts five minutes, players can immediately try new rules to mix it up. This is one of those games that once players pull it out, they will likely play several rounds in a row. This game could have been a really easy game to pull out and rapidly try new rulesets, except the iconography is not clear in this game. The rulebook does not list all of the iconography. My copy of the game came with a printout explaining some of the iconography, but not all of it. So we had to make up the effects of some of the cards. But, to be fair, we all had fun making up what those cards did. So we still were able to quickly plug in new rules.

Meteor is a light, five-minute game, which could be a good thing or a bad thing depending on what you want out of it. Meteor is a filler, and it is a fun filler, but it is just a filler. Do not come to Meteor expecting an epic cooperative game. It is rather a goofy, light romp. However, Meteor is able to pack a surprising amount of cooperative into such a short game. If players don’t work together, players likely won’t be even able to fire a rocket, let alone save the planet. If players spend all their cards too quickly, they will be cursing yourself for being hasty when they have no cards left. Players may become frustrated if their cards run out too quickly, but players will learn to manage their cards. Players will even look each other in disbelief when they make a silly move. So, for a five minute game, Meteor is able to deliver a surprising amount of fun and a massive amount of replayability.

Meteor is above all a goofy, light co-op. If you want a five minute filler, that will almost always merit multiple plays, Meteor is an excellent choice.