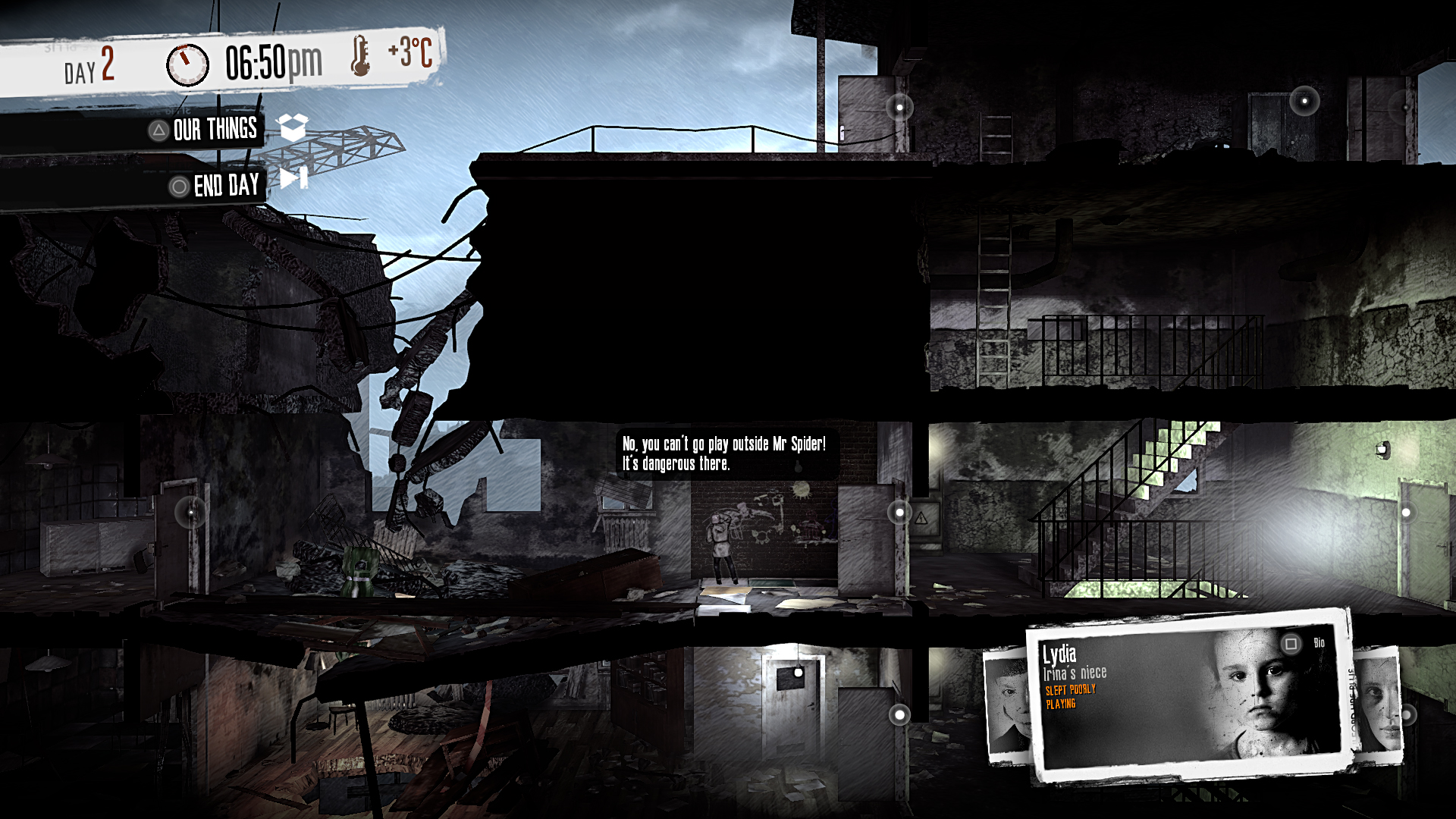 This War of Mine: The Little Ones is a current-gen port of the original 2014 release, but with new missions and…children. It is a gritty look at the hardships civilians must endure during wartime, but the narrative never really comes together. While some of the gameplay mechanics get in the way of progression instead of actually helping your characters to survive.

A survival game with resource management and roguelike elements (permadeath and semi-random generation), the story is set from the perspective of civilians on the frontlines of war. Told through one-off text bubbles and the remains of war-torn letters, you never quite feel the impact of war. There are moments, like when you have to decide whether or not to steal meds from a sickly old woman to survive. But those occasions usually boil down to awkward encounters that left me with little sympathy for the other survivors.

With The Little Ones, some of those civilians are children, who need to be loved and cared for; this adds another layer of complexity to an already complex game. Balancing the survival and well-being of the adults as well as the children is an extremely difficult feat. In order to survive, you must craft, trade, steal, and possibly kill just to make it through the day. With the exception of killing (which I’ll touch on later), all of these components come together in a fun and addictive process of survival.

You start off with three characters and must immediately get to work with helping your characters stay alive. The shelter, or home base, is a grid-like 2D space that is sectioned off into several rooms. Characters can use doors, stairs and ladders to move from room to room while they make improvements to their shelter. Some rooms are blocked by debris, others are under lock and key, left for you to explore at a later time. Finding a new room to open is exciting, and crafting the right item to open it is even more so.Throughout the shelter you can find materials, weapon parts, food, and more items necessary for your survival. Almost every item you come across can be used in the crafting system.

Now, being that The Little Ones is open-ended, you can choose to begin crafting items right away, skip crafting and go scavenging, or even just sit around waiting for all of your characters to slowly die off. If you’re keen on not letting your characters fade into extinction, you can try going the crafting route. To do so, you must build a variety of work tables. Need food? Build a stove. Want weapons and tools? Create a work bench. Cigarettes and medicine (because those are the same)? Make an herbal workshop. Building work tables throughout your shelter and crafting items for you characters to use is the crux of The Little Ones, and easily the most engaging part of the game.

Day by day, characters can become hungry, sick, wounded, tired, sad, etc. and you must stave off the lurking shadow of death by any miniscule means possible. Books and alcohol go a long way in making your characters happy, bandages and meds can mend their various ailments, and newly added toys can help bring joy to the otherwise grueling lives of the children. All of these items can either be crafted at home or scavenged for out in the city.

That is the other side of The Little Ones — scavenging. At night, after all your daily chores are complete (or when the clock strikes 8:00 p.m.), you send one person out into the city to scavenge for supplies. You can go in guns blazing (not recommended) or skulk around in the shadows out of sight from other survivors. Scavenging adds a fun, more action-oriented layer to the base-building aspect you play with during the daytime.

The city map’s locations, and item assortments within them, vary with each playthrough. Abandoned hospitals, bombed-out churches, boarded up houses are just some of the war-torn areas you can make your way through. Even with the various layouts, most of the areas look the same with the washed-out, grey dust of war coating everything. Much like your shelter, some areas will be cut off by debris and/or behind presently-impenetrable entryways. A deluge of items can be found or crafted to help you dig, pick, jimmy, and cut your way in, revealing some of the more lucrative storage areas.

Along with some tools, your scavenger may need to bring along a weapon depending on the threat level of the area. You will run into other survivors while out on your midnight hunts. The areas go from quiet to “caution advised” to “danger”, with the latter harboring the more hostile survivors. Heading into any area other than one that is quiet, it is highly advisable that you bring something to fend off would-be attackers.

The combat in The Little Ones is where the game falters. The mechanics are simple enough: the directional pad toggles in and out of combat mode, left trigger cycles through targets, and your right trigger attacks. The execution of these uncomplicated mechanics is another story. Character movement doesn’t emphasize finesse. A tap in either direction can send your character into a three-step sprint, most of the time overshooting your intended target. I always felt like I was fighting against the controls rather than the enemies.

The other aspect of the combat encounters is how prepared your scavenger is for a fight. This is directly intertwined with the crafting portion of the game. Crafting sufficient weaponry is paramount to winning battles. When your character walks into a “caution advised” area with a shovel and three hostile men armed to the teeth with shotguns, you’re not going to come out of that fight. Period. And despite my best efforts, this, or a similar scenario, occurred during every one of my playthroughs. Each successive try, the number of days I could survive increased, but each of my first combat encounters ended in death, with the rest of my group spiraling down to their demise within the next day or two. Crafting weapons required too many materials. And while balancing keeping your characters well fed, happy, and safe from impending night raids, I found myself consistently behind the curve on the combat front.

Overall, combat took up a very small chunk of the game experience, but it was unavoidable, as far as I could tell, and acted as a sort-of gatekeeper to successfully surviving. It’s a shame that one weak link could break an, otherwise, strong chain, but the game suffers greatly from its inclusion.

This War of Mine: The Little Ones

This War of Mine: The Little Ones is a fun, yet difficult survival game that fans of Don’t Starve, and the like, will most certainly enjoy. It takes a chance in telling the story of war from a rarely seen civilian angle, but ultimately doesn’t deliver an engaging narrative. The addition of children doesn’t add much to the original 2014 release besides a few new items to craft. And the potential for a great and addictive survival experience is hindered by a wonky combat system.

On December 5, 1986, Josh was born into this world pink-faced and squalling. His only thoughts were, "WHAT IS GOING ON? WHO ARE ALL OF THESE PEOPLE? AND WHY THE HELL AM I NAKED?" 19 years later he bought an Xbox 360 and now plays and writes about video games. Life is funny that way.
Related Articles: This War of Mine: The Little Ones
Share
Tweet
Share
Submit