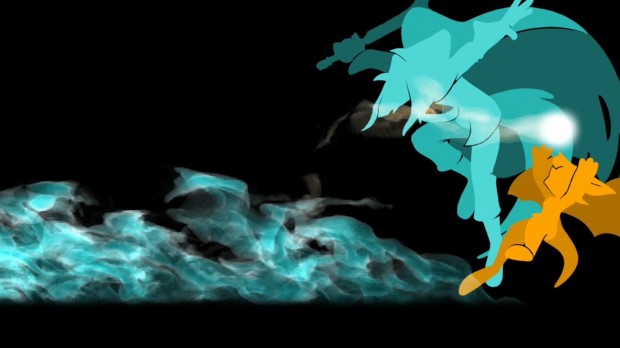 Like nearly everybody else in my age bracket, I grew up watching a ton of Don Bluth movies. The Secret of NIMH, An American Tail, The Land Before Time, All Dogs Go to Heaven, I saw them all, and I loved them.  But I don’t know if anybody loves those 80s animated movies quite much as Dean Dodrill, who clearly put a lot of effort into creating the the next great Bluth film his indie debut, Dust: An Elysian Tail.

[singlepic id=12656 w=320 h=240 float=left]Dodrill clearly appreciated the darker side of Bluth’s movies because this Elysian tale can get pretty grim…at the start, the titular Dust awakens with amnesia and no friends except a talking sword and a tiny flying kangaroo named Fidget. From there it goes on to topics of war, genocide, and redemption. It can be a bit jarring to see such bright, colorful cartoons discussing such horrible acts, but that cognitive dissonance helps the mood by alienating the player. There are even some short cut-scenes, animated solely by Dodrill, to show things outside the game engine.

Visually, Dust is about as good as you could ever expect a one-man game to look. Backgrounds and environments are particularly amazing. Starting off in bright pastoral greens and yellows, environment colors fade to greys and browns as the plot darkens before turning to violent reds and oranges for the final act. Dust moves and attacks like he’s in a Zatoichi film and it’s a blast to watch. That said, with all the colors and flashing lights, the screen can get fairly busy. One later section is so cluttered that it’s nearly impossible to keep track of your character on the screen, leading to a pretty disruptive difficulty spike.

The sound effects and music in Dust are okay but not particularly memorable, but what sets Dust apart is the quality of the voice acting. The writing is good but the voice acting really adds emotion and weight to the game. All of it is well done, but the characters of Fidget, Ginger and a genocidal commander named Gaius are the standouts. Gaius is especially interesting, because his voice is curiously friendly. Listening to his voice you’d assume he was your dad or uncle, not the leader of a genocide. It’s a brilliant forsaking of the conventional megalomaniacal voice we’re used to hearing. It’s because of things like this that I’d really love to see Dust’s storyline expanded into a movie, with more time dedicated to plot and less spent in action.[singlepic id=12655 w=320 h=240 float=right]

Which isn’t to say that the action is bad–on the contrary, it’s excellent. Dust is an agile brawler, attacking quickly and hitting hard. Fidget can also be used to attack, spitting out small magical bullets that–while weak in themselves–can be integrated into Dust’s flurries to powerful effect. By mixing Dust’s sword attacks and Fidget’s magic, the player can rack up some pretty impressive combo streaks—I maxed out at 500. Controls are tight, though you’re  going to want to use a gamepad, as this game was definitely designed for the Xbox Controller.

Dust’s combat may imitate brawlers like Golden Axe or Viewtiful Joe, but its structure is pure Metroid-vania. As you move through the first few levels of the game you’ll find a few different areas you can’t reach until you unlock the skills or tools you need to get the goodies. As you’d expect in a proper Metroid-vania, there are plenty of hidden goodies, ranging from treasure chests to challenge trials to  hidden rooms—even cameos from other XBLA games like Bastion and Super Meat Boy.

[singlepic id=12654 w=320 h=240 float=left]Clocking in at 10 hours or so, Dust is well worth the $15 bucks it’ll run you at full price—but then I’m sure it’ll be on sale if you wait now that it’s on Steam.  It’s a bit rough around the edges but the smooth action, beautiful visual design and engrossing story made Dust a trip to Elysium for me. If Dust had been the work of a small studio, it would have been pretty good.  As the work of essentially a single person, it’s incredible.