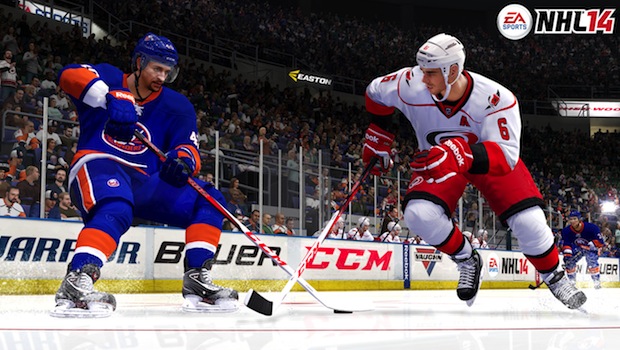 The coolest game on Earth is back for the EA’s newest NHL release, and it packs a punch. Harder hits, dramatic saves, and a more realistic overall game experience comprise this stellar iteration of the series, and although at times it may seem overly similar to last year’s game, the devil is in the details (and the devil equates to an incredible achievement in sports game development). Here’s the lowdown:

[singlepic id=16302 w=320 h=240 float=left]What we have here is a finely nuanced improvement over last year’s edition that will have some fans calling it NHL 13.5, but I think this demarcation sells the development team over at EA Canada short. Only Canadians could have poured this much detail and realism into every aspect of the game, from the various abilities of each individual player, to the overhauled fighting system that makes exemplary use of the all-new Enforcer Engine based on another successful EA franchise, Fight Night. This latter item should be of particular interest, since it takes last year’s awkward first-person haymaker fest (replete with weird visual glitches like overstretched arms) and turns it into a dynamic third-person duel that gives you a much better overview of the action. One drawback of the new fighting system is the frequency with which bouts occur. This results from what at first glance appears to be a very cool innovation: skaters will drop the gloves when a teammate gets leveled with a particularly vicious hit, but there are a lot of vicious hits, and at times the number of fights can crack double digits. While this can be frustrating, you usually don’t have to fight unless you opt in, but other things can spark mandatory rumbles, such as taking a shot on the goalie after the whistle blows (this results in an automatic fight without exception).

[singlepic id=16303 w=320 h=240 float=right]While I don’t want to belabor the point, a lot of people buy NHL games to check out the fighting, and it seems that the developers could have paid a little more attention to the way hockey fights start in the real NHL. If you’re playing as the Penguins, and Sidney Crosby gets boarded, sure, it probably makes sense to rush in and defend his honor, but if Paul Martin gets flattened by a charging forward, that should be viewed as a defenseman doing his job. On the other hand, don’t underestimate the fact that fighting is really fun – you just don’t want to interrupt the flow of the game that many times, which goes hand-in-hand with not wanting to see key players kept off the ice for 5 minutes at a stretch.

Let’s move along to a less controversial aspect of the sport, i.e. where the athletes actually do what they’re paid to do: skate, pass, shoot, and score. The skating mechanics are more finely tuned than in previous years, and there are some key improvements regarding your players’ game sense and responses to important situations. For example, the visual field of your defensemen has widened considerably, mimicking the eyesight of a real person, which allows you to stay with in-rushing forwards far more effectively. Last year, if a forward went too far to one wing while a defender skated backwards down the middle opposite, the defender would essentially ‘lose sight’ of him, then find himself on the forward’s heels after getting easily circumvented.

[singlepic id=16298 w=320 h=240 float=left]Another big addition comes in the form of the ‘one-touch deke’ system. I don’t want to start a constant refrain of ‘last year it was like this, and this year it’s better because,’ but in this case it’s true. Dekes would almost always result in an embarrassing turnover right in the heat of a great rush, whereas now your star players can handle the puck with that true-to-life flair that hockey fans love to see. Spin-o-ramas are easy to pull off with the left trigger, while the one-touch dekes are controlled by holding the left bumper, then manipulating the left stick; the direction of the left stick (combined with good timing) allows the player to show off some impressive maneuvers and rack up some highlight-reel goals. This system proved to be very fluid for the most part, and added a really nice layer of complexity to an already multi-faceted gameplay experience. It also made shootouts more interesting, breakaways more lucrative, and so on.

In terms of game modes in NHL 14, there’s a lot to love here. You’ve got the highly touted NHL 94 Anniversary Mode, which upon first glance doesn’t seem too far-removed from regular gameplay (other than the famous and semi-gimmicky blue ice surface). But, once you give it a few tries, it can actually be pretty fun. There’s an emphasis on almost comically heavy hits, slapshots that you spend 10 full seconds winding up for, and red and blue stars to indicate what player you’re currently controlling. Again, the whole thing is fairly gimmicky, but I’m glad they included it as a small nod to how far the series has come over 20+ years of constant development. It’s actually pretty amazing when you think about it, given how insanely life-like the whole experience has become.

[singlepic id=16300 w=320 h=240 float=right]Another brand new mode comes under the title of ‘Live the Life,’ which allows you to do the eponymous activity with a pro of your creation. This great concept has become a staple of most sports games in this day and age. Play your player’s shifts as they come in real time, and build up your reputation through your performance on-ice while controlling only your skater (Pro tip: don’t be a goalie). There were a couple drawbacks with Live the Life, including one seriously annoying bug that plagued me on a number of occasions: if your player receives a penalty, your next shift is supposed to start the second your penalty ends and you come flying out of the sin bin to join the rush, right? Wrong. The bug causes you to get stuck in the penalty box, and simming to your next shift instead takes you to the very end of the period, while you’re still in the box. It doesn’t even resolve itself when the period ends, either – come back out for the second or third period and you’ll still be in the box (likely screaming for help because you’re trapped in a glass case of emotion). The penalty ends as it should, but you can’t get out. This usually means if you get a penalty, the rest of the game will be a wash for your pro, which is pretty frustrating if you were having a great game right before the infraction. Hopefully an update will fix that soon; in the meantime, my guy has to be quite the gentleman.

[singlepic id=16301 w=320 h=240 float=left]Finishing up with the game modes, GM Connected also stands out, which allows you to create a team and select from dozens of online leagues to compete in, with each person controlling one NHL team. I think for straight-up dramatic brilliance the online versus play gets the award. When you play someone online in a sports game, you have to mentally brace for a serious challenge – human opponents are so much smarter than the built-in A.I. that it’s not even funny, and you’ll find yourself having to strategize more than ever before if you want to avoid getting dominated (this is true even of ranked matches against players of lower skill levels). Even the worst player is going to be 1000 times smarter and more creative than the computer, which is what makes it so ridiculously fun. Losses are heartbreaking, victories triumphant, all because you’re playing against a real person. It’s just that simple.

[singlepic id=16299 w=320 h=240 float=right]This is not totally to disparage the A.I. that EA has programmed into this bad boy – it’s not that bad, just not very imaginative. A pair of defensemen skate backwards and stare at you when you forecheck, and the same three-man rush comes right back toward your goal every time. It can be tough to win at the higher difficulties, but this usually results in lowered settings to make it harder to trip up your opponent, rather than the other team having better strategies. Regardless, it’s hard not to have fun when you’re playing NHL 14, and it’ll be a long time before you get sick of this one. EA has definitely kept the golden reputation of the franchise unblemished, and it’ll be hard to find many players who become disappointed with the release. Again, there will be plenty of critics who complain that it’s too similar to NHL 13 to be considered much of a sequel, which can easily be refuted in two ways: a) there are tons of differences that lie just below the surface that make the game that much greater, even if you don’t immediately realize it, and b) they really don’t have too much room for improvement, because NHL 13 was amazing too. I would agree with the critics about some things like opening animations being identical. I could say the same thing about the menu screens, but then again, there’s a brand new soundtrack full of some great rock n’ roll, and that’s basically the same as having new menu screens.

Speaking of the sound design, it was thorough, though not overly impressive. The commentators (Bill Clement and Gary Thorne) have a bunch of recycled lines, and Most people are probably a bit sick of their voices at this point, but it seems clear that they locked down those roles with a tasty contract a while ago. The music, as I mentioned, fits the mood well, and seems to have a higher number of different songs than last year, which obviously makes for a very welcome boost in variety. The hits, shots, and pad-on-pad collisions all sound great, especially with a good subwoofer. That’s really all there is to say about it, but it forms a pretty key part of the overall product, without the thoughtfulness of which the game would feel kind of flimsy. At any rate, if you have any interest in hockey games whatsoever, then you probably already own this, but if you don’t, go out and get a copy – you’ll have an absolute blast.