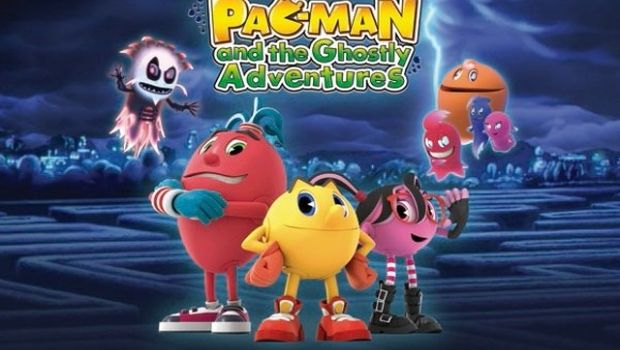 Everything must evolve to survive, a fact particularly true about the video game industry. Over the years we’ve seen the iconic virtual vanguards of our gaming youth bizarrely (and at times shamelessly) re-imagined in an attempt to stay relevant. Sometimes gold is struck and we see our old heroes resurrected to cry with the devils and tomb-raid again, but mostly we get Golden Axe: Beast Rider.

That said, it’s understandable for even the most casual of game players to be dubious when it comes to modernizing the Pac-Man, especially when it involves him growing a face. But if given a chance, and an old-school dose of video gaming patience, Pac-Man and the Ghostly Adventures might chomp itself a place in your portable gaming collection.

While it becomes reasonably clear early on, Pac-Man and the Ghostly adventures isn’t an typical reboot/remake. It’s actually connected to the new Japanese/Canadian/U.S. Disney animated series which started in June of this year. In this surprisingly developed narrative, our hero ‘Pac’ is actually descended of the original Pac-Man, who in this universe was a great hero and saved the citizens of “Pac-World” from an ancient ghostly threat millennia ago. At some point, Pac apparently wrestled the shoes off an unconscious Sonic the Hedgehog (still drinking away the memories of Sonic 2006), and became the pariah of his local high school, where his simple wits and veracious, lunch-stealing appetite has lost him more friends than it’s earned. However, when the evil spirits of Pac’s dimension attack, his unique ability to devour and thusly disembody them gets him recruited by a secret Pac-World spec-ops group to fend off the threat, et cetera, et cetera…

Even though Ghostly Adventures takes place very much in the midst of this pre-established story, it never takes itself quite seriously enough to feel jarring. Despite the dialogue-bubbled cut scenes and self-referential plot elements, Ghostly Adventures delivers its ankle deep narrative very much in the way of the old-school games its clearly drawn inspiration from. These things are happening just because they’re happening, and looking for more reason than that is missing the point. This is a ‘set-up’, not Lord of the Rings, and frankly, despite my narrative-heavy gaming preferences, I was okay with that.

Broken into several selectable stages, Pac sorties ala Mega Man to each location to cannibalistically cleanse it of its ghostly denizens. To that end, this game hits all the right notes of a competent platformer. From intermittent boss battles to creative enemy patterns which, with experience, can be taken advantage of, Ghostly Adventures is doing a lot of things right. Pac’s primary dash-and-devour attack can be used to elevate him to different locations by targeting enemies along certain paths, chaining high-scores together in the process. While I found the controls a little sloppy for such a precise tactic and the penalties for mistakes a bit daunting at first (in many cases one chance at that certain ledge or hidden cavern is all you will get) it never felt impossible, reflecting a solid balance in design. In addition to his wraith-slaying mouth of a body, Pac can transform himself into different physical modes, each have certain properties (again, a la Mega Man) which will allow him to tackle the challenges of each dungeon in a different way. Each of these powers can only be activated for a limited time, and only a certain number of each can be held. This adds another dimension to gameplay, where you need to make the choice of using each stages special form to its full potential there, or saving it to conquer another location in a more unique way.

Still, as entertaining as all of this may be, it’s not particularly memorable. No matter how many ghosts I had Pac suck down (which, to be honest at times seemed a little horrifying), or clever ways I bested a pitfall, Ghostly Adventures never managed to find that certain something start-n-stop games like this need. There was no sense of addiction or curiosity that made me want to pick the game up again once my 3DS was flipped closed and resting on my coffee table. Sure, there would be a time when I may look over and wonder what was atop that ledge I hadn’t reached before, but then it would just turn out to be another puzzle piece to a picture I wasn’t very interested in to start with, and Pac would be put back to rest with the stage still hanging in its undefeated limbo.

As a matter of fact, without the unintended comparison to the wonderful indie game by the same name, limbo is good way to describe Pac-Man and the Ghostly Adventures. Truly neither great nor bad, Ghostly Adventures is a exceptional example of mediocrity. I could say one of the biggest things this game has going for it is that I didn’t regret playing it, which isn’t really an experience people want to pay for. Despite all of these points, it’s important to remember that this game is a tie-in, more akin to Naruto in its gaming DNA than say, Pokemon. While people unfamiliar with the animated series can still enjoy it, it’s not really made with them in mind, and maybe that’s where the x-factor I was hoping looking fell through the cracks. Sure, those may have been expectations that I brought with me, but I think the act of using Pac-Man, in whatever incarnation, sets those expectations in itself. The fact I came away from it not getting what I hoped for but still not being disappointed I consider a victory, even if it’s a modest one.

While Pac-Man and the Ghostly Adventures doesn’t overreach the way that many reboots and recalibrations of old characters normally do, it still misses that arcade sweet-spot. If released at a lower price point this game would be a brilliant stocking-stuffer for the holidays, but if you’re not a fan of the animated series or some sort of Pac-Man-ophile, your money can probably find a more rewarding mouth to feed.