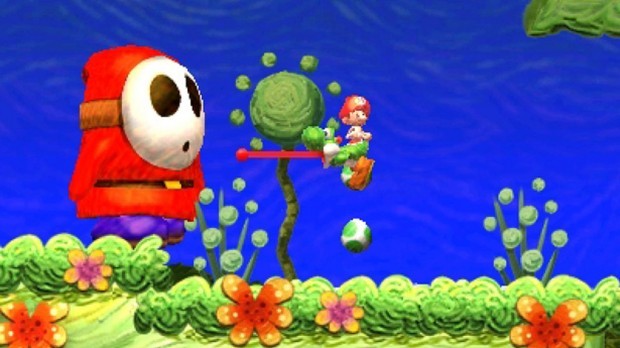 Super Mario Worlds 2: Yoshi’s Island has been called one of the best platformers of all time, and with good reason. It combined an unforgettable art style and a surprisingly sophisticated game design to create one of the most unique experiences of its generation. But that was 1995, and in nearly two decades the series has seen only a single direct sequel in 2006 called Yoshi’s Island DS. Yoshi’s New Island brings the series to Nintendo’s current portable powerhouse, making full use of the 3D capabilities.

Yoshi’s New Island starts feeling familiar even in its opening sequence. The stork carrying Baby Mario and Baby Luigi takes the children to the wrong parents, and is then ambushed by Kamek, who kidnaps Baby Luigi. Baby Mario falls into the forest where he reunites with the various Yoshi creatures, who help him rescue Baby Luigi. That’s really all the story you get and, considering the story of most Mario-Universe games, really all you should have expected.

What follows are 40+ stages of side-scrolling adventures that also feel very familiar. The unique, hand-drawn art style from the original Yoshi’s Island returns with most of its charm intact, and the mechanics remain mostly the same.  Variously-colored Yoshi characters must flutter jump, throw eggs, gobble enemies, and gather all of the collectibles scattered from level-to-level. The whole experience is very familiar save for a few new mechanics like being able to eat huge enemies, which grant you enormous eggs that tend to break everything, and being able to freeze enemies with your breath, which help break up the monotony. The boss fights are also memorable (it doesn’t get much more memorable than fighting a giant angry bean) and the 3D animation works well with the classic art style.

Less impressive are the added Yoshi transformations, where you use tilt-based gameplay to navigate Yoshi as a jackhammer, hot air balloon, or submarine. These sections are short time trials and simple minigames that offer a change of pace, but aren’t very interesting or fun and didn’t really add anything for me.

Yoshi’s New Island is a very solid platformer, and although none of the levels were difficult to get through, getting through each level with all of the collectibles is a different story altogether. I never got every collectible item in a stage more than a few times, so I don’t know if there is any incentive or unlockable involved in doing so, but even without one I felt compelled to try collecting them all.

One of the few fresh ideas that this title included is the addition of six multiplayer minigames, which have players team up with a second Yoshi to compete in some way. These include competing to pop the most balloons or eat the most enemies. These were simply not very enjoyable, mostly because the game scores both players as a team and doesn’t tell you who won. Perhaps I’m misinterpreting the competitive nature and they’re simply meant to be a combined effort, in which case I fail to see why anyone would care to see how many balloons they could pop as a team in 90 seconds.

Yoshi’s New Island’s biggest flaw, however is that it fails to live up to the name that there is anything new about this title. It borrows on a proven style, recognizable characters, and a mastery of platforming that Nintendo is known for, but there simply is nothing that makes this game stand out. The gameplay is still fun and challenging, but aside from a few very minor tweaks it’s essentially the same game that I played when I was six years old. That’s not a bad thing by any means, but it raises the question “Did they need to make a sequel?” In some ways, being the same is good, because the original is still good. But I always tend to err on the side of fresh experiences in a series, and there a few to be found here.

Yoshi’s New Island looks great, plays flawlessly, and is entertaining and challenging enough for any fan to enjoy—and ultimately, that’s all that matters. If you’re a fan, you’ll find what you’re looking for here, but those still waiting for the next great and unique Nintendo title will have to keep on waiting. Some of the pieces of the game feel poorly tacked-on, but at it’s core Yoshi’s New Island is a worthy sequel to a beloved series that has been out of gamer’s lives for too long.