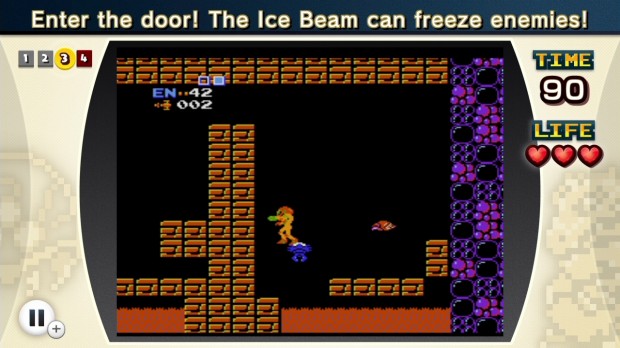 Remember that part in Metroid where you had to climb the shaft using the freeze beam? Unless you’ve played it recently, you really don’t remember the difficulty. Remember how Pit in Kid Icarus seemed to slide like his shoes were made of ice cubes? Yea, I think we all remember that. Like its predecessor from December of last year, NES Remix II is pure nostalgia wrapped in a package made of puzzles and challenges that’ll put a smile on your face and reinforce that games today are just ridiculously easy.

NES Remix II didn’t fix anything that wasn’t broken in terms of presentation or progression with the previous iteration. As before you’ll tackle classic games from the NES library, unlocking the coveted Remix levels. These nibbles of nostalgia span ten of the best games ever offered on the platform including Kid Icarus, Metroid, Super Mario Bros. 2, Kirby’s Adventure, Dr. Mario, Super Mario Bros: The Lost Levels, Zelda II: The Adventure of Link, Punch-Out, Super Mario Bros. 3, and Wario’s Woods. Compared to its predecessor, this is a vastly improved game offering.

The stages in each of the ten games mentioned above grant you from one to three stars based on a combination of lives lost, speed, and whether or not you completed the level without taking damage. The stages start out relatively short and very easy. For instance, in the Metroid first stage you’ll be asked to simply walk left, grab the Maru Mari (that’s Morph Ball for those who played later releases) and then make it to the first blue door on the right using that form. Do it quickly and you’ll earn three stars. Do it perfectly and you might get a nice rainbow glow on your stars to signify that you really nailed this section. The stars add up, unlocking the next stage for that game, as well as the next remix level roughly every five earned stars. It’s those Remix levels that really make things interesting.

The roughly 150 or so stages across the 10 included games aren’t the highlight of the game, though they are fun for the most part. The real lure of NES Remix II are the 40 unlockable Remix stages. These can be the original Mario Bros, but with two Marios and nothing but spikey shells walking around, picking a Kirby out of a claw machine (so…much…hate for that level!), or Toad squaring off against Octoroks in a Zelda level. There are a few really odd (and kinda funny) objectives in some of the stages. You’ll watch Kirby’s intro showing you all of the little puffball’s skills and how to unleash them. You’ll also check out the intro to Wario’s Woods where you literally sit and just observe. Rounding things out, you’ll put on your sweatpants to watch Lil Mac and Doc Louis from Punch-Out’s training montage.

There is one problem that persists from the previous title. When you fail a level you can Continue or End. Hitting continue ensures that you cannot receive more than one star for the level, so the only real choice is to hit end and try it again. It’s an arbitrary a penalty as it was five months ago. Maybe it’ll get removed in NES Remix III?

Continuing the (now extended it seems) Year of Luigi, also included in NES Remix II is Super Luigi Bros. It is the full original Super Mario Bros., only you play as Luigi…and the whole game is played from right to left. That’s right, the whole thing is backwards. This mirror image is actually a little more difficult than I would have expected as I have the bulk of this game baked in my DNA at this point. It’s fun to run it backwards, and I can appreciate the full product inclusion.

Another option is a great throwback to the NES-fueled past – the NES World Championships Remix. Using Super Mario Bros, Super Mario Bros. 3, and Dr. Mario, you vye to set the highest score possible to then post it to the Miiverse. I was never able to get it to post to the Miiverse due to some error (115-5111, as if that’s helpful), but the idea of a 1990-style NES World Championship (sans Fred Savage) is pretty awesome. Now if only I could get a shiny (and very expensive) gold cartridge as a prize!

If you visit the old woman in Zelda II, she was always pretty helpful. Well now she’s your guide to the Nintendo eShop, peddling the full versions of the ten games seen here. It’s a nice shortcut once you’ve had your bite-sized nostalgia fun, though clearly they are using a full ROM of the game as evidenced by the framerate issues in Metroid, just as it was when we played these games as kids – nostalgia preserved.

NES Remix 2 reminds us of the challenges of our youth. With bite size nibbles of the most challenging or salient aspects of what made these games great, NES Remix 2 also delivers more iconic and well-recognized games from the library that made Nintendo famous. Ice Climbers takes a back seat to the far superior Metroid, and Kid Icarus replaces Balloon Fight, and Zelda II: The Adventures of Link makes Wrecking Crew look silly. A far superior installment in this series, NES Remix 2 improves on it’s predecessor in every way.