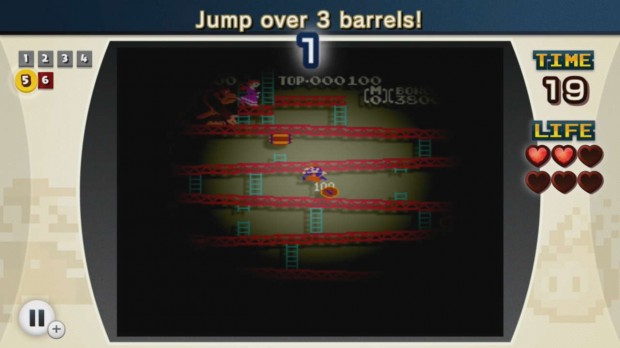 NES Remix is what Nintendo does best: it gives us new ways to experience the classics. Challenging, charming, and waxing nostalgic, we get to play through Nintendo’s storied history on the NES platform. From enduring franchises Donkey Kong to favorites like Excitebike, prepare to “Play with power” like never before.

There are six titles that make up the challenge stages of NES Remix. Donkey Kong, Donkey Kong Jr. Mario Bros., Excitebike, Balloon Fight, and of course Super Mario Bros. Each of these stages offers up what essentially amounts to a ‘training phase’ for the real challenge to come – the Remix. For instance, Stage 1 of Excitebike is four quick how-tos on acceleration, as well as avoiding obstacles, riders, and mud. Nail all of these in the allotted time (and it’s hard not to, at least at first) and you’ll earn three stars, as well as a bevy of Bits that you’ll use to unlock stamps for the Miiverse. If you fail the stage and continue from the middle of the set of levels and you can only earn one star. Completing the stage opens the next one, but the stars are used for unlocking the Remix levels, and that’s what you’ve really come here to play.

The Remix levels remind me very much of hacked ROMs. For instance, in Remix I you’ll play Super Mario Bros., only Mario is always invincible and you are charged with taking out 15 enemies to complete the stage. Easy! Stage 2 has you playing the arcade classic Donkey Kong, only almost survival horror style as you can only see a small circle around Mario, obscuring any chance of seeing incoming barrels or fire until it’s almost too late. Stage 3 is where the real challenge begins locking Mario in a full-out run towards the finish on stage 2-3 with you only in control of where he jumps. Stage 4 is classic Mario Bros, only you have two synchronized Marios to use for collecting coins in a very short amount of time. It only gets stranger from here as you progress through the 54 Remix and Bonus levels, but I’m not one to ruin the surprise.

When it comes to the Remix levels, even if you grew up playing these titles you’ve likely forgotten just how difficult they can be. Remember how much you hated the ice level? It’s back with a vengeance. What about playing 1-1 where all you have is a shadow version of the background? Try a lap in Excitebike in the dark with only the bike’s headlamp.

Like most of Nintendo’s minigame-based titles, the levels here are short and to the point. Some can be cleared under 10 seconds, and some will ask you to play an entire level from the original game. The time limits given to you in the non-Remix levels are pretty forgiving, encouraging you to strive for those three stars to unlock more Remix levels. It’s a good blend of challenge versus reward, though there is an arbitrary element introduced here – the continue.

We are all very familiar with the Game Over screen offering us the chance to Continue or End. As it is classic NES it makes a return here, but it’s rather pointless. Sure, if you are on a longer stage with four substages you might select it, but with the chance to only earn one star there is no point in doing anything other than restarting the whole level. You’ll end up doing it later to shore up your star count anyway. Since it also doesn’t matter whether you succeed on your first life or third, it just makes it even more pointless.

I was surprised to see that NES Remix doesn’t support multiplayer. Nearly every single one of these titles supported more than one player in their heyday, so I was saddened to see it missing here. Sure you could track progress against your friends with the Bits and stars you earn, but that seems like a decidedly manual process.

I have mentioned the challenge in this title a few times and with good reason. Go dig out your NES and perform whatever arcane ritual needed to hook it up to a modern television. Pop in any of these classic titles and come back to me with a report on what passed for controls back then. Nostalgia covers a lot of sin, and all of that is brought back to life in NES Remix. Floaty controls for Mario, controller-snappingly aggravating mechanics in Ice Climbers, and the pure awful that is Urban Champion will remind you that the challenge wasn’t always fair. Don’t expect mercy in NES Remix either.

The only other wart on this product is the rather arbitrary decision to force the player to use the Wii U tablet. The game unfortunately does not support the Pro Controller. While the controls work well on the tablet (It’s the D-Pad and two buttons, just like your NES controller – what’d you expect?), it does seem like an odd omission.

There are hidden rewards to be found for the stalwart player. At 100 stars you’ll unlock stages from The Legend of Zelda, at 130 stars you’ll unlock Wrecking Crew, 155 gives you access to another 25 Remix levels with Remix II which brings with it Ice Climber, Pinball, Golf, and Clu Clu Land. The final stages come as a bonus at 310 stars and round out the 16 remixed titles with Donkey Kong 3, Baseball, Urban Champion, and Tennis. I was surprised to see that Metroid and Punch-Out didn’t make the list of franchises to get some remix love. Also absent was Pro Wrestling which would have made a great replacement for Urban Champion. Starman’s backbrain kicks would settle Donkey Kong right down.

NES Remix is fully loaded with all of the wit and charm that 8-bit gaming can bring, spruced up by some twists. For instance, in one level you’ll play as Luigi where you are tasked with rescuing Mario from Donkey Kong. Upon reaching the top the game says “On second thought, back to the start” and asks you to abandon your fraternal quest.

If you are getting a Wario Ware 9-Volt games vibe, you are on the right track. If you like your old-school gaming challenging, and you don’t mind a few minor hiccups, NES Remix is worth a trip down memory lane. Even if it’s only to watch a real hero like Link rescue Princess Peach for once, though with his track record with Zelda I bet she won’t stay rescued. I bet Samus would have gotten the job done...