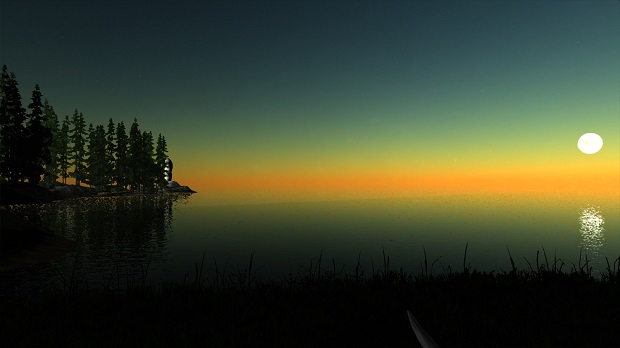 Another rainy morning, another sleepless night. The creature came back. I could hear it prowling around the fire where I made dinner last night, and I can still see the prints in the muddy ground. If I hadn’t found this camp I’d be dead. Stumbling across a camp in the dark was incredibly lucky, but I fear that my luck may be running dry. The fever is back. I can feel the heat off my skin, and I have to suppress the urge to shiver despite the morning’s oppressive warmth. I’m sure I could synthesize medicine from the mushrooms I found yesterday, if I can just make my way back to the lab. I know it should generally be south of me, but when I traveled south I found myself on the shores of a vast bay, leading out to the open sea to the West. In my weakened state I could never hope to swim across. I fear this may be my final entry if I can’t orient myself with my strange surroundings, just another victim of Eden.

You’ll feel like this a lot in Miasmata–it’s a game that can inspire a unique range of emotions from wonder to despair to frustration. Created by a pair of brothers at IonFX Studios, Miasmata will draw you into its island paradise, but you’ll rapidly find that the island has its share of pitfalls—as does the game.

[singlepic id=11106 w=320 h=240 float=left]Playing Miasmata is a distinct experience. Imagine the wandering exploration of Proteus set on the vast tropical island in Far Cry 3, then throw in a dash of Amnesia: The Dark Descent’s survival horror and you have an general idea of what Miasmata has to offer. You play as Robert Hughes, a diseased man stranded on an island in an unknown sea. If you want to survive you’re going to have to find a cure among the island’s flora while staving off fever and thirst, and you’ll have to do it with little more than a map and a compass.

The game has a  surprisingly complex story that operates on three levels. The first level deals with the protagonists present quest to cure his plague and to escape Eden. The second level is a whodunnit mystery, in which you’re trying to learn what happened to the corpses you find scattered across the island. The final storyline is uncovered through notes, photgraphs, and newspaper clippings left around the island, revealing details about the world at large. All three are generally decent, though there are some strange lines. My favorite example has to do with “…the hearts of the so-many discontented men.” The storylines and writing aren’t terrible, but it’s clear that they were not the developer’s main focus. The core of the game is exploration, and the story exists merely to provide some of the wider context for why you wander the island.

The major game mechanic in Miasmata is map creation. Your character must have some experience in cartography because with nothing but a landmark and a compass the man can create detailed topographical maps. You can only orient yourself by triangulating your location against “known” landmarks—landmarks you’ve already revealed on the map, but you can also plot unknown landmarks if you know exactly where you’re standing. You ‘ll be able to reveal large sections of the map if you can find other maps written by the island’s vanished inhabitants.

It’s a pity that the controls aren’t so nice as the mapping functionality   You’ll often want to climb to high ground so that you can scout for landmarks by which to orient yourself, but with the game’s floating, imprecise controls you’ll find yourself inadvertently sliding down the side of a mountain without meaning to jump off.  I can remember at least three different times when the game’s momentum took me over a cliff or had me walking head first into a tree for no reason.  It’s also strange that your charachter seems to be able to climb anything that isn’t a vertical surface.  I had him walking up some remarkably steep canyon walls.  Fortunately, when you inevitably take a tumble down the mountainside, your character seems to take it in stride, rising to his feet without any apparent injury.

Plotting your course using nothing but a map and a compass is challenging, but you’ll feel a palpable relief when you turn a corner on a trail and spot the camp you’ve been searching for. On the flip side, if you aren’t careful, you can quickly find yourself lost on the island, and once you’ve lost your way, you’re going to have a lot of trouble orienting yourself to get back on track. The size of the island means that you can wander for hours without finding a known landmark with which to orient yourself.[singlepic id=11107 w=320 h=240 float=right]

Merely mapping the island is well and good, but it won’t cure your plague. For that you’ve got to pick a few flowers. Each new flower or fungus is a potential cure, and picking one up rewards you with a beautiful hand-drawn picture in your journal. The art in the journal feels just right—it’s exactly what you’d expect to see in a botanist’s field notebook. You can take the plants back to laboratories that are spread across the island to synthesize antipyretic (that is: fever reducing) medicine. You’ll want to make sure you always have at least one or two pills on you or you might find your game in an unbeatable position—you’ll die of the fever before you can find more medicine. Strangely, despite the tiny size of the medicine pills themselves, you’ll only be able to carry one at a time. So if you were planning on harvesting that field for enough medicine to last you a week, you’re out of luck.

Your search for a cure is complicated by the massive, vaguely feline beast that hunts you. Like in Frictional Games’s superb Amnesia: the Dark Descent, in Miasmata you are nearly helpless against the creature. You can threaten it with fire or chase it away with a knife, but you’ll only earn a temporary reprieve. The mechanic is great, but it’s a shame the beast itself doesn’t look all that menacing, especially when it always tended to appear in the daylight. Truth be told, your biggest problem is going to be finding the creature. Supposedly, it actively hunts you, but I waited in one spot for the better part of two in-game days and it never found me, so your mileage may vary.

[singlepic id=11105 w=320 h=240 float=left]Another issue with the game is that the developers seemed unsure how realistic the game should be. Some things—such as the character’s blindness in the dark and inability to sprint more than a few hundred meters—seem rooted in reality, but other aspects are decidedly gamey. The most disconcerting example is how well the protagonist takes a fall. You can throw yourself off a massive cliff and the character will simply stand up, dust himself off, and continue on his way. Once I realized how minimal fall damage was, I found it was simpler to climb a mountain and tumble down the other side instead of trekking all the way around on the paths. The inventory system is also strangely contrived. As you can only hold two or three different plants at once, you have to store your gatherings in storage containers that cause the item to appear at every camp on the entire island. It shatters your immersion in the game, especially when the simplest answer would have been to give the player a satchel or bag with which to carry specimens and medicines.

The biggest problem with Miasmata, however, is that the game is far too long. Despite the vastness of the island, you’ll realize that there really isn’t that much to see. Camps and settlements are spread out over wide forests and swamps. The lack of direction in the game means that you’ll sometimes find yourself forced to backtrack to areas you’ve already visited, which causes the game to drag. There are a few variations—you’ll spend an hour or two in a beautiful bamboo forest—but they’re hardly distinct enough to compensate for the hours you’ve spent trudging along the same trails. . Miasmata would have been a fantastic three or four hours, but sitting somewhere between 8 and 10 hours means that it overstays its welcome.[singlepic id=11104 w=320 h=240 float=right]

If you’re going to be trapped on the island longer than you’d like, it helps that the island is beautiful to look at. The graphics are definitely more than the sum of their parts—each individual tree or shrub looks blocky and false, but when arranged into a massive forest they look surprisingly good. I rarely noticed a tree that had the same shape, which indicates that the designers didn’t try and save money by skimping on tree models. At night the forests transform from wondrous to sinister, blocking out your view of the stars. It was a a pleasant surprise to see how dark night in Miasmata was. You’ll definitely want to find shelter before the sun sets or the sun will find you completely lost when it rises again.

The island’s beauty comes at a price, though. Miasmata’s graphics are fairly glitchy. A particularly annoying problem was the pages of my journal clipping through one another. The game also hitches and drops frames more often than you’d believe. I never had it crash on me, but the overall impression is that there wasn’t a lot of effort put in to QA.

If the graphics are flawed, the audio is phenomenal. Miasmata gets the sounds just right, from the chirping of birds in the forests to the lapping of waves on a beach. The game’s music is sparse—you’ll usually only hear a music swell when you stumble across a cabin or laboratory but the music drives those moments with suspense and ratchets up the tension.

[singlepic id=11103 w=320 h=240 float=left]Miasmata is definitely a unique experience, and as the work of two people it’s actually a hell of an achievement. It’s a game with ambition, which should be rewarded even if it occasionally falls short of the goals it set for itself. If you have a bit of patience for games with graphical glitches, or you have a lot of interest in outdoorsy activities like hiking and orienteering, you might be interested in giving Miasmata a shot.